While exploring Uganda’s whitewater, Kira Tenney and crew eddy out on the banks of Bujagali Falls, where curiosity leads them to a village witch doctor and tales of corporate bribes, unfulfilled promises and more hydropower projects to come.

Don’t believe everything you read.

The dim light shining through the doorway of the mud hut was the only illumination outlining the dreadlocked figure shrouded in smoke. Perched upon a rug, he  was surrounded by a pile of empty plastic bottles, discarded papers and food scraps; the steady sounds of rats rustling in and out of the mounds broke the loud silence. We waited, and after what could have been seconds, hours, or years, the Bujagali witch doctor opened his eyes and acknowledged our presence with the slight elevation of one dark hand.

How we got to that hut was grounded in the gravitational pull of water. The Nile River in Uganda boomed from the heart of Africa centuries before kayakers paid pilgrimage to her levitation-charged waves, wide channels, and titanic holes. But in March 2011, Bujagali Energy Limited (a partnership between two companies, one US-based) closed off river access to the “Day 1” section for the final stages of dam construction, which began in 2007. The most common whitewater stretch for rafters and kayakers, it included such rapids as Bujagali Falls and Silverback.

I had the privilege of kayaking that section just before it officially closed, and can vouch for the high-volume water and its characteristic pick your poison, offering endless ways to go as big and friendly, or as full-on as you wanted. Completion of the Bujagali dam flooded the Day 1 section of the Nile in the fall of 2012, as a large placid reservoir coated the ledges and rocks formerly exploding with whitewater.

Two years later, after three weeks of riding the waters of the mighty Zambezi beneath Victoria Falls, six days in an empty overlander, a night spent in between the borders of Zambia and Tanzania amidst the bustle of teaming wheelers-and-dealers of currency and mayhem, two public buses, a boda boda, and three extra days on the road (“Africa time”), we eventually made it to the quiet reservoir-side town of Bujagali Falls, kayaking on the Nile, and, now, seated on the red dirt floor of the witch doctor’s hut. He gestured toward an offering basket, and the man that had led us from the yard into the hut handed it over. 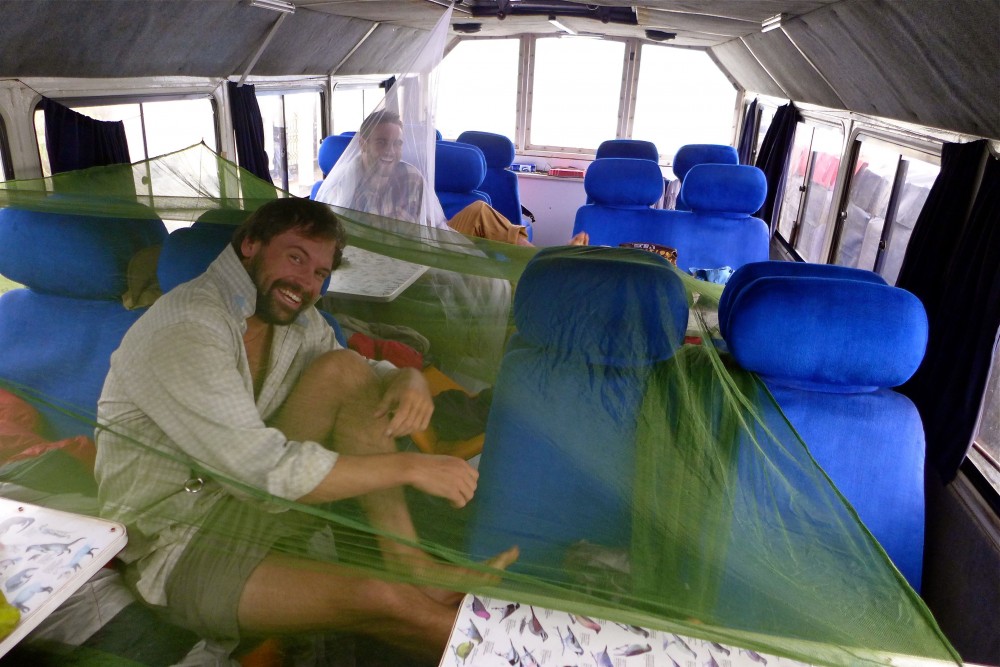 The mystic shifted his dreadlocks as he slid out of his pleather jacket and into a traditional bark cloth cloak. During the process, he casually glanced in the basket after it made a first round, a second, and then a third. He disapprovingly shook his head at the increasing mound of money each time it passed. Simultaneously, he continued to transform into an icon, adding on layers of shaman schwag, stalling until “give what you can” became a specified USD amount much higher than what we had been told would be appropriate. The witch doctor was a businessman and he wasn’t budging in negotiation. We looked at each other. We were already in, so we went all in.

He finally nodded and Enoch, our friend from Nile River Camp, translated that we were free to ask questions.

The voice was raspy and projected slowly, as if time did not exist. It told the following:

The rapid Bujagali Falls used to be a sacred site not just to the region, but to all Ugandans. School groups, as well as domestic and international tourists alike would visit the falls, their cascades home to a particularly high concentration of spirits and ancestors, misting not far from the source of the Nile (the longest river in the world). It is the witch doctor’s job to communicate between the people and the spirits, and when he asked the spirits what they thought of the construction of a dam, they were not happy about it. They said it would be bad. 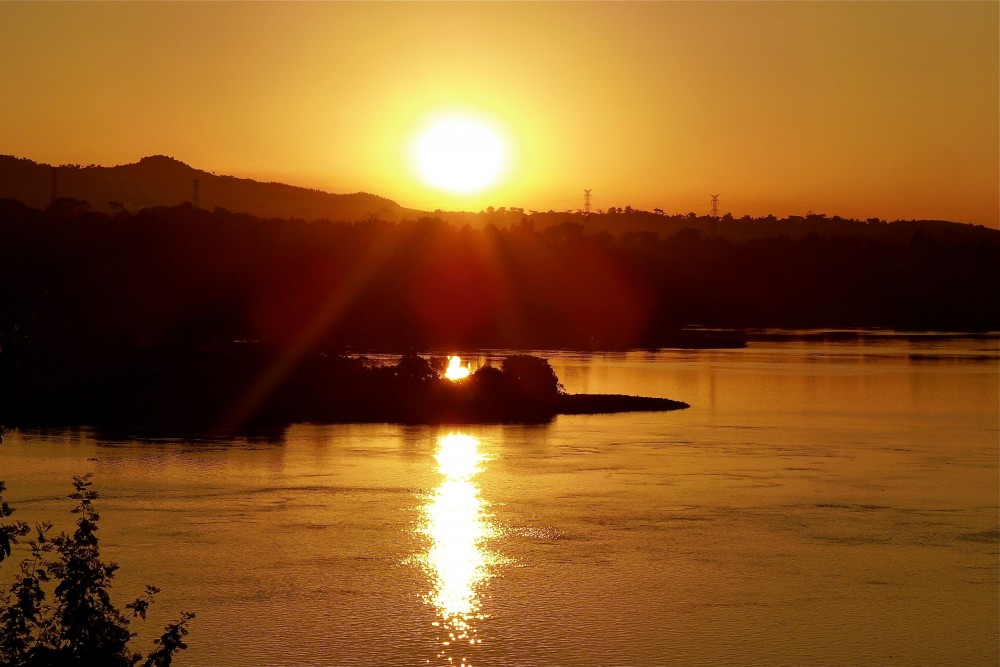 But, then he decided to talk more with the spirits. He told them that for progress, the dam would be a positive endeavor. Eventually, they were convinced, and so he resounded his all-knowing message to the local and widely connected community: the spirits were in accordance with the hydropower project.

Now that the dam was complete, we wondered if the spirits were pleased.

Well, they feel fine, but the witch doctor is not happy. The World Bank and Bujagali Unlimited promised him free electricity and two years later, he lives in the dark; he has to survive by the light and power of fire in his hut and endure the flame-thrown smoke.

Feeling time-warped and exhausted, we emerged from the hut and wandered down the red dirt street of Bujagali Falls to schedule transportation for the day’s kayaking. Since the completion of the most-recent dam, the former put-in town was a mix of open shack shops and boarded-up, derelict ones. There were fewer river tourists, but many wandering locals wanting to tell you their version of how the dam came with unfulfilled promises, and of residents still finding themselves without power, and without work. 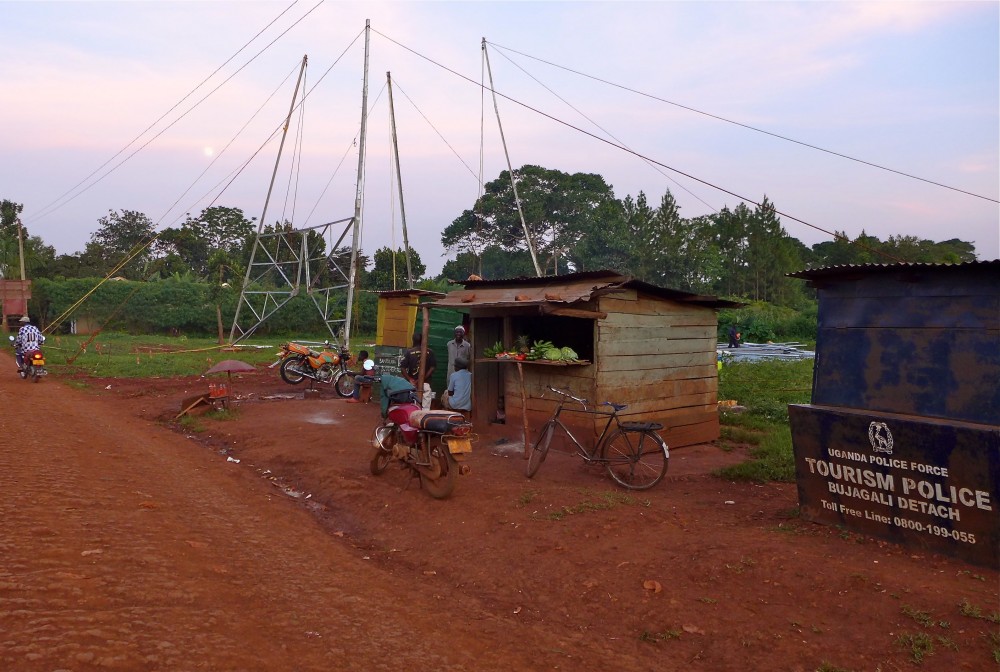 While boda boda drivers that used to depend on the steady stream of kayakers were among those frequently out of a job, the Nile River Explorer’s (NRE) bar and restaurant staff explained that their business was about the same; they simply had a different clientele. Apparently, in the absence of the large groups of partying and loud kayakers that used to dominate NRE, a quieter crowd of volunteer tourists has moved in. The now lake-side establishment actually guessed they were saving money as tables, glasses, etc. weren’t constantly in need of repair from nightly parties that would rage until sunrise.

Trip logistics for some rafting companies now involved driving farther downstream to the “Day 2” section of the Nile. This section includes Itunda and Nile Special and still ranks the top of the world in terms of a play-boating mecca. Local businesses varied in terms of repercussions post-Bujagali dam. Rafting numbers were down, but Kayak the Nile (KTN) has continued to grow and thrive with its combo of world-class coaches and sections of river for all ability levels, as well as their SUP and flat-water options. Overall, the rafting and kayaking industries float on. 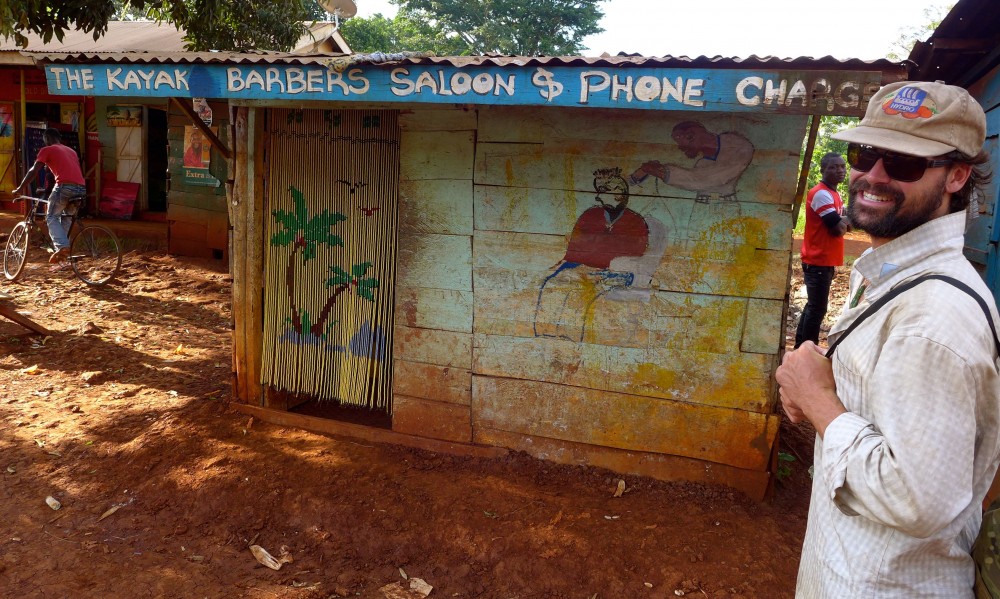 We reached the kayak office and the guys smiled as we recounted our morning’s tales of the witch doctor. Word on the street was that the energy companies had paid him $30,000 USD to proclaim to the locals that the spirits were at peace with, and in favor of, the dam. In regards to the international news scene, the loss of tourist recreation was nothing, but loss of a native spiritual site had a history of getting the entire globe up in arms, and that was worth bribing influential local residents to avoid. Rumor has it, the witch doctor took the money, let everyone know the dam was an all-go on the spiritual front, and retreated to the capital city of Kampala, where he blew all of his cash in less than two years. Now broke, he had recently moved back to resume his position as spiritual leader in the region.

If there is truth to that story, the witch doctor’s side business may thrive in the near future. Another dam is proposed farther downstream that would potentially flood anywhere from the entirety of Itunda to just below Nile Special. In other words, drown some, or most, of the Day 2 section. Many of the local river-related business owners believed that due to environmental, logistical, political and financial hold-ups, it would be at least another seven years before anything happened.

While we were there, one of the KTN kayak coaches interested in tracking the story went down to the site to investigate further. What he found, no one expected to see yet—road construction and the growing base for a Chinese-funded hydropower project in full swing. Seven years no longer seemed that far away.

No matter what, stories are different based on who you talk to, whether it is about the past, present or future. Especially in the case of foreign hydropower projects, no one seems to know what’s going on, how it happened, or how it’s all going to play out. Simply put, it’s complicated. But floating amongst hyacinth and launching off some of the world’s best waves to the backdrop of an African sunset is not. 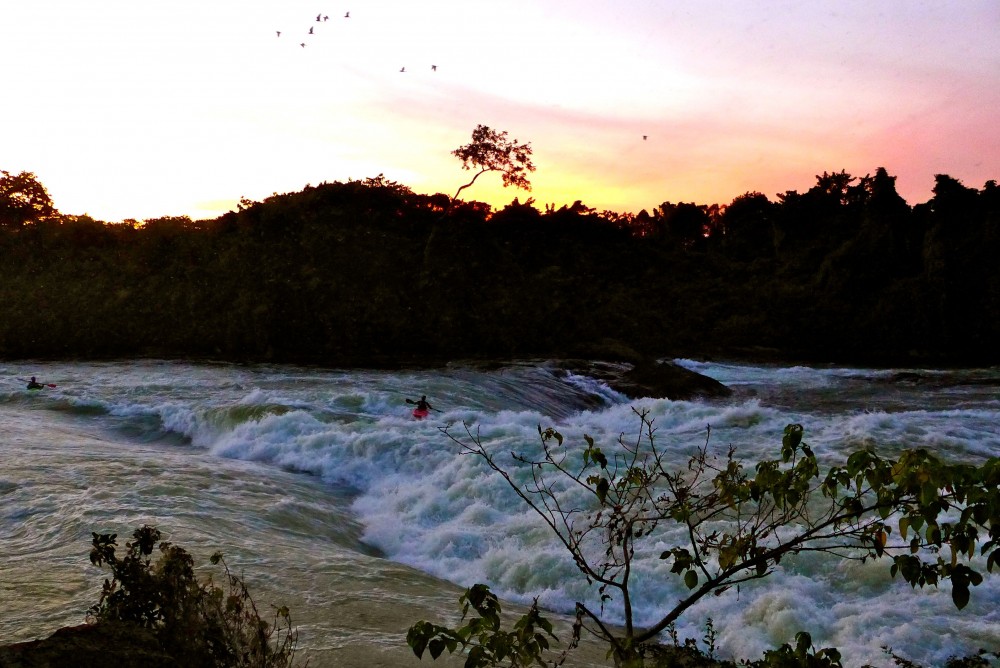