The Deerfield in Two Words: Whitewater and MassMoca

I have a few passions in life: whitewater kayaking—or any kind of kayaking—food—my nickname is “Snacks”—and music. My choice of music is about as broad as my kayaking. I’m happiest when I’m on the river, eating a donut or when I’m listening to a damn good song. And I just so happen to live in an area that provides both on a regular basis. Welcome to North Adams, Massachusetts.

I don’t actually live in North Adams, but I frequent its amenities. My town, Readsboro—you’ve probably never heard of it—is closer to the whitewater, but only has two restaurants. It’s one of those blissfully small towns. But North Adams is a tiny little city, by northeast standards, with about 13,064 people. It’s actually the smallest city in all of Massachusetts but it has a big heart and some hustle. Home to the largest contemporary art museum in the entire country, MassMoca is the reason this town has my heart. MassMoca has an amazing outdoor venue that boasts the likes of Wilco every other year and the fabulous Fresh Grass Festival each September. And before you ask, yes, I’m always in attendance. 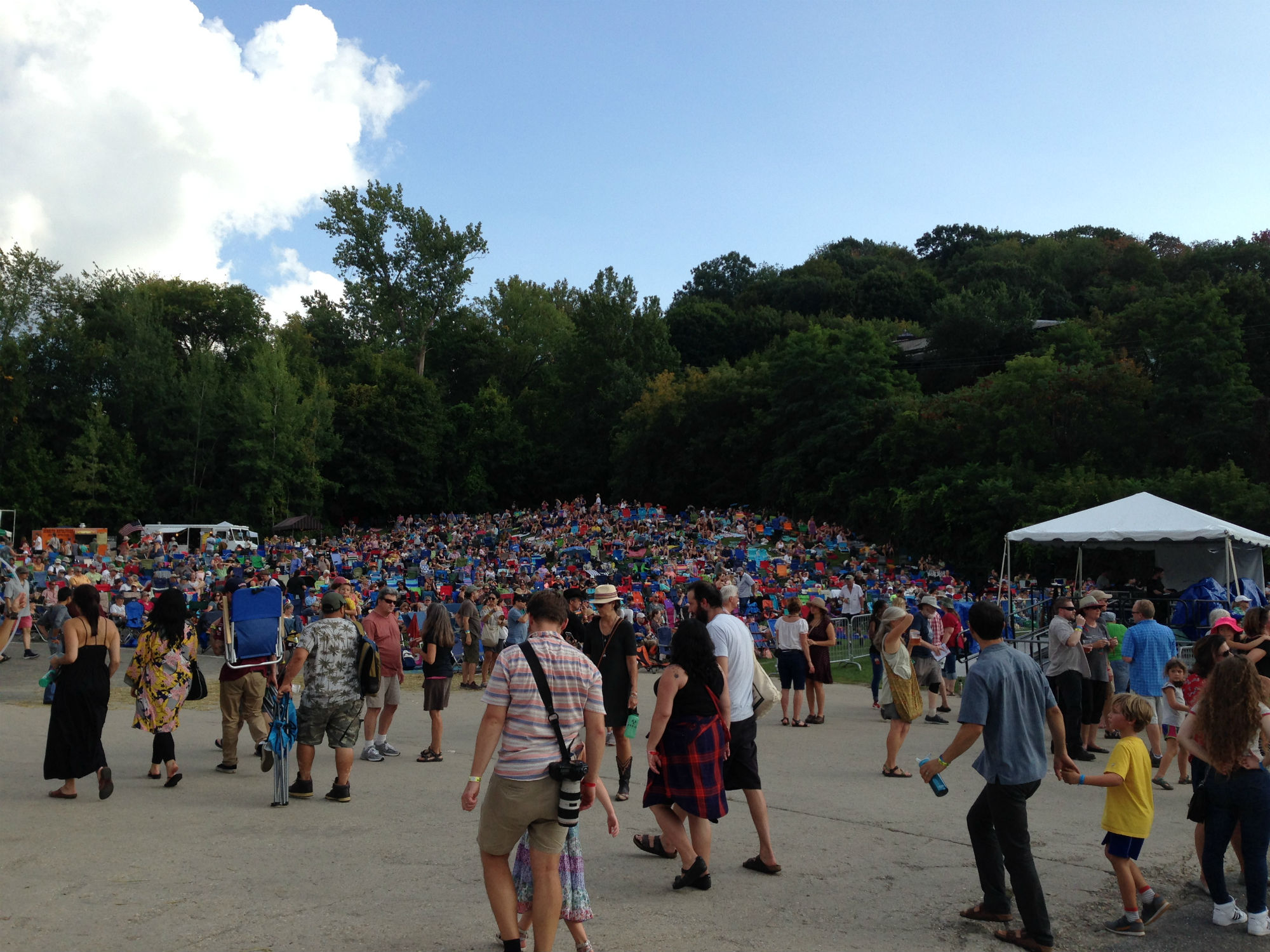 The venue is family friendly. Kids are always running around, dancing and playing, which really embodies the venue’s chill vibe. Kids six and under are free, kids 6-16 are pretty cheap, so it’s easy for families to come and not break the bank.

I’ve seen so many shows here from Old Crow Medicine Show and Sarah Watkins, The Devil Makes Three and the Wood Brothers, just to name a few. During some of the night acts a freight train comes by MassMoca literally so close that the field shakes. One night during Fresh Grass the train charged by and Glen Hansard stopped mid-song and went into “Train, Train” with his band and the place went off. It was incredible. The train was screeching and blowing its horn, the crowd was going nuts and Glen Hansard and his band just killed it on stage. It was seriously one of the coolest things that I have experienced at MassMoca. The crowd always goes nuts when a train comes by but that particular time it was next level. 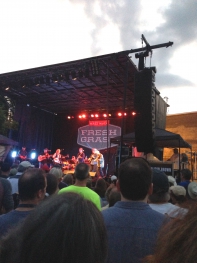 The absolute best part about the live music scene in North Adams, though, is that you can bookend your weekends with solid paddling sessions.

The Hoosic River, a tributary of the Hudson, flows directly through North Adams, but it’s probably not the northeastern river you’ve heard about. However, a mere thirty-minute car ride away is the Deerfield. The Deerfield is rumored to be one of the most heavily used rivers in the country with a dam almost every seven miles of its entire length. But luckily, like most of the best paddling spots in the northeast, scheduled dam releases let boaters reap the benefits of the Deerfield. 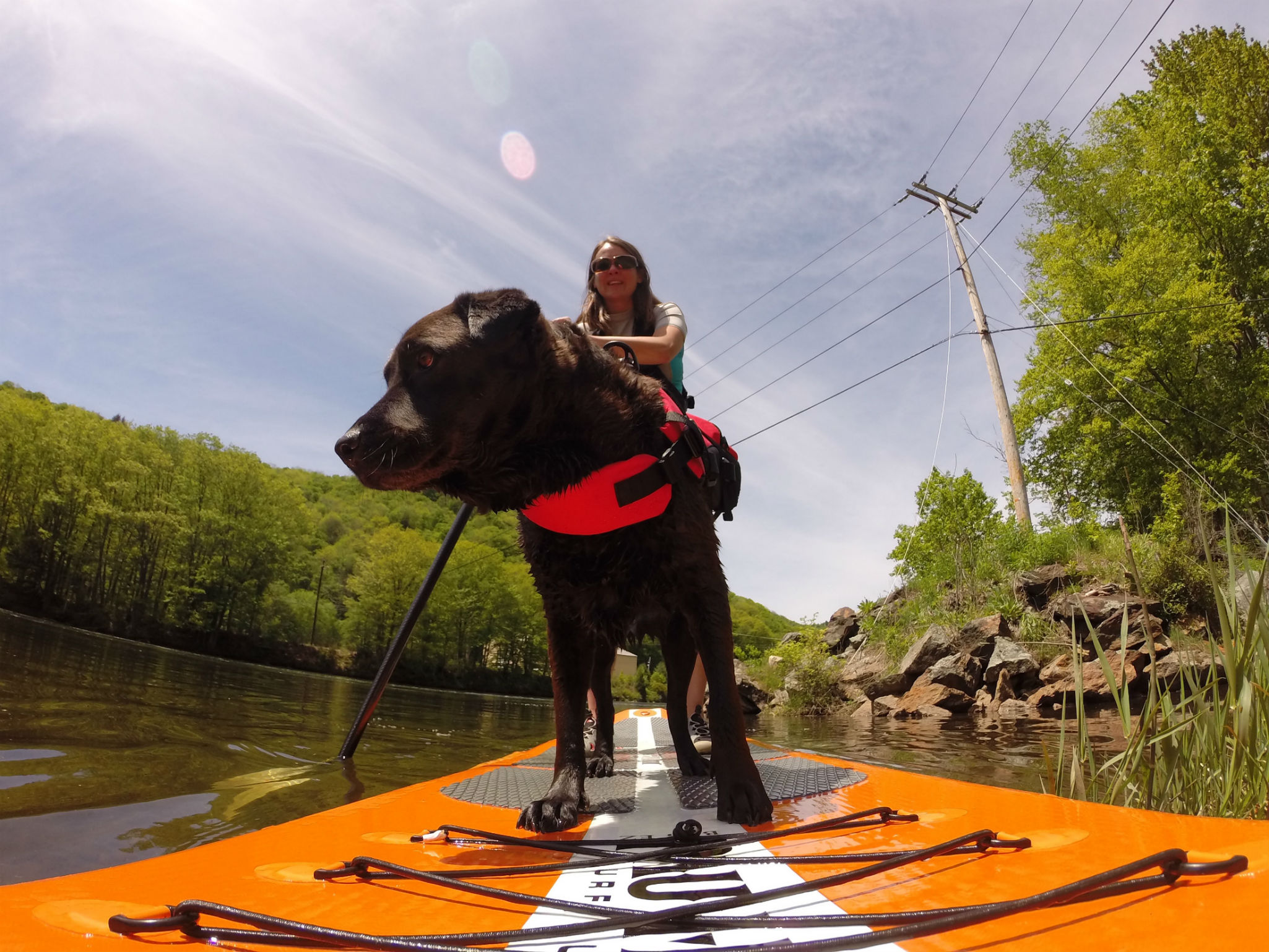 The Deerfield literally has it all. From creeking to smaller rapids suitable for beginners, squirt spots to flat water. The summer and fall are your best times to get guaranteed whitewater. Dam releases offer great paddling on two sections of the Deerfield River: the Dryway section, which brings in class III/IV runs and the Fife Brook section, which is an easy class II run with one class III. The lower Fife Brook has a world-class mystery spot for squirt boating called Consumption Junction. If you’re lucky and like creek boating maybe the West Branch of the Deerfield will be in but that’s rain-dependent in the summer and fall. And then the Sherman Reservoir offers easy access to flatwater paddling, swimming and the chance to see Bald Eagles. I see them the most on the Sherman Reservoir.

The Dryway is an easy shuttle just a couple miles long. Bring all your boats so you can get as many laps as you can during a four-hour release. It’s about three miles long with enough boofs and rock splats to fulfill your rock tagging dreams. If plastering yourself on rocks isn’t your thing then you will have the time of your life catching eddies and hitting ferries all over the place or just run straight through each rapid. Oh, and Bald Eagle sightings are prevalent at the take-out.

The mighty Fife Brook is the easier section where I learned how to kayak. It’s an easy shuttle and most people do just one run. It’s about five miles long. It’s a great class II for beginners to learn the fundamentals and for people who just like something mellow. Then there’s the Gap. It’s a short class III rapid that has been putting the fear into beginners for thousands of years. It’s a pretty dramatic rapid compared to the rest of the run. I remember getting close to the Gap as a newbie, my heart was pumping, my mouth went dry and my arms turned to jelly. Regardless, it’s a great way to end the run especially when you style it!

One of my favorite spots on the entire Deerfield River is Consumption Junction on the lower Fife Brook. It’s where the Cold River meets the Deerfield River and it creates a world-class mystery spot. It’s a squirt boaters dream! Gives up some nice deep long rides in an underwater playground of bubbles, whirlpools, and different depths in the green room.

Outside of Readsboro, the West Branch of the Deerfield is a classic New England creek with a gem of a class IV/V run that’s about four miles long. It runs off of snowmelt and is rain dependent. The creek runs off of Rt.100; it’s an easy shuttle and it’s roadside so it’s easy to scout or walk a rapid like Tunnel Vision, the hardest drop on the run. It’s my favorite section of the Deerfield River and it’s my all-time favorite run. 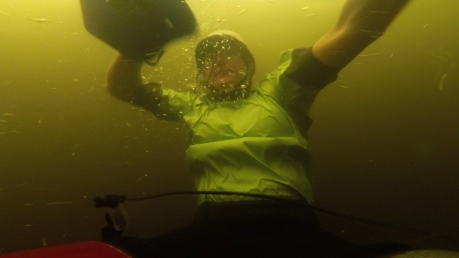 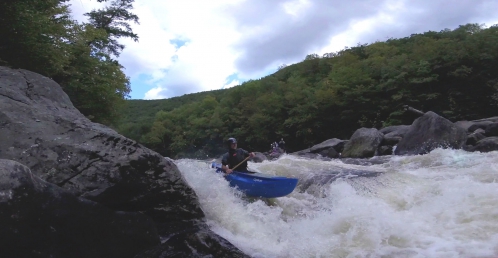 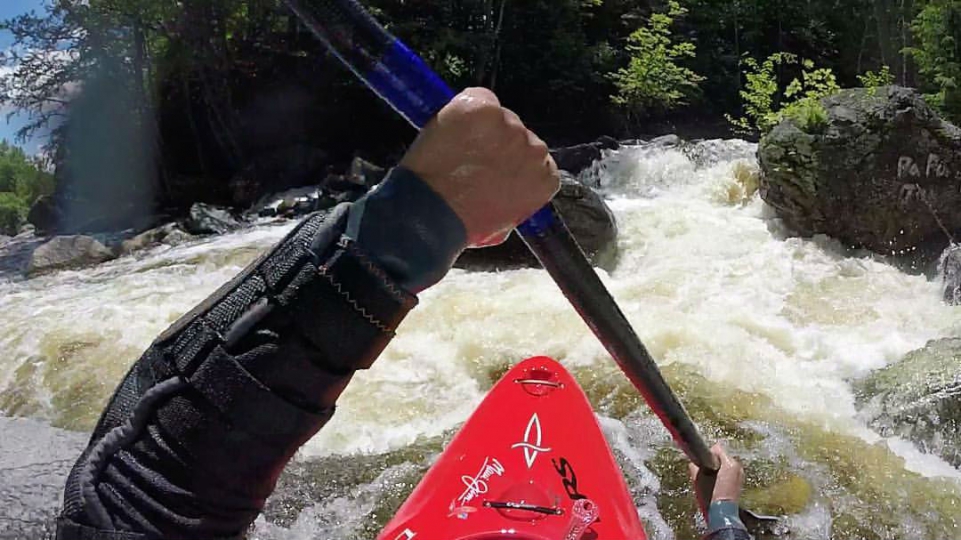 I know we all have that one friend who just doesn’t paddle. (Shocking, right?) But if that one friend doesn’t paddle, surely they mountain bike. Charlemont, thirty minutes south-ish of North Adams, is a tiny town in northern Mass that’s a recreational mecca. It has an awesome trail system to get your cross-country mountain biking on. If downhill biking is your thing, Thunder Mountain Bike Park is an epic downhill park. It’s insanely good. If someone in your group or family doesn’t like biking (or kayaking…) Zoar Outdoor has canopy tours, SUP rentals, sit on top kayak rentals, and rafting, so there’s no excuse for someone not to get outdoors and enjoy nature! To top it off, there’s plenty of hiking all around the area, whether you’re hiking around the Deerfield River—I recommend Dunbar Brook Trail—or hiking at Greylock Mountain in North Adams, the largest peak in Mass at 3,491 feet, there’s simply something for everybody.

Western Mass and southern Vermont have beautiful fall foliage and there’s nothing like paddling on the Deerfield River when the leaves are popping crazy colors. You can hit up the local apple orchards. I recommend Bear Swamp Orchard and Cidery in Ashfield, MA owned by the Gougeon’s. You can pick your own apples, and they make hard cider, sweet cider, vinegar, jams/jellies, baked goods and maple syrup. All organic and you’re supporting a local paddling family. 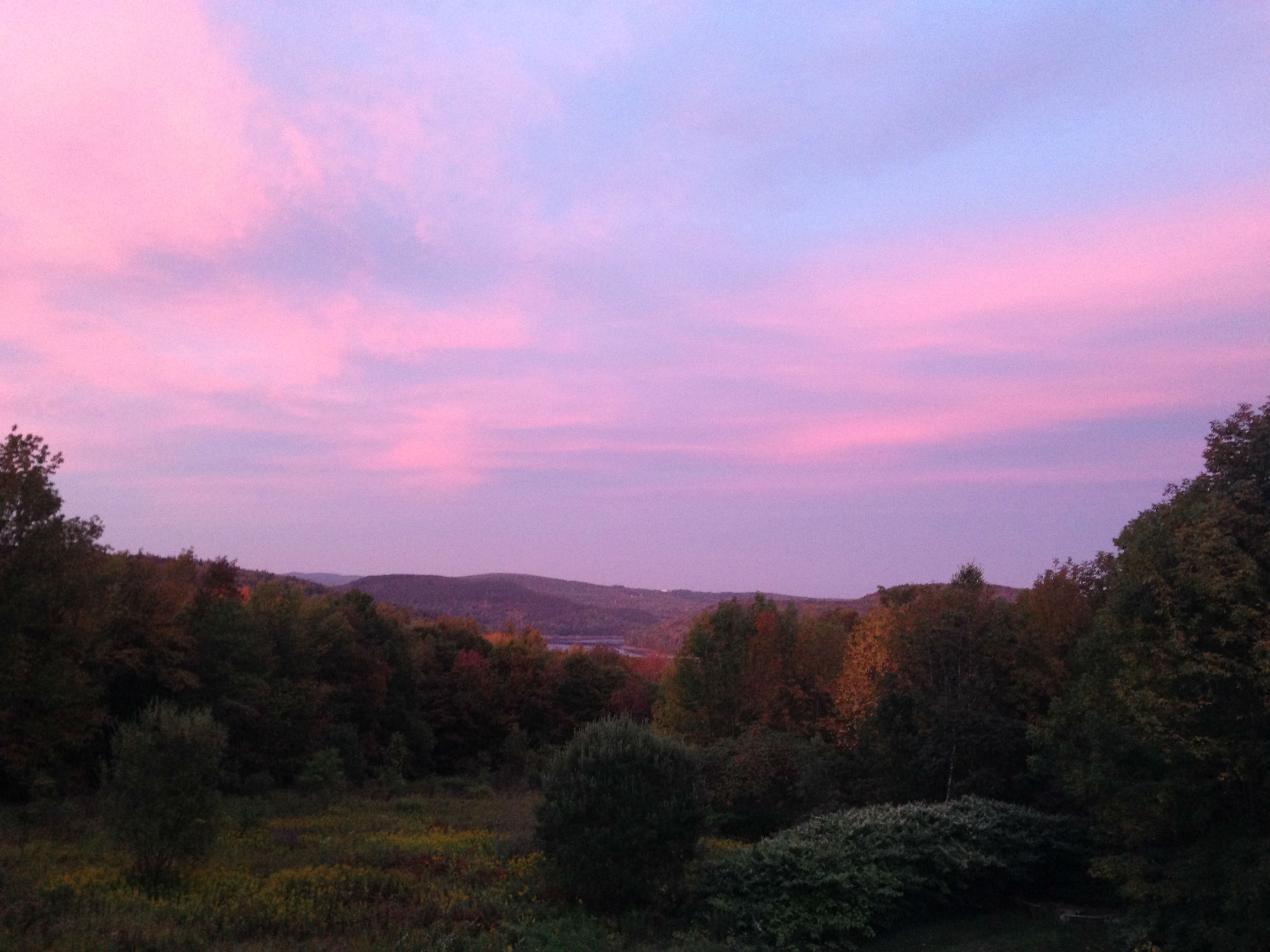 The Hoosac Tunnel is a historical site right off of the Deerfield River. Starting in Florida, MA and ending in North Adams, it runs 4.75 miles through the Hoosac Mountain. It originally offered an easier route from Boston to Albany and at the time of its construction was the second longest tunnel in the world. It has a bit of a macabre past though. Construction started in 1851 and by the time it was finished in 1875 around two hundred men had died, earning it the nickname “the bloody pit.” It’s still an active railroad to this day and monitored by the railway police, so be careful when you’re visiting. But it’s definitely worth a stop as you make your way to the river. 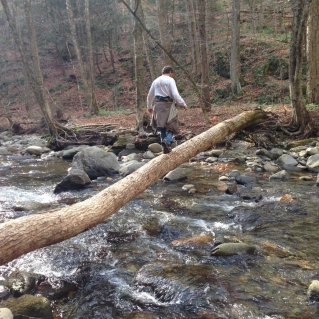 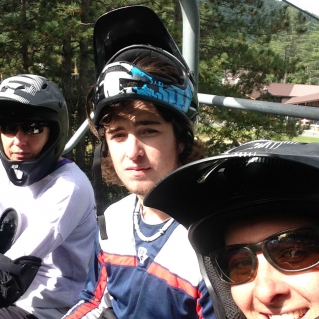 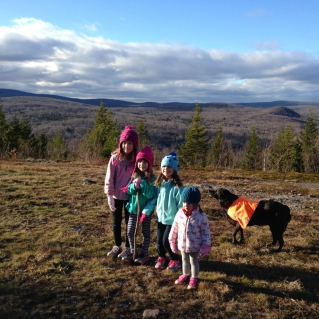 Camping is offered during the summer and fall music events at MassMoca and shuttles are available so you don’t have to worry about driving after you’ve spent an awesome night listening to music, eating local food and drinking local beer. Like I said, I’m at MassMoca events year around. They tend to have the same local organic vendors, and I’ve literally eaten from every one of them. They’re all extremely delicious but my favorite is, hands down, the Mad Taco from Vermont. These tacos are so flipping outstanding with tender, juicy pork or chicken on a corn tortilla topped with a habanero/mango salsa and pickled cabbage. It’s outstanding! I wash it down with a local IPA from Berkshire Brewing, which brews a special beer specifically for the music event. Meaning, you won’t find it on your local shelves. I could go on about the food forever but I’ll just leave you with this: Deep Fried Cream Cheese Cake.

If you aren’t into camping or want to turn your night of live music into a weekend paddling/music trip, stay at the Readsboro Inn in Vermont. It’s only ten minutes from the Dryway section on the Deerfield, twenty-ish minutes from North Adams and home to yours truly. Of course, there are plenty of places to stay in North Adams but I’ve got to give my town some love. The inn’s owner, Marcia is awesome and the food is really good. I love the fish and chips and I grew up in New Bedford, MA so I know a good fish and chip. Make sure to get a side salad with the house dressing, a maple vinaigrette that’s ridiculously good. In the morning before you head out to go paddle, stop and get breakfast at Always Emma’s. The breakfast is top notch, especially the Fenway Omelet. Local tip: Never be in a rush in Readsboro; we run on our own time.

This is it, the Deerfield River area has a lot going on. Even the boaters who come up every weekend to paddle don’t fully take advantage of what the area has to offer. I could seriously go on forever but I won’t. I’m lucky to live so close to an awesome river and so close to MassMoca. You really should consider coming over to our area and experiencing it for yourself with family and friends. 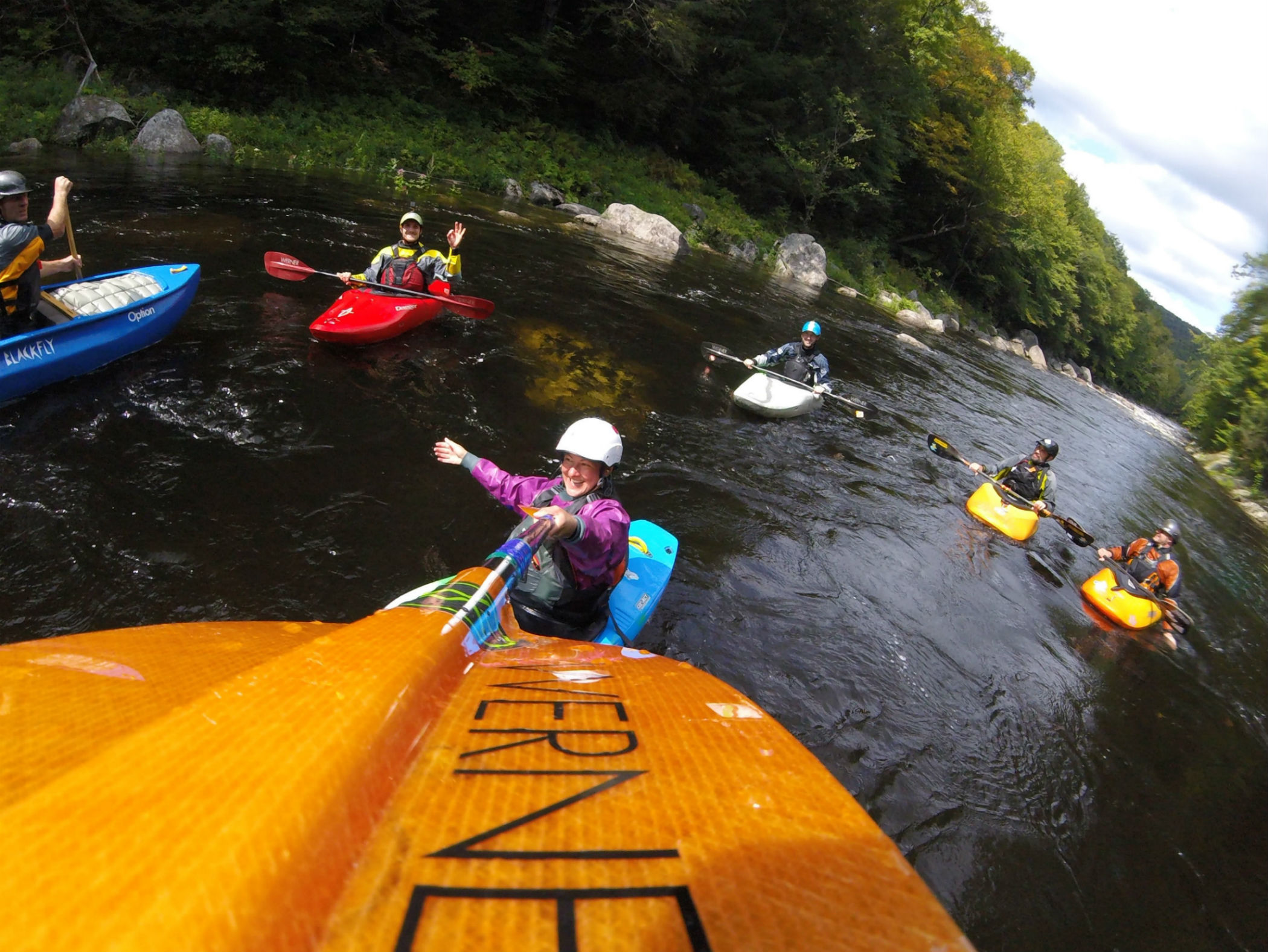