There are three things that make whitewater kayaking possible: a boat, some gear and a river. It doesn’t matter what brand of boat you paddle or how new your gear is. The only thing that truly matters is the existence of whitewater because without it, there is no whitewater paddling.

Every year, every month, we lose rivers of the world. Dams, diversions and hydro schemes turn free-flowing whitewater into stagnant reservoirs and dry riverbeds. Of the people paddling worldwide, a small percentage of them are taking action to save our rivers. But those that take time off the water to fight for rivers should be valued, respected and supported.

2018 marks the 50th Anniversary of the Wild & Scenic Rivers Act, legislation that protects rivers across the U.S. from development. NRS already has a strong presence supporting river conservation in the States, including partnerships with American Whitewater, American Rivers and the 5,000 Miles of Wild Campaign for Wild & Scenic Rivers. But NRS realizes that the fight for free-flowing rivers is a global one, which is one reason we’ve chosen to extend that same support to river conservation movements in Europe. 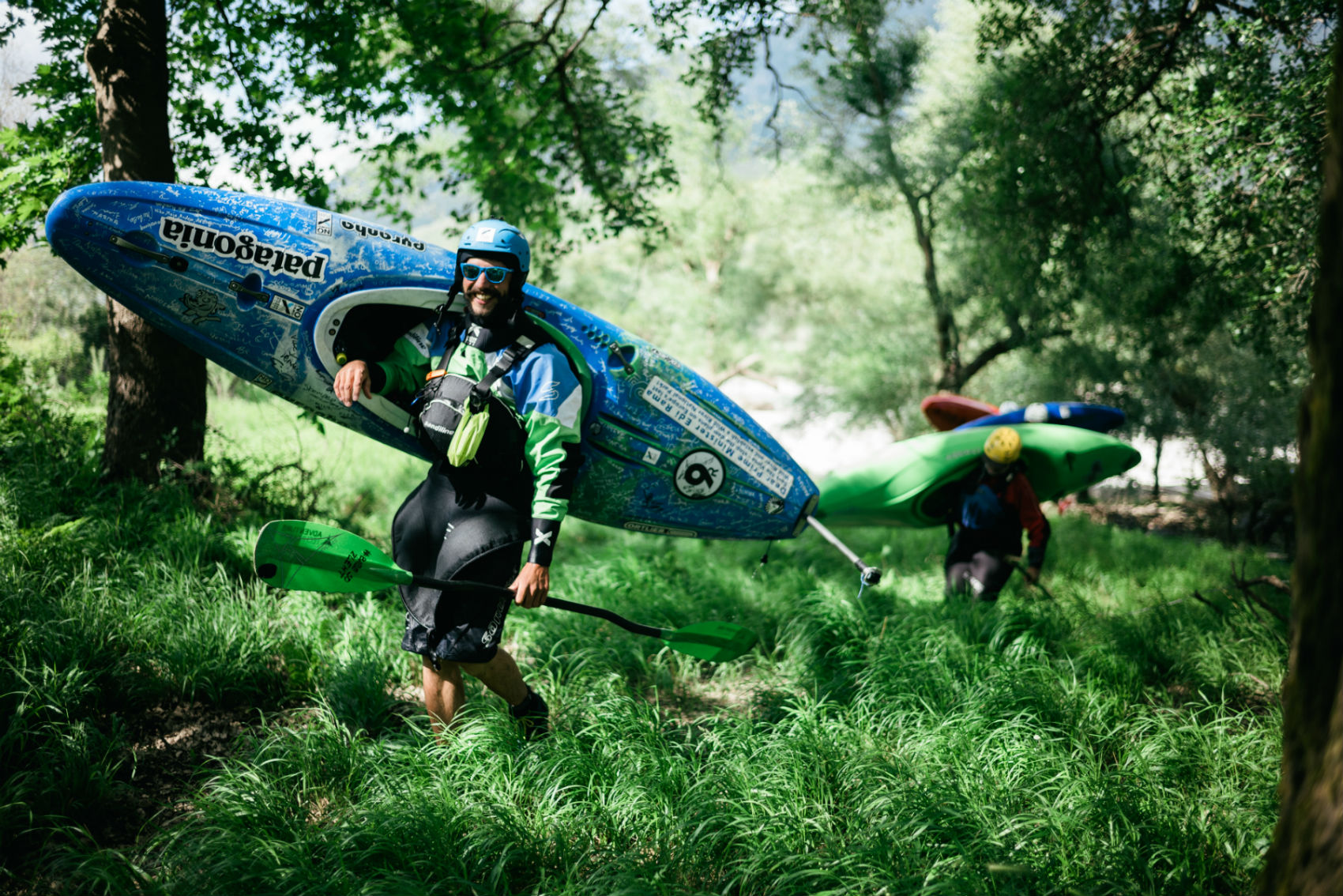 Paddlers protecting rivers is something to be celebrated and supported and we’re stoked to announce two new partnerships in 2018 that will help keep precious whitewater flowing fast and free.

When Welsh kayakers, Dan Yates, Tom Laws, Barney Prees and Rob Litherland, came together to fight for the protection of their local run, Fairy Glen,Save Our Rivers (SOR) was created. Balkan Rivers Tour (BRT) came to be as a kayaker took on 23 rivers of the Balkan Peninsula to raise awareness of the planned construction of thousands of hydro dams in the area. Two different movements, one idea: river conservation through kayaking.

Slovenian kayaker and BRT founder Rok Rozman and Welsh kayaker and SOR headman Dan Yates discuss their organizations and what a partnership with NRS means for 2018 and beyond. 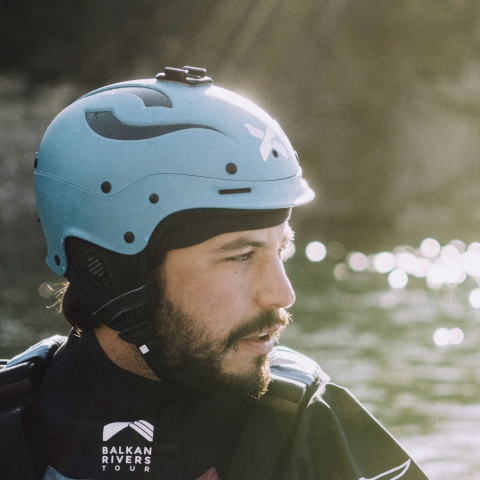 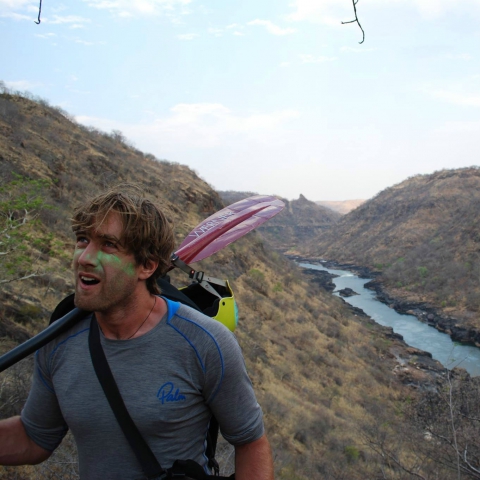 Why are your rivers worth fighting for?
DY: The rivers of the Snowdonia National Park in Wales are pretty unique. Amongst the heavily altered landscape of the UK these last free flowing rivers are the only truly wild spaces left. Many rivers provide breeding ground for the threatened Atlantic Salmon and the humid river gorges are home to some of the only colonies of oceanic ravine bryophytes (i.e mosses and liverworts) worldwide. Oh yeah, and there is some pretty rad whitewater to be found as well including the world-renowned Fairy Glen.

RR: From Slovenia to Greece, the rivers of the Balkans are a special mix of pristine nature, endemic creatures, stunning colors, great vibes, interesting cultures and amazing whitewater. Many of the rivers carve gorges into the deep limestone deposits and produce world-class rapids from steep mountain creeks to playful, high volume runs. Some rivers, like the Soča, flow to the Adriatic Sea and you can paddle over beautiful marble trout. In rivers that flow to the Black Sea, like the Sava or Tara, you will be blown away by the massive huchen swimming under your boat. These are the last intact rivers of Europe and they’re hiding so much more than just ecological treasures, they are the source of myths and stories and something people still rely and depend for everyday life. 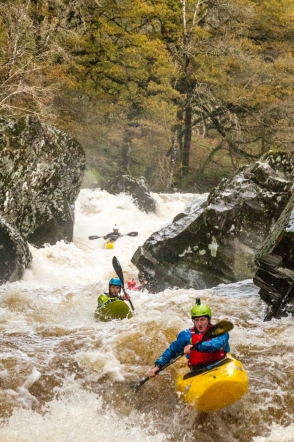 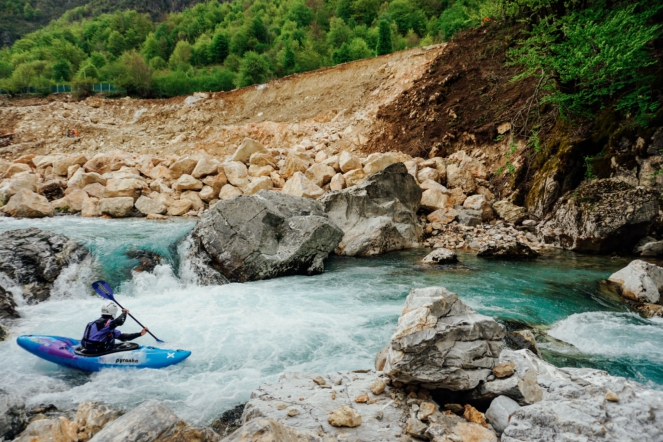 How did you start a kayaker-founded river conservation organization?
DY: Save Our Rivers is a few kayakers that got together to fight a hydro scheme on their local run, Fairy Glen. We realized we could be successful working together with outdoor people within traditional conservation groups and are keeping at it now, working on National Park protection in Wales.

RR: The Balkan Peninsula has always been a special zone, both politically and geographically. It’s a very diverse region with many steep rivers flowing from the European Alps and Dinaric Alps.

With changes to the political and economic situation over the past few years, more open markets and few wild rivers to dam in western Europe, more than 3,000 dams are planned, fueled by corruption and under the guise of ‘green energy.’ Not a single river or stream is safe. While larger nature conservation NGOs have shed some light on the issue and started the fight against the dam-craze on a slow-moving but important legislative level, the Balkan Rivers Tour took a grassroots approach and decided that people who enjoy and live next to these rivers should take creative action and demand their rights. BRT is basically a crazy idea to stop neo-colonial enterprises from destroying the last pristine rivers of Europe.

This idea was fuelled by a hope that we can stop this dam building craze in the Balkans with a simple approach of kayaking. We are giving our paddling a purpose, and in a way, it helps river conservation from becoming too overwhelming.

A beer-counter idea turned into a month-long tour that brought kayakers and outdoor lovers together to show the world the scale of the problem of dam building in the Balkans. 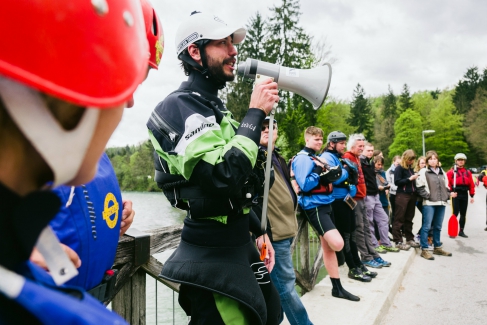 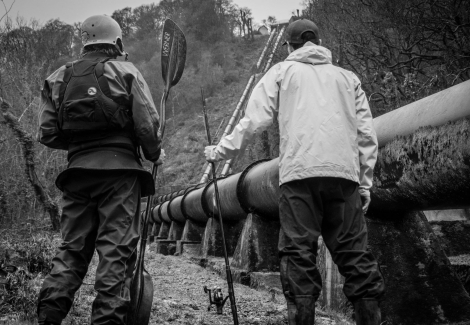 How does BRT and SOR fight for rivers?
DY: A big part of our work is producing professional quality responses to government consultations or planning applications likely to affect an important river or area. We commission our own scientific research and gather expert testimonies when required. We call on the great community that follows us to sign petitions or submit responses based on the evidence we gather. We also give talks and run events based on the importance these rivers have to our wider environment and the threats they are under. And we paddle.

RR: We are fighting with our paddles and creativity instead of aggression. BRT helps organize protests, direct actions, little acts of civil disobedience all the time making sure lots of paddling happens. We want to show that these rivers are worth more untouched than impounded behind dam walls. We promote alternatives to aggressive development, by encouraging less consumption and sustainable tourism where people come to experience pristine nature without destroying it. 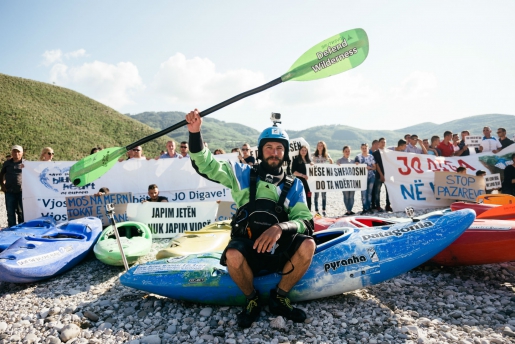 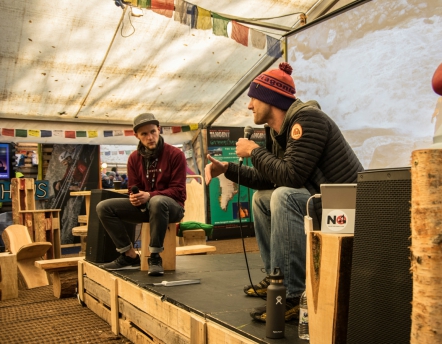 Tell us a bit about past projects and future projects.
DY:Save Our Rivers is currently objecting the Welsh Government’s plans to reduce the environmental protection afforded to our National Parks. Check us out on Instagram, Facebook or through SaveOurRivers.org to follow our #NationalParksUnderThreat campaign.

RR: Right now we are working on getting BRT supporters involved year round through a new web page, a membership platform and quarterly newsletter. Through these communication tools we wish to create a strong network of local NGOs, kayakers, universities and individuals that will function as a real grassroots movement that will be hard to hold back. And then, sure, organizing the third edition of Balkan Rivers Tour in fall 2018. More protesting. More kayaking. And more good times! 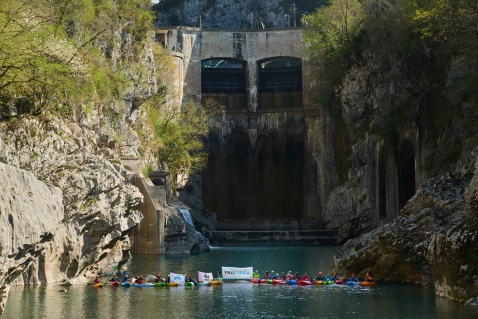 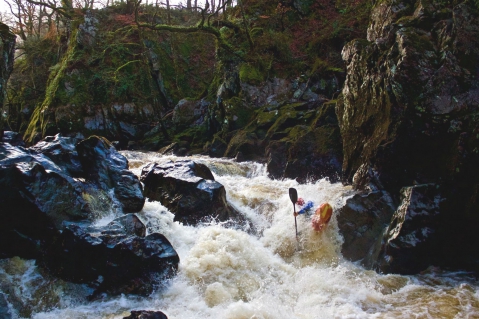 What excites you about joining forces with NRS?
DY: In the beginning of SOR, we saw the films NRS was producing about the White Nile, China’s Salween River and the Colorado River, it made us realize there were other boaters working on river conservation. It made us feel less alone. Joining forces with NRS will help push our messages further and reach more kayakers who are concerned with river protection. Growing our audience is the most important thing: more engaged kayakers mean more people fighting for the places we love.

RR: Through the blog and the community NRS has created, it’s clear they believe rivers are more than just playgrounds. Their support means we’re joining forces with like-minded people (and being a bit bigger always helps because the guys we are fighting against are huge). BRT will stick to our grassroots beginnings but we’re hoping for more supporters. If our partnership with NRS inspires another kayaker-based grassroots movements to fight for rivers in other parts of the world, we would be stoked, fostering the realization that we shouldn’t wait for others to do something, we need to do it ourselves! 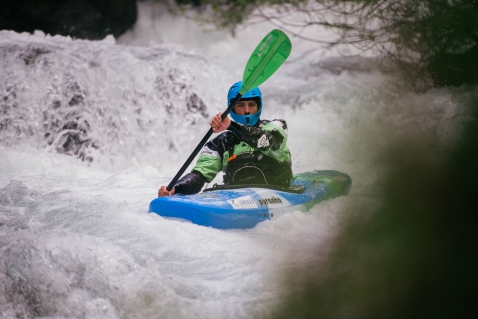 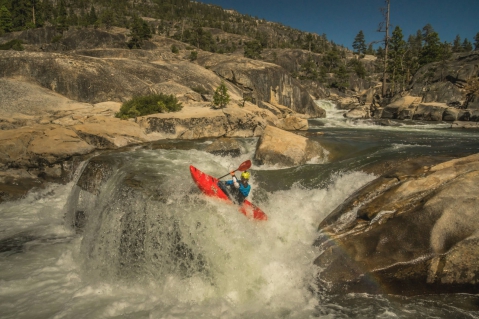 Have you experienced any wins for the rivers?
RR: To us, success is every threat we get from a hydro lobby, every bear hug by a local who helps by fighting for their home river, every flotilla or joined action with other NGOs and every dam stopped. Behind all of these there is loads of work, passion and also luck and celebrating them always feels good.

DY: Our biggest success story has to be stopping the hydro scheme planned for the Fairy Glen gorge of the Afon Conwy, whitewater test piece of the UK. After all it’s the reason Save Our Rivers (then called Save the Conwy) was first formed. We formed a coalition of kayakers, fishermen, traditional conservation bodies and community members in objection and over three years fought the application until it was withdrawn. 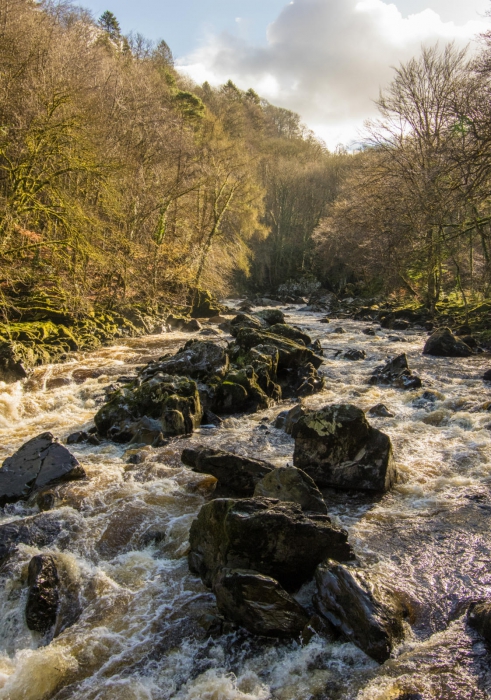 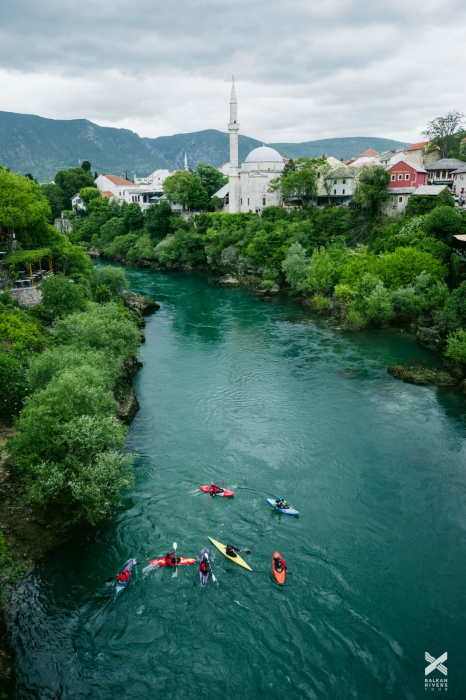 The bottom line.
RR: This partnership is a good base for more actions like BRT to sprout. We can be the simple proof that it can be done. We are not superhuman, we are just little kayakers, but despite that we somehow made it. You can do river conservation from a raft or a sup or a sea kayak too, so go for it, give your paddling a purpose and have fun out there!

DY: We just love getting out and having good times in wild space and wild rivers. We want to give a little bit back and I think it gives us a new level of understanding and enjoyment when we go out and use those places.

Unlike skiers or bikers, whitewater paddlers don’t have to worry about lift tickets or trail building. Whitewater is a free resource, and the vital component of our sport. Without wild whitewater, our sport would cease to exist. How will you get involved in the fight for our rivers in 2018?