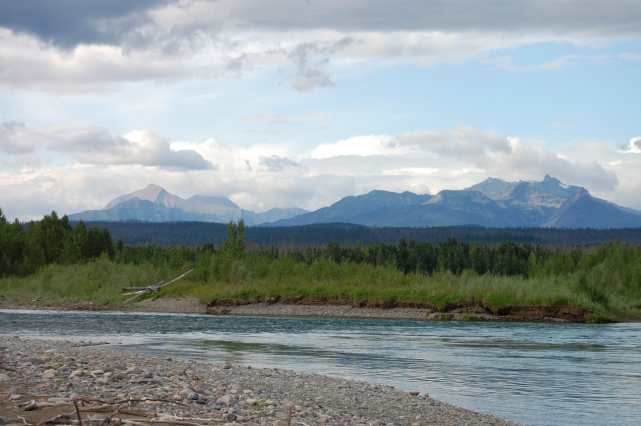 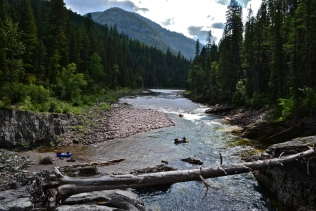 South Fork of the Flathead 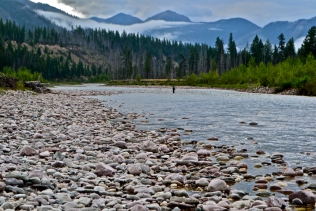 South Fork of the Flathead

1. All three Forks of the Flathead River are designated Wild, Scenic or Recreational, but the main stem, below Flathead Lake, which runs through the Flathead Indian Reservation, is not.

2. The North Fork of the Flathead, the longest of the three forks, starts in British Columbia and flows for roughly 31 miles before crossing into the U.S. The Canadian portion of the river is currently unprotected and has been threatened by coal and/or coalbed methane development in the past. In 2011, the British Columbia government decided against permitting energy development, but that portion of the river remains unprotected in any meaningful way.

3. Forty miles after its beginning high in Montana’s Bob Marshall Wilderness Area, the Hungry Horse Dam impounds the South Fork of the Flathead. The upper stretch is not accessible by road and requires hiking, horse or mule packing or a wilderness flight to access.

4. The Middle Fork of the Flathead appeared in the 1994 film “The River Wild” starring Meryl Streep and Kevin Bacon. If you haven’t seen it, it’s well worth a watch.

5. In 1943, the Army Corps of Engineers proposed a dam on the North Fork of the Flathead. Conservation luminaries like Olas Murie, National Park Service Director Stephen Drury, and stiff local opposition defeated the proposal.

1. The St. Joe River in Northern Idaho is considered the highest-elevation navigable river in the world—its mouth at Lake Coeur d’ Alene is at 2,129 feet.

2. The river was named the Saint Joseph River by Father Pierre-Jean de Smet, a Catholic priest who also established the Mission of the Sacred Heart in present-day Cataldo. That Cataldo mission is the oldest standing building in Idaho today.

3. Only the upper 66.3 miles of the St. Joe are designated Wild and Scenic, and most of the stretch runs through the Idaho Panhandle National Forest with ample camping and hiking opportunities.

4. The Upper St. Joe is renowned for its whitewater during spring run off. It also boasts a world-famous catch-and-release trout fishery.

Clarks Fork of the Yellowstone, WY (Wild & Scenic circa 1990) 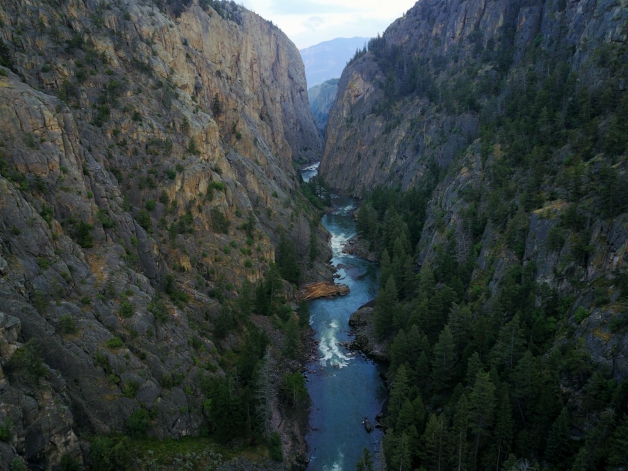 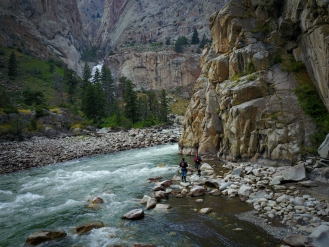 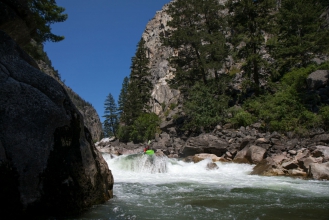 1. The Clarks Fork of the Yellowstone rises in the Absoraka-Beartooth Wilderness in Montana and runs for 150 miles, passing through Wyoming and back into Montana before its confluence with the Yellowstone River near Laurel, Montana.

2. The Clarks Fork is a tributary of the Yellowstone River and is sometimes confused with the Clark Fork River, a tributary of the Columbia River, which flows west from the Continental Divide in Montana. Both are named after William Clark.

3. Designated in 1990, the 20-mile long Wild and Scenic portion of the Clarks Fork River churns through a rugged canyon known as “The Box,” with serious whitewater. This section is located about 25 miles north of Cody, Wyoming and is a stout wilderness paddle for highly experienced paddlers only.

4. The Clarks Fork is the first river in Wyoming to receive Wild and Scenic designation.

5. The Clarks Fork Canyon, through which the Wild and Scenic portion flows, served an historic role in the history of the West when Chief Joseph led a band of more than 700 Nez Perce and 2,500 ponies out of the rugged canyon to escape U.S. Cavalry troops camped at both ends of the canyon. 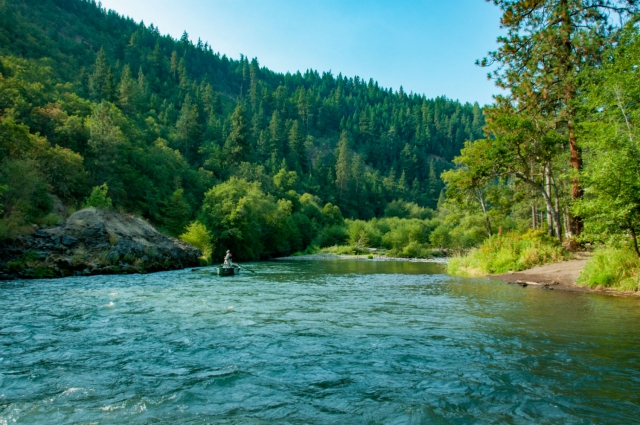 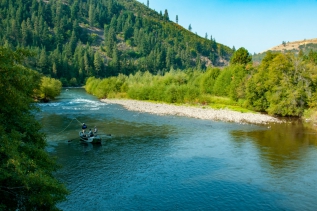 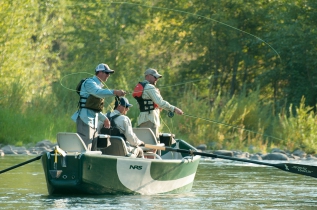 1. The Klickitat River is named for the Native American tribe that historically lived in the river’s watershed.

2. The Klickitat begins near Gilbert Peak on the Yakama Indian Reservation and drains the drier eastern Cascades before connecting with the Columbia River near the town of Lyle, Washington.

4. The Klickitat is a critical salmon fishery and hosts runs of Chinook, Coho and steelhead. Native Americans still dip net on the river as they have for millennia.

5. In addition to running through the Yakama Nation, the Klickitat also runs through the Columbia River Gorge National Scenic Area, one of only two Wild and Scenic Rivers that run through a national scenic area. The White Salmon River is the second and it runs just a few miles west of the Klickitat. 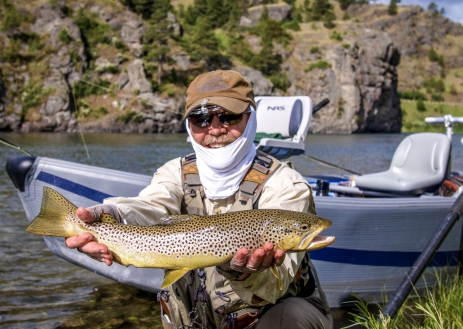 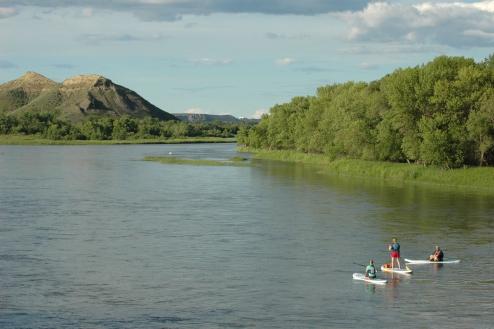 1. At more than 2,500 miles, the Missouri River is the longest river in the U.S. The Upper Missouri National Wild and Scenic River runs for about 150 miles in north-central Montana. A second designated reach runs for about 100 miles over two sections in Nebraska and South Dakota.

2. The protected stretch of the Upper Missouri River includes each of the three different Wild and Scenic designations—Wild, Scenic and Recreational. The stretch in Nebraska and South Dakota is designated Recreational.

3. Few rivers in the country rival the Missouri for history—in 1805, Lewis and Clark spent three weeks, from May 24 through June 13 exploring the segment that is now the Upper Missouri National Wild & Scenic River.

4. Forty-nine species of fish live in the Missouri River. The Upper Missouri hosts the river’s largest population of paddlefish along with the endangered pallid sturgeon and the relatively abundant shovelnose sturgeon.

5. The Upper Missouri National Wild and Scenic River runs past steep white sandstone cliffs, through beautiful canyons and remote badlands. Lewis described the White Cliffs section as “scenes of visionary enchantment.” Two centuries later, Stephen Ambrose wrote that this section is “one of the most beautiful places on earth,” in his seminal Lewis and Clark book, Undaunted Courage.