Loading my bags into the car I wonder if I’ve packed enough warm clothes. I start my journey from central Pennsylvania northeast to Vermont, bumping through potholes, tires spitting loose tarmac off the road. Suddenly I realize I did pack for the worst possible cold weather but forgot that it’s spring in the Northeast, which means we can experience four seasons in one day. So I review my mental packing list and realize I left shorts behind but doubt I’ll need those. The GPS yells at me to turn onto Interstate 88 North and off I go, podcast after podcast, until I finally arrive in Bristol, Vermont. 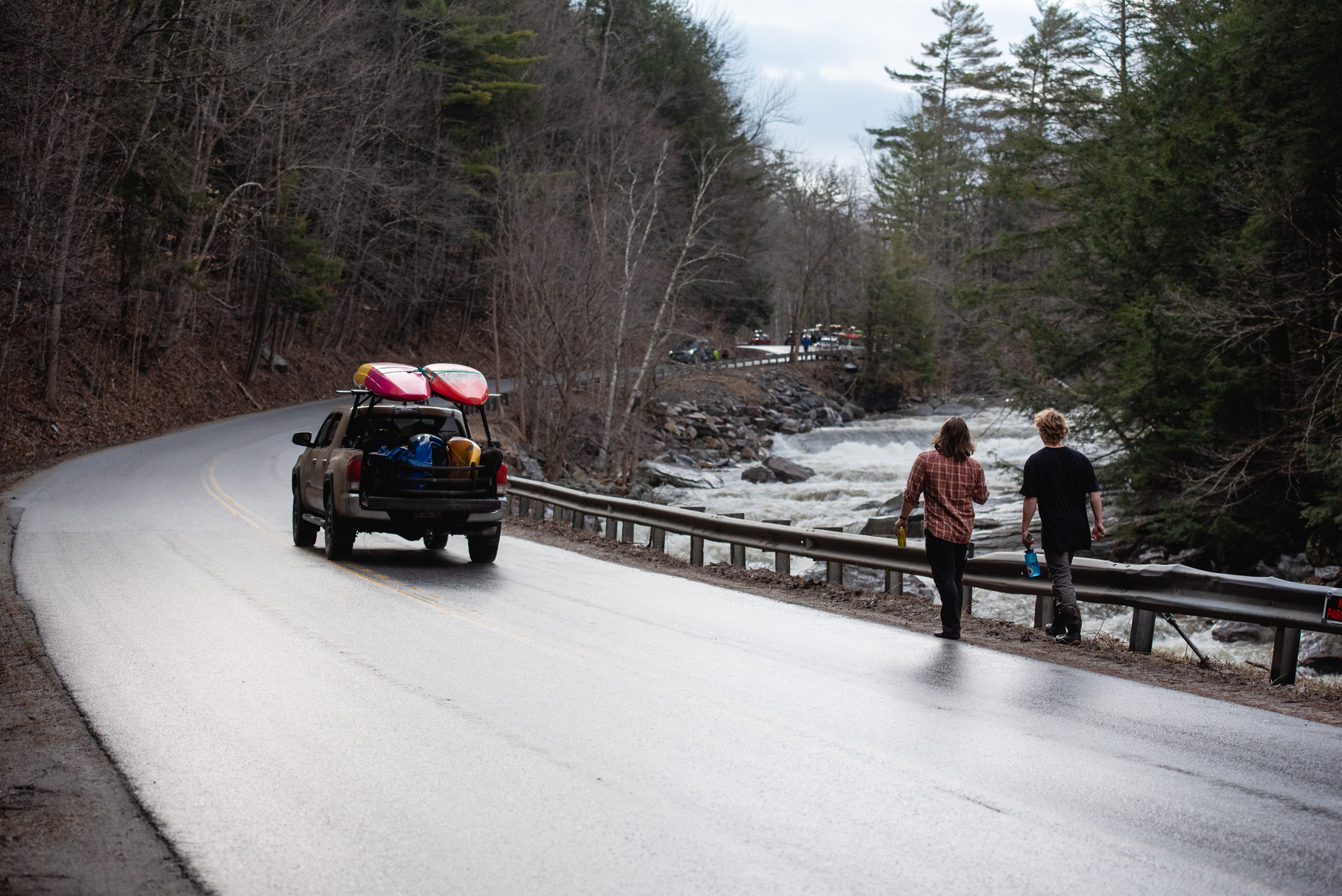 Unusually warm air floats in the car windows and I begin passing cars with brightly colored kayaks attached to their roofs. The New Haven River looks on the low side, but fun. Loud hoots echo through the forest as people run Toaster Falls, the final rapid in tomorrow’s New Haven Ledges Race. Familiar faces come into sight sporting big smiles. I haven’t seen most of these people all winter. Just as we all begin to catch up, the heavens open up and it starts to rain. I spend the evening sharing beers and a whisky or two. The morning comes too soon. It’s still raining. The drumming on the roof didn’t stop all night. I’m positive the river is up.

Surprisingly, it’s really warm outside, already hovering somewhere in the 60’s even though it’s only 8 am. Before heading to the race, I meet up with a friend in town. Bristol’s main street is quaint but offers a few options to grab some food. We head to Bristol Cliffs Cafe because the name sounds cool and rumor has it, the coffee is great, but it’s closed. Plan B takes us to Snaps Restaurant, a local favorite, we assume, considering the all-heads-turn stares we receive upon opening the door. But the killer breakfast burrito didn’t disappoint and was worth all of the entrance attention.

At the river, I grab a parking spot right by the final rapid of the race course. Cars with kayaks, people, and dogs come into view. People are high fiving, shaking hands and exchanging hugs; it’s been a couple of months since this river community has come together. I hear French accents and realize the Quebec kayakers made the trip down; they always bring a solid crew of skilled racers. I jump out of the car and start walking up to the start line and registration table. Peering into the river, my earlier assumptions are confirmed, it has risen dramatically from last night. 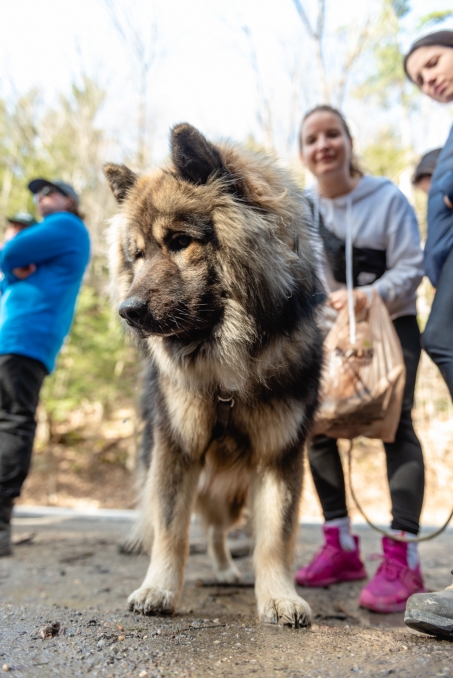 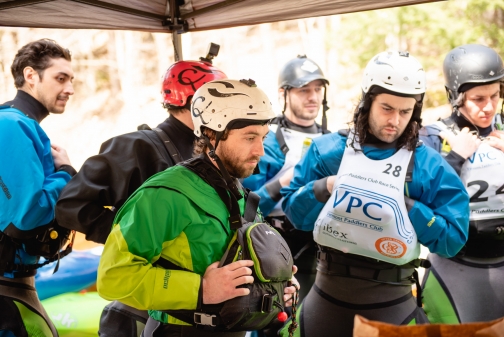 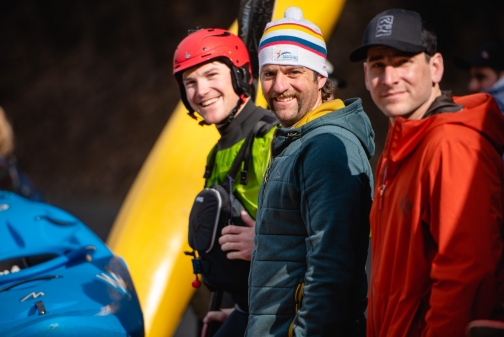 Vermont is an outdoor enthusiasts dream, maybe more famous for its incredible mountain biking and winter sports, but it also offers some of the best creek boating in the northeast. It’s not a far drive from popular dam-released northeast favorites and it’s close to the Ottawa for those warm-water days. If the New Haven is at a low flow, Middleberry Gorge, a short, technical creek calls the highly skilled boaters to test themselves in a committing gorge. The Lower Mad river is also in the zone, one of Vermont’s most commonly run creeks, a staple class II-III run for anyone learning to push their skills and confidence. And then there’s Otter Creek offering an 18-foot waterfall right in downtown Middlebury, followed by a class II-III gorge. 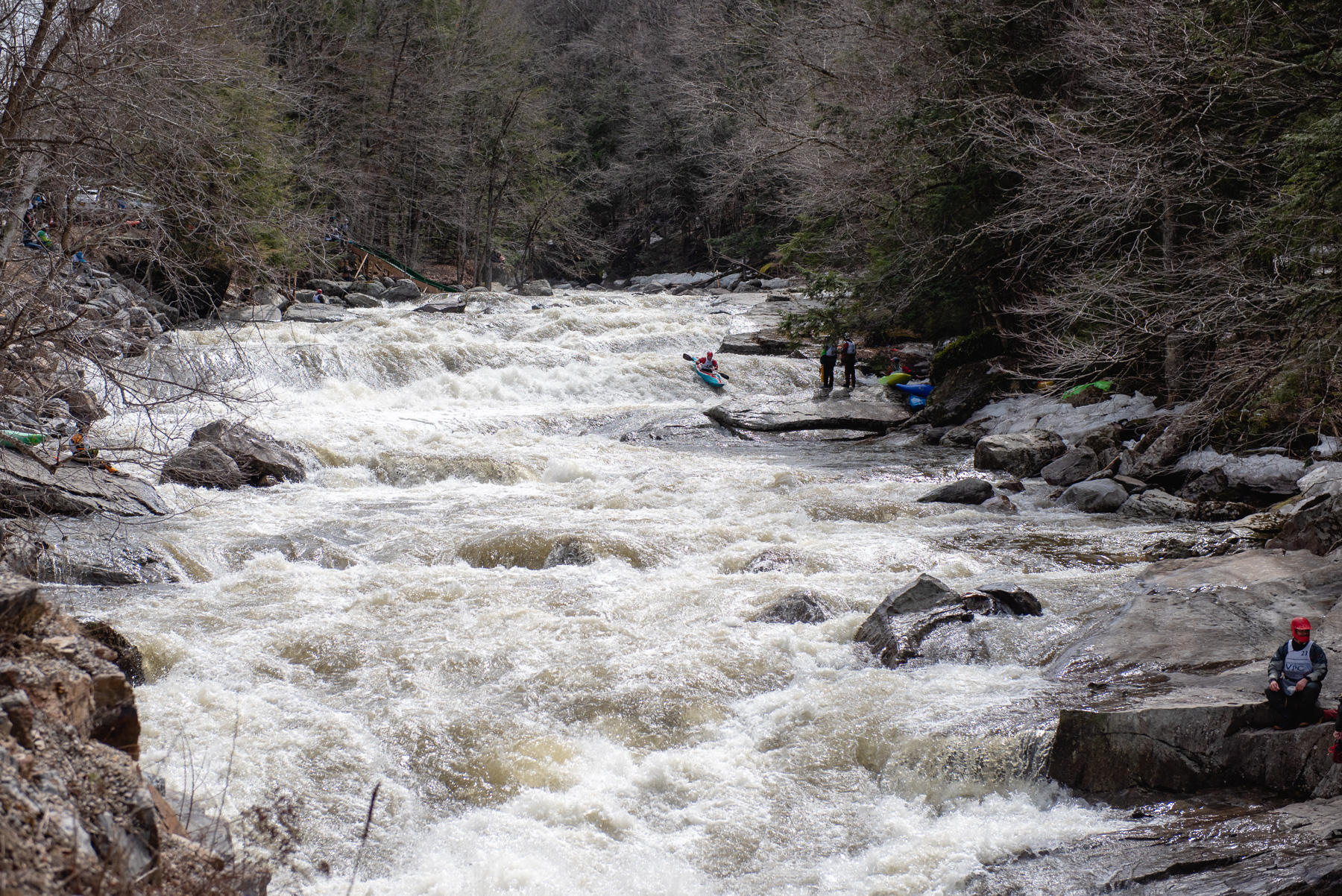 The New Haven Race was started in 2009 when Ben Guttridge (UVM student) and Dave Packie (local boater) dreamed up a race so folks could legitimize bragging rights on the fastest Ledges Lap. The first races brought in some talent and a solid local following, but then the word got out. Fast forward to 2018, and the event continues, holding true to its grassroots feel, and it never disappoints. Later I would find out that according to one of the current race organizers this year, the 11th Annual New Haven Race had the biggest turn out yet, both racers and spectators. “Our racer numbers were down from last year because the water was so high folks chickened out,” he said. “Ultimately, we sent 49 racers down the ramp vs 57 last year but we had over 200 spectators from my assessment.”

The New Haven River is a short-and-sweet, pristine mountain run. Only a mile and a quarter stretch of the river is kayaked, so boaters typically post up and run laps throughout a day or weekend. The race course is a quarter-mile long offering racers a mixed bag of challenges. It starts with a slide into the river and over the first set of ledges, then heads down continuous class III rapids. The final rapid, 15-foot Toaster Falls ends with a sprint across the pool to smash the hanging buoy. Paddlers are allowed two runs, and the best time wins. 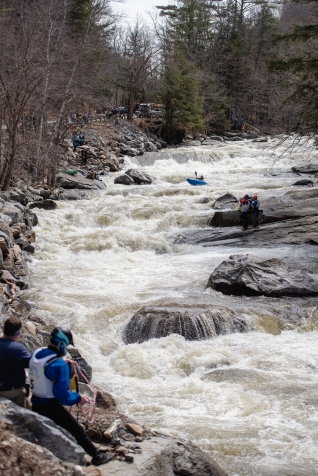 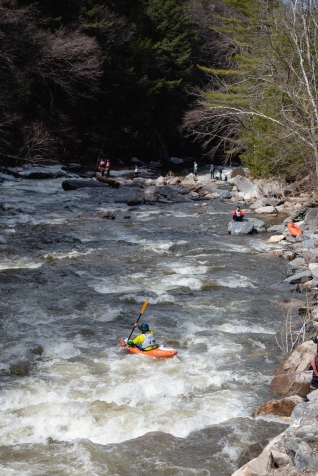 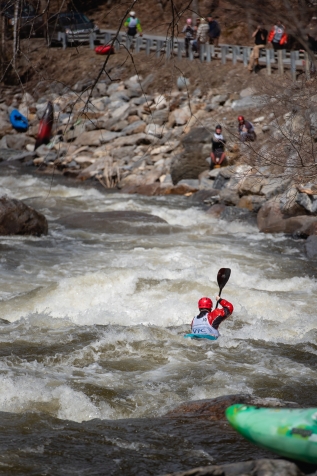 The New Haven Race is the season opener for kayak racing on the East Coast, more specifically the Northeast. Over the past few years grassroots kayak races have popped up in almost every state. The list of races is long: Maine’s Smalls to the Wall and Maine Whitewater Championship; The Emperor’s Cup in New York (which evolved after the very popular Kings Of New York race series ended); The Lehigh Classic in Pennsylvania; the Cheatfest Race in West Virginia and the Ocoee Race in Tennesee. A committed paddler could race every weekend and be in superb shape for North Carolina’s Green River Narrows Race held on the first Saturday in November. The Green Race concludes the East Coast racing season.

The races have evolved through the years and today, there seems to be a class for every kind of boater, from men and women, to long boats and creek boats, the Green Race even offers a class for hand paddlers. Then there are, of course, many beer league races held by local communities just for fun or bragging rights. Some of these are a little obscure, like the Woodhaul Race in New York, no one really knows about it, but it happens. Or so I’ve been told. 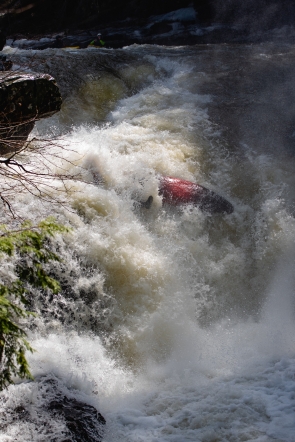 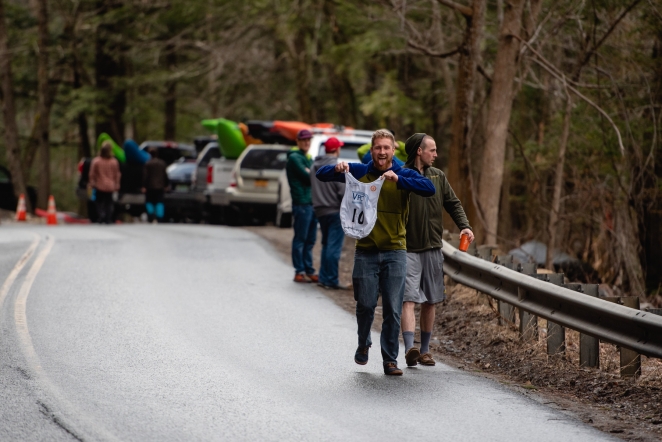 Not all of the races are as easy on the spectators, though. The Green Race requires a committed, technical hike or paddle in, for example. But the entire New Haven Racecourse is roadside, giving spectators easy-access to watch the action unfold. It feels like a grandstand on one side of the river with thick forest on the other.

Photographers and videographers work on grabbing their best shots while a drone hovers above. People shout words of encouragement as racers pull large paddle scoops of water. Big cheers roar through the crowd when a racer flips over and rolls back up. The final impressive drop, Toaster Falls, has a big spot to watch from. Like Gorilla on the Green, it’s the spectacle of the race course, drawing out Bristol locals who don’t even paddle to watch the race and see what happens on their creek. 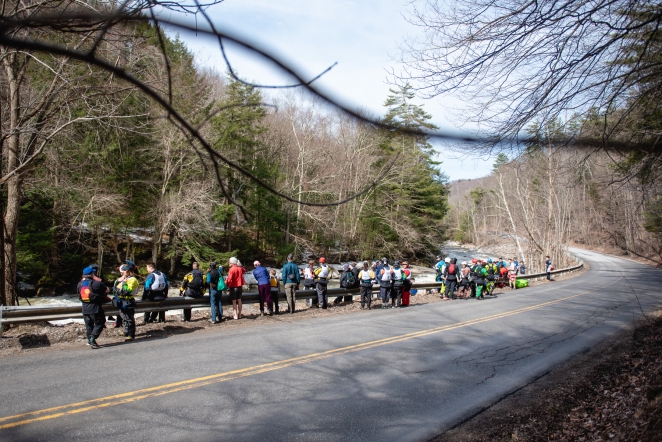 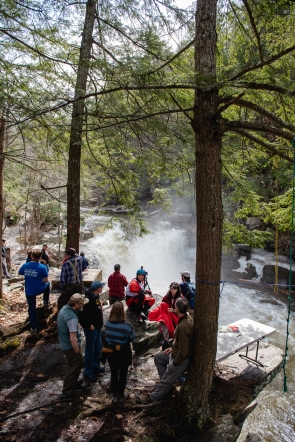 By midday, either exhausted or satisfied with their times, some paddlers opt out of their second race lap. For others, their second lap is an opportunity to go head-to-head with some of the best northeast racers in hopes of claiming the title or just a personal best. The afternoon continues to heat up, both on the river and in the atmosphere. I think back to those shorts tucked away in my closet. I’m forced to borrow a pair from a buddy and as I change into them, I never would have thought I’d be in shorts and a t-shirt, getting sunburnt in early April in Vermont.

Suddenly, cheers ring down the riverbank as a live bait rescue takes place in a sticky hole above Toaster Falls. I make my way down to the falls to snap some photos of the action. A kayaker clinging to his boat goes over the falls and sinks deep into the aerated pool below. He pops up with wide eyes like he’d been kissed by God while underwater. A number of safety kayakers pull him to shore for the medic to have a good look at him. He seems to be in good shape, just shaken up by the adrenalin-enhanced experience. 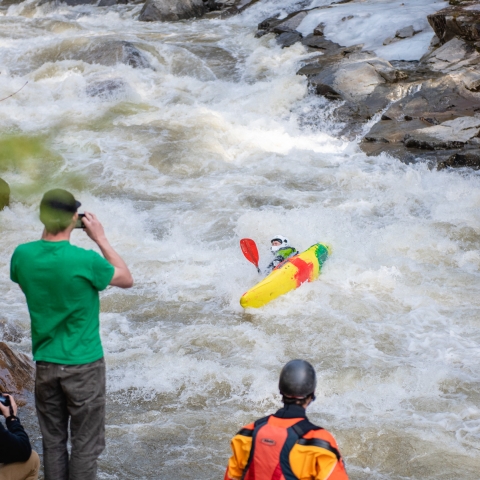 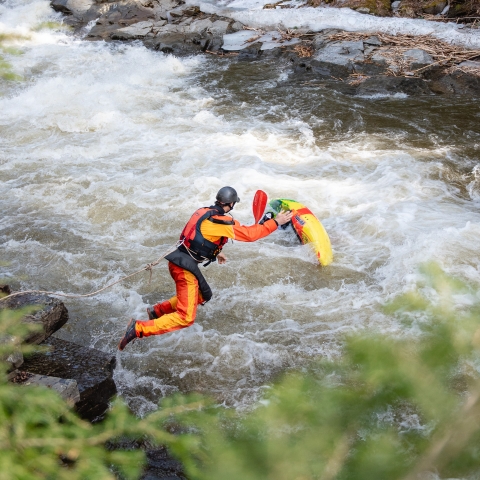 The race comes to an end and everyone makes their way up to the starting line for the laid-back awards ceremony and raffle. Garry Lee and Leanne Bernier take home First Place in the men’s and women’s event this year, which awards them the Wooden Trophies and first pick of the prizes donated by the sponsors. With higher water levels, the racers put up faster times than in years past. Fellow boaters hand out booty beers to all the beaters. The crowd volume increases as stories from the day are shared, repeated and laughed about. 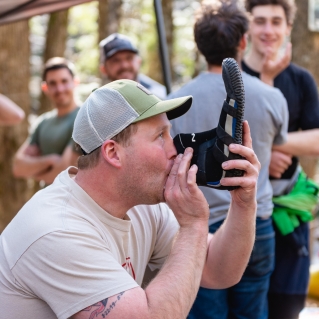 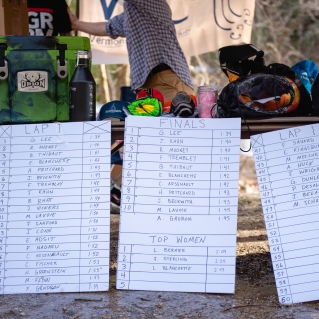 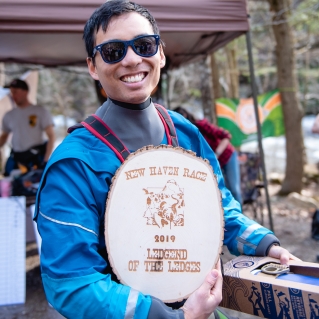 People agree that this was one of the best New Haven Races to date: warm weather, high water and solid competition. Prize giving wraps up and the after party is off to a good start, with free beer donated by Otter Creek. Some people head home and others make their way to a local paddler house to add to the beer collection. I look around at the smiling faces and battered bodies as the sun starts to disappear behind the woods, kayak race season is here and this year’s New Haven race is one for the books.