The World’s Most Beautiful Kayak Festival

I have to admit, when I first read the self-proclaiming statement describing the Arctic Sea Kayaking Race as “one of the world’s most beautiful and fun kayak festivals, “ we started thinking of all the other kayaking festivals around the globe that we had attended over the years. The most beautiful in the world? That’s a big claim.

After spending a significant amount of time paddling rivers in the Arctic, a sea kayaking festival seemed like the obvious progression in our quest to explore amazing places (and sea kayak more). Situated in Vesterålen, a region north of Lofoten in Northern Norway, the backdrop for the Arctic Sea Kayaking Race is pretty spectacular. 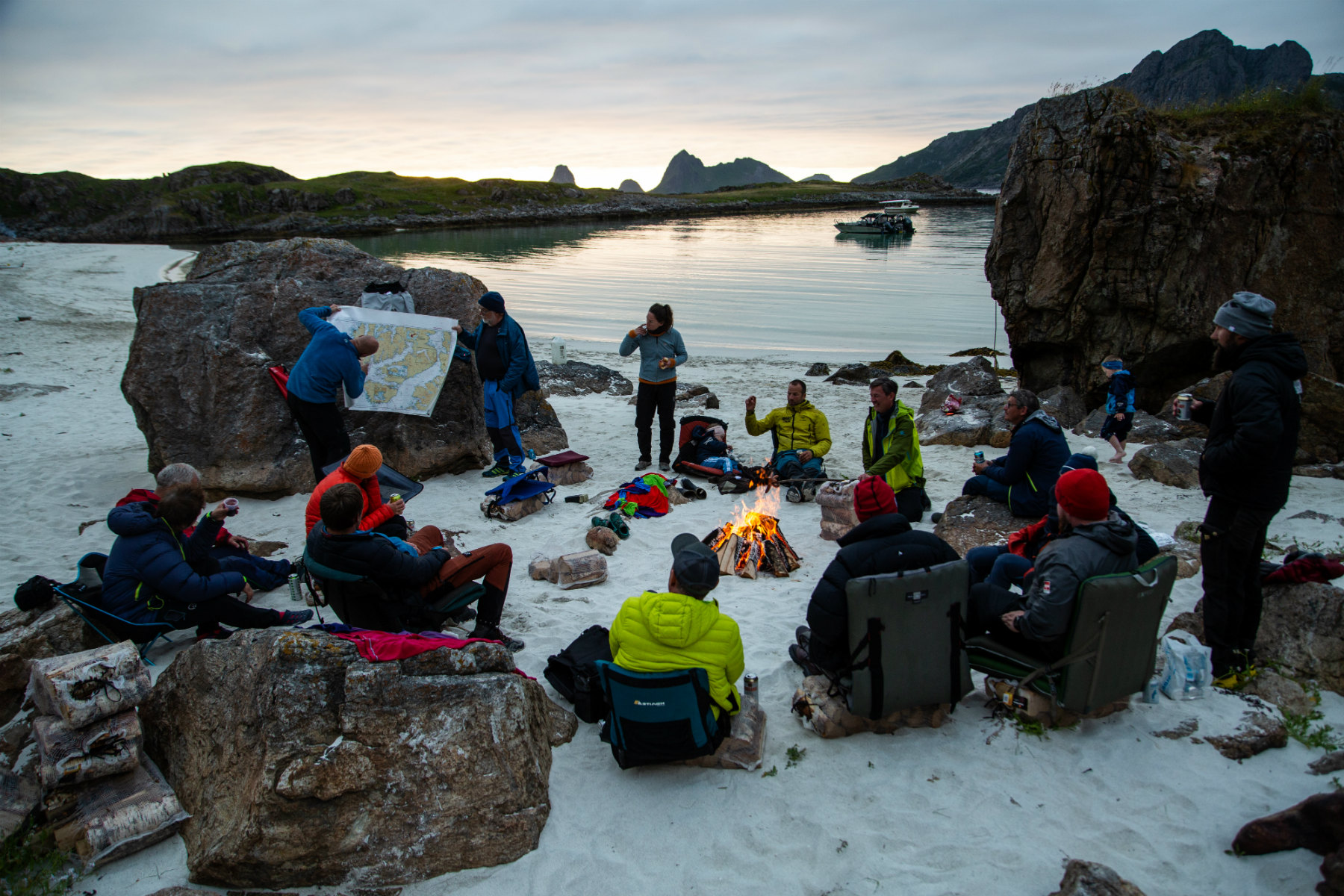 A tight-knit community of friends first started the festival in 1991 and for the last 29 years have gotten together during the summer to run a festival that welcomes ocean paddlers from all over Europe, and indeed the world, regardless of skill level. For one week, beginners who may be taking their first strokes can mingle with and learn from the top marathon racers and sea kayakers in Norway.

Based in Skipnes, a remote fishing village only accessible by boat, the festival week is split into three distinct parts: The Rambles, which are a series of longer paddles teaching multi-day and open-water skills; Skills Day, which offers technical development from experienced paddlers; and the Half-Marathon-Race Day, a social competition for everyone to get involved, at every level. In addition, kayak shops pop up tents on the pier giving participants a sneak peek into the latest kayak equipment, as well as an opportunity to ask questions and buy gear. 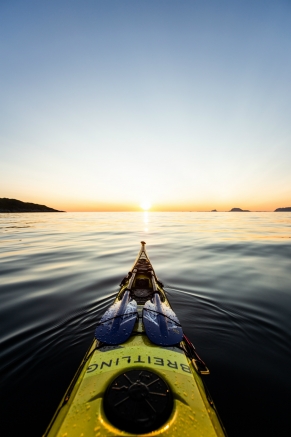 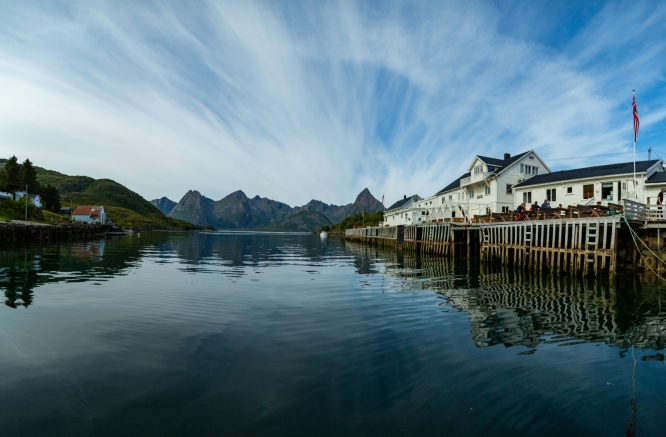 The Rambles
One of the amazing things about this festival is that if you have not done much multi-day paddling before, you have a team of people eager to help you pack your boat and share their tips for prepping for overnight adventures. And the Rambles let you put those new skills to the test.

The Rambles are divided into two groups depending on skill level and each group sets off on their own overnight or multi-day paddles. The short ramble is suitable for anyone with some paddling experience and enjoys a slower pace. The long ramble is suitable for those with more paddling experience and are able to keep a faster pace over a longer distance.

We set off on the long ramble. Coaches and rescue professionals made up our crew. Each day, our team was briefed on the paddling plan. On our first night, we landed on a beach with a grassy plateau for camping. It would be safe to say that as campsites go, this one was perfect. Our guides, Lars Oven, Eirik Bentzen and Marian Leonhardsen all grew up paddling these waters—they know them like the back of their hands. 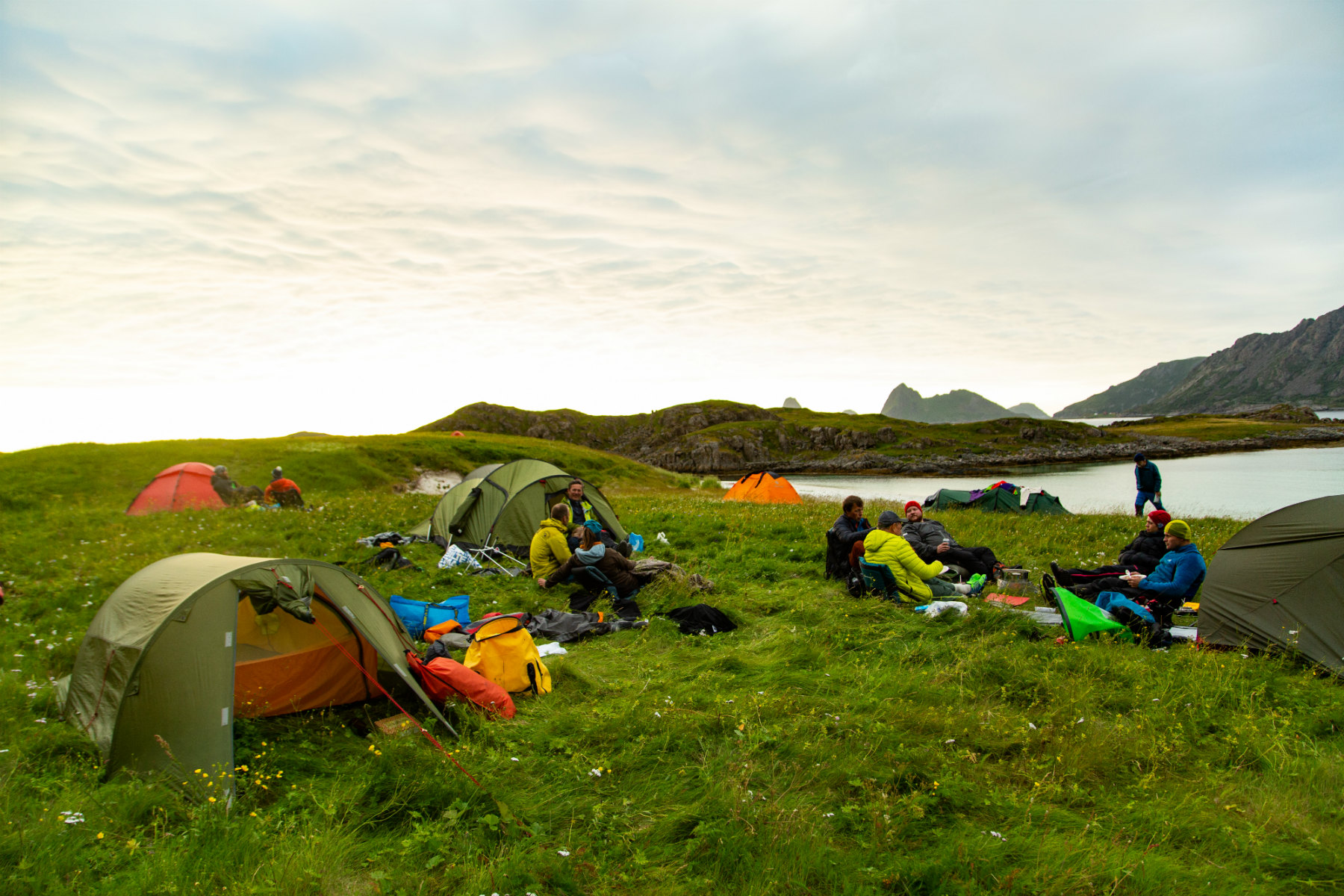 The Ramble continued past mountains towering out of the ocean and beaches stretching their white sands into its depths. At one point, we busted out the fishing equipment, securing it behind our kayaks in case the opportunity arose to throw a line. To my surprise, we managed to catch enough fish for all to have a little portion with dinner.

The most challenging trip of the festival involved a day of headwinds and swell on the outside of the islands of Vesterålen. Paddling south, the world-famous Lofoten Islands stayed in our horizon line, and despite the conditions, we would remember the picturesque white sandy beaches over the swell. 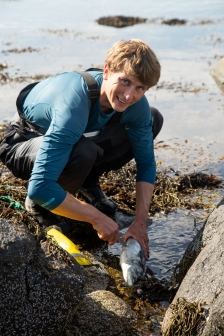 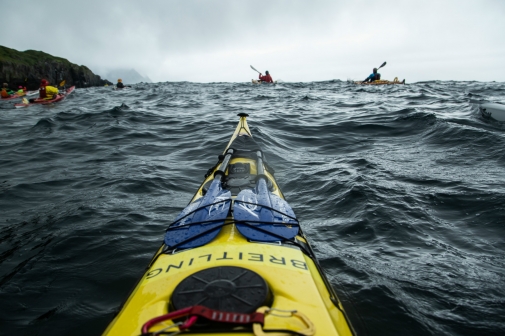 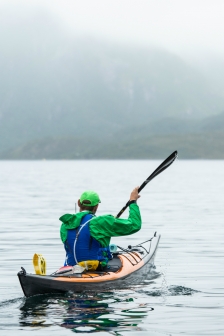 Meanwhile, the kayakers on the Short Ramble mirrored our route with the exception that they stuck to the sheltered side of the islands. Whilst the long ramble team worked on their technique in small swell and winds, the short ramble team developed their forward paddling and got used to the feel of loaded sea kayaks.

Waking up on the final morning of the ramble was not the morning we had planned. Strong onshore winds and sharp rain pierced through my base layers. I quickly donned some thicker outer layers to prepare for a splashier return trip to Skipnes.

Back at basecamp, we met with the short ramble team as well as the new paddler group being taught by Roger Tronstad. An evening of celebration ensued with paddlers from all over Europe enjoying time away from the hustle of daily life and sharing tales of paddling adventures. 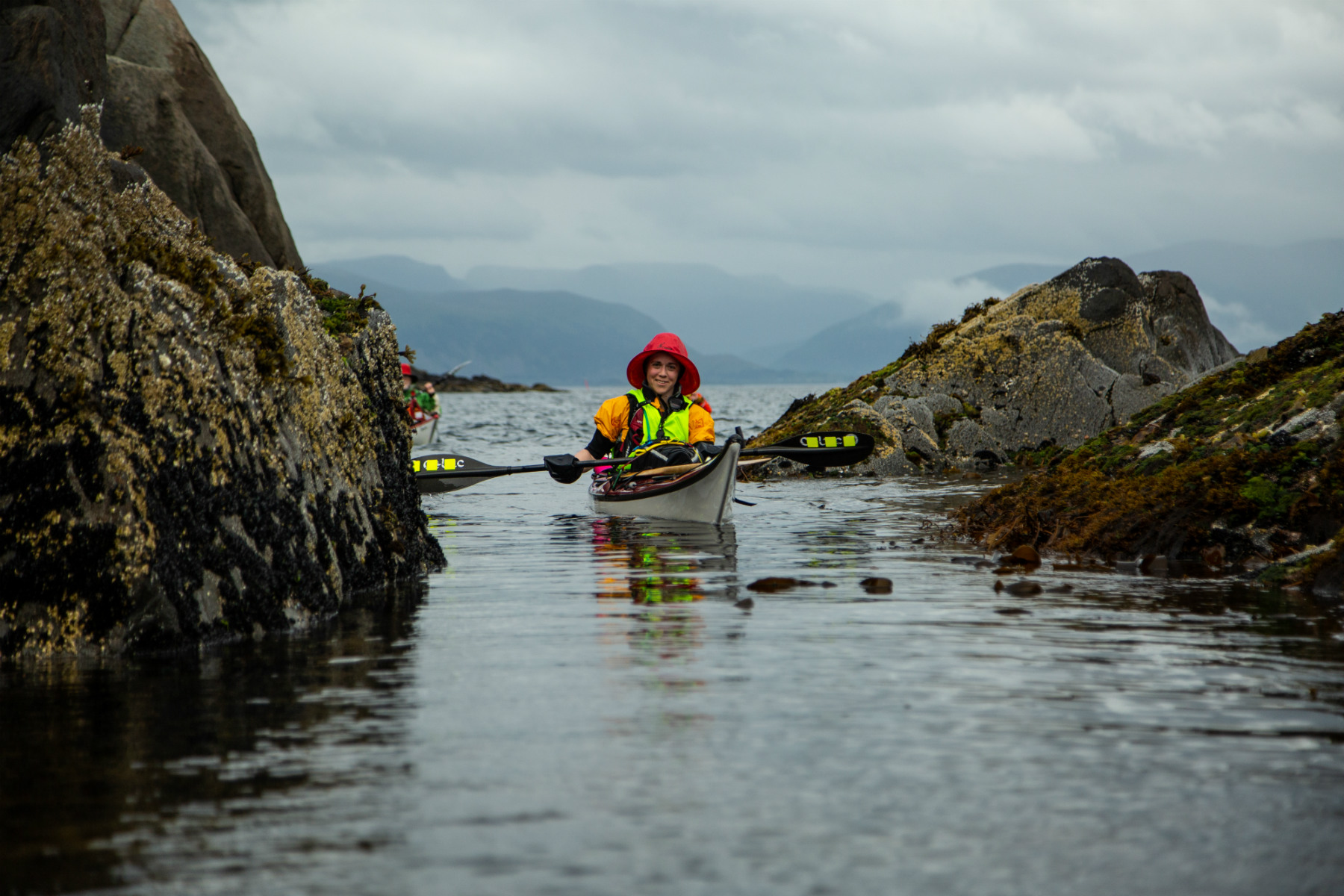 Skills Day
The ASKR has some of the most experienced paddlers and rescue personnel that Norway has to offer, so for me, the skills day was one of the highlights of the whole festival.

Eirik Bentzen, owner of Milslukern and a Norwegian Marathon Paddler, helped paddlers to perfect their forward stroke technique. Local coaches taught rolling and rescue clinics. One group paddled out to improve their rough water techniques in the small swells and test rock-hopping skills. But it was the off-water presentation that stuck with me most.

Lars, a rescue helicopter winchman, gave an in-depth talk about ocean safety and protecting yourself in case of cold-water immersion. He also discussed how to recover and increase your chances of rescue during an emergency. Paddlers packed in to hear Lars’s insight. He answered questions and explained equipment. I’m confident this single lecture could make the difference in life or death to at least one paddler in that room. I exited the talk with a giddy feeling having been a part of an event that betters the paddlesports community. 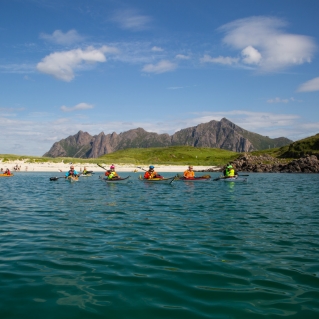 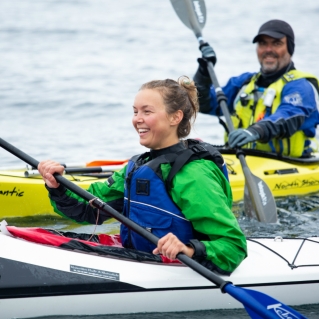 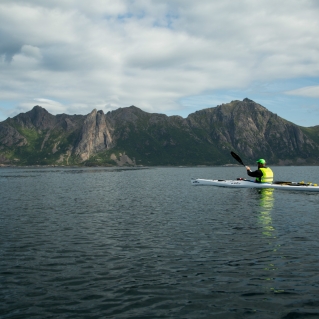 Race Day
Like all good festivals, they save the best for the last. Race Day is dedicated to a long race around the islands. Traditionally, it’s a marathon however; the 2019 route was only a half marathon. (Rumor has it, in celebration of the 30th Anniversary, next year will be a full marathon.) The race was again split into several groups, from the ultra-competitive paddlers to those who just wanted to go for another incredible paddle in Northern Norway.

The festival wrapped up with a huge feast of fresh fish and an after-party on the deck of the Skipnes village. We drank beers late into the night and toasted to the most beautiful kayaking festival in the world. 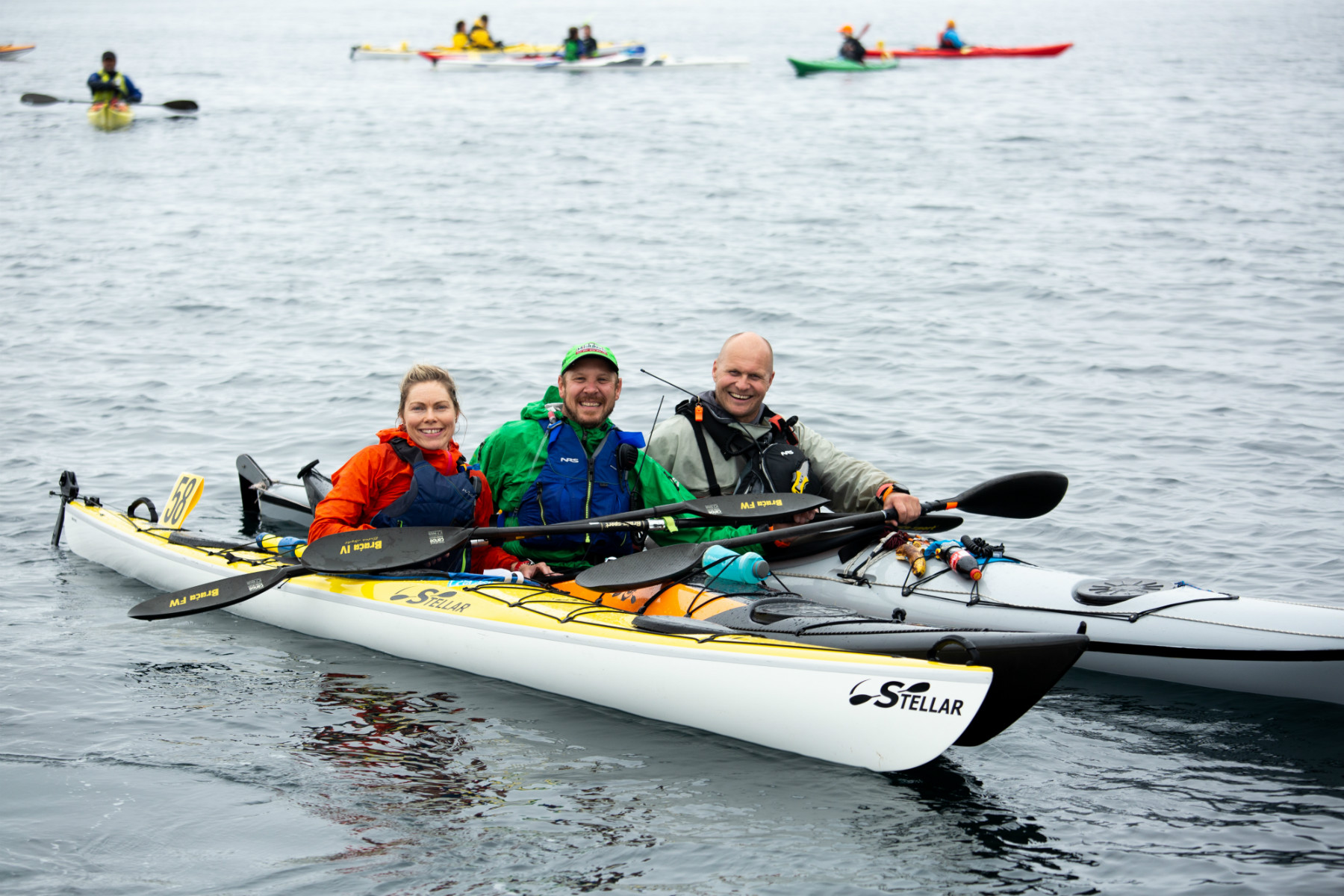 Editor’s Note: This event, like so many others, happens so seamlessly because of the dedicated local paddlers who tirelessly prepare a full schedule that inspires, educates and celebrates sea kayaking. Huge thanks need to go to Karl-Einar, Astrid Berthinussen and the rest of the ASKR crew who make this grassroots event happen. Learn more about The Arctic Sea Kayak Race and get involved.