Longtime Team NRS freestyle kayaker Devon Barker-Hicks discusses the trend toward surfing more than just kayaks on river waves and why she likes sharing the lineup with surfers, SUP boarders and catarafters.

A few days ago, while surfing my kayak at Race Creek on the Salmon River, I was stopped by two guys in a mini-van. They had the Playboaters Guide to Idaho in hand (a kayak surfing guidebook written in 2000) and surf boards in the back. They asked for recommendations for waves to surf in route to the Lochsa. They were a road trip to the famous Pipeline wave. There have been stand-up surfers riding Pipeline since I was paddling a Perception Dancer, but not many joined the lineup on the Salmon until recently. Of course, it was only a matter of time. These days, you’re as likely to see a board surfer or cataraft surfer on the salmon as someone paddling a playboat, and that’s part of a trend that extends beyond Idaho to surf waves all around the world. River surfing is fun no matter how you ride the wave. 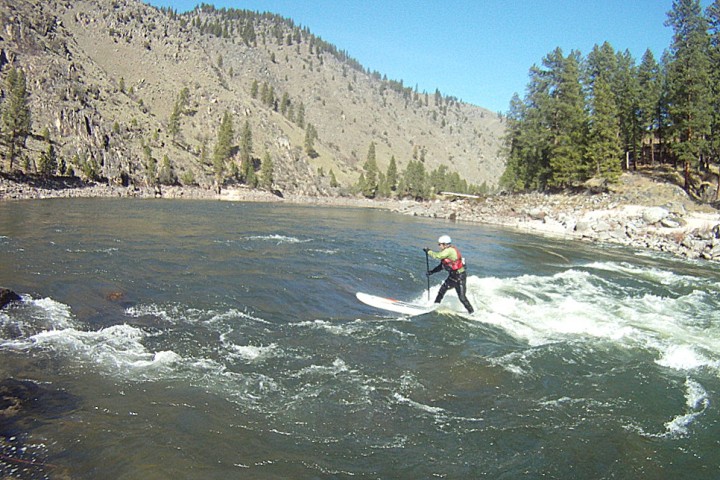 I’m so stoked to have been a small part in this shift toward more people enjoying all kinds of surfing on our rivers.  Mike and I started stand up paddling last year.  Mike has taken to it a little more than me and has been able to surf many the waves around Riggins, Idaho on his NRS Earl SUP.  Last year, I learned to surf a cataraft and found that the comfort it provides, along with the adrenaline, is really nice. One added benefit is that I can take my friends out surfing on the second seat on the cat. So, I can take beginner kayakers out for their first surf even before they know how to roll. Catarafts are now being made specifically to surf, and the demand for river surf and SUP boards is growing too. 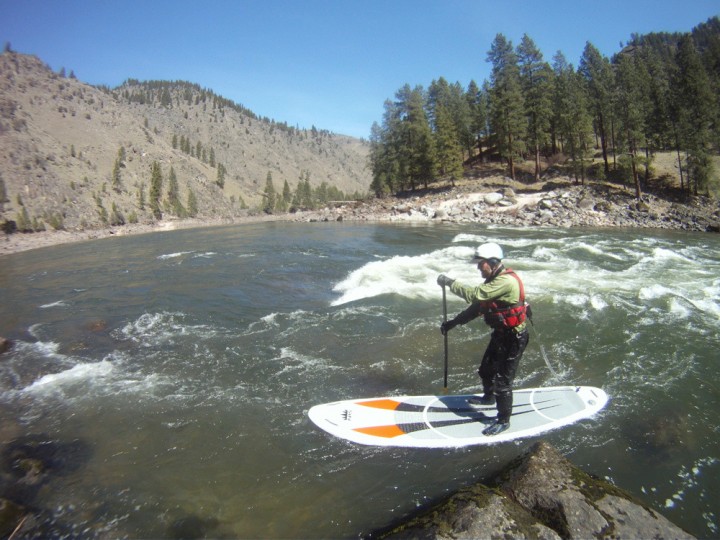 The sensation of surfing is one of the best feelings in the world, no matter what tools you use to enjoy it Some kayakers might complain about sharing waves with board surfers and cat boaters, but I think it’s important to include all user groups and make them welcome on the river.  The more people that get out there on the river, the more likely it becomes that our rivers will be protected and respected long after our surfing days are over. 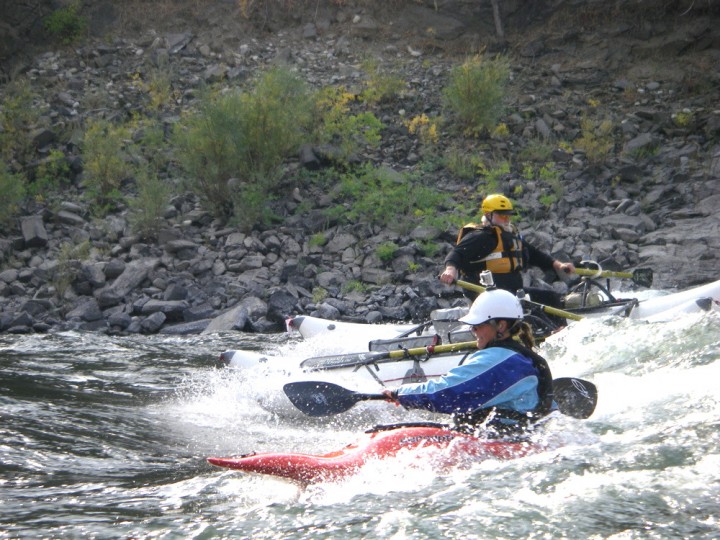 Almost all of the competitions on the freestyle rodeo circuit now include a SUP cross and or downriver event.  Many of the freestyle kayakers are also competing in these events.  Naturally, they’re bringing their boards with them to events here in the Inland Northwest.  Two events this year even have surf board events. The Pipeline Classic Surf Rally, on June 7th, allows competitors to surf the best craft they have.  About a month ago, I was surfing at Pipeline with a group of surfers shredding on 5’8” boards while I was barely able to catch the wave in my freestyle kayak. ( I’m either going to take my Perception Amp or my Murky Water’s Sword to this event.) Best in the West, happening just over the border in Missoula, Montana on June 5th will feature kayak, SUP, and surf events on Brennan’s Wave. Later in June, The Payette River Games will kick off with board surfers competing on Big Nasty in addition to many SUP events.

If you moved inland, and you are missing the surf, come visit the best inland surfing there is. Many people say, “Surf the Earth.” I say “Surf Idaho,” we are stoked to have you in the lineup!

After sharing ocean and river lineups around the world with board surfers, SUPers, catarafters, and fellow surf kayakers, I’ve picked out some waves that will work for board surfers and SUPers here in Idaho.