Mention the Ottawa River to a paddler and there are a variety of images that come to mind. Like the 2015 Freestyle World Championships where the best playboaters in the world competed on the fast and technical Garburator wave. Or maybe you envision the fur traders in birch bark canoes and loggers in plaid flannels who used this historical river as a highway in the 18th century. Perhaps your imagination takes you to spring on the Ottawa, where snowmelt from northern Ontario creates a big water, freestyle, promised land. Where kayakers dodge icebergs to surf legendary waves like Buseater and Gladiator.

But it’s likely that the most reasonable mental picture to paint is one of warm water, consistent waves and long days. Maybe this is why so many paddlers call the Ottawa home in the summer, seeking poorly-paid but adrenaline-saturated, sun-soaked work as raft and kayak guides. The best way to get to know a river or region is through the guidance of a local, so let’s cruise the farm roads and river stretches of the Ottawa Valley like the locals do. 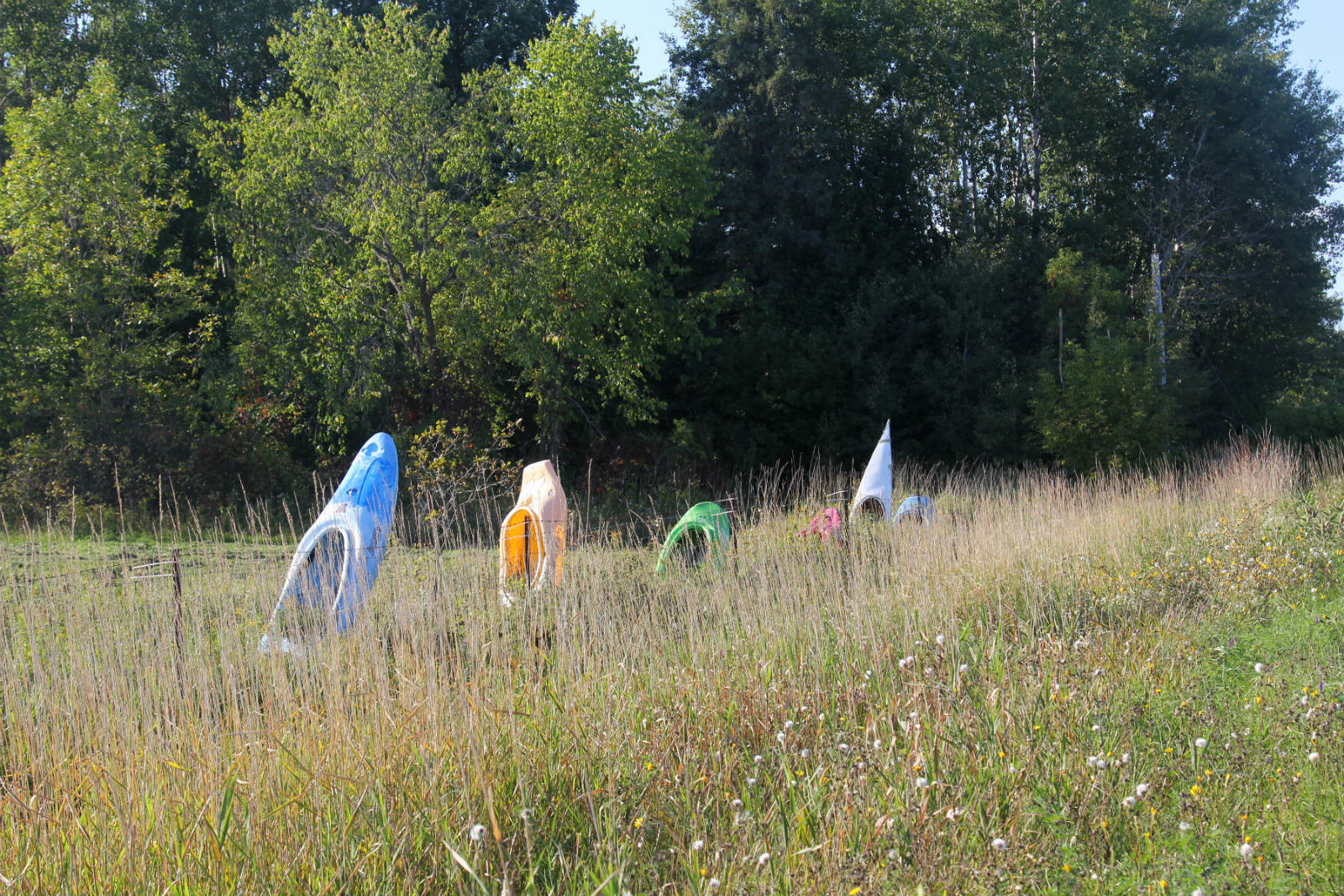 THE OTTAWA
Any raft guide worth their wage has a stack of facts and figures about the Ottawa, which they use to fill the awkward silence of flats. The name Ottawa is said to come from the Algonquin First Nation’s word adawe meaning “to trade” but has historically had many other names, including Outaouais, Kichi Sibi, or La Grande Rivière. With a drainage basin roughly the size of the state of Michigan, the Ottawa gathers volume from her source about 155 miles (250 km) north of Canada’s capital city and runs for 790 miles (1,270 km) acting as a natural boundary between the provinces of Ontario and Quebec, dropping 400m in elevation before draining into the St. Lawrence River.

During times of European settlement, the river was an epicenter of travel and economy, home to the lucrative fur trade and lumber industry. But long before industry, indigenous groups relied on the river and its tributaries. They were deeply connected through spirituality, sustenance, transportation, and culture. Since then, hydroelectric dams have been constructed along the length of the river but the mighty Ottawa can’t be tamed that easily, and when spring floods spike water levels from a hefty average daily flow of around 2,000 m3/s to almost 9,000 m3/sec like in the spring of 2017, it’s clear that this river has a mind of her own.

TO THE RIVER
Take you to the river. That’s the first thing any local paddler will do. Drop a car at the take out at River Run Rafting and while you stop at their gatehouse to pay for take-out access, walk across the road to the Green Wave farm stand and buy a snack of fresh tomatoes, snap peas and multi-colored beans. Then drive north on Grants Settlement Road for 7 km to the put-in where an outhouse sits waiting for your morning ‘ritual’ only a short walk to the river.

Water levels will dictate the rhythm and route of your lap down the Ottawa. But whether you choose the middle or main channel, McCoy’s rapid will be your first taste of this big volume river. The combination of sneak lines or meat lines will act as a test of sorts, allowing you to determine if it’s a ‘middle’ or ‘main’ kind of day. Corner wave takes a variety of forms in different water levels but is a consistent surf spot (and a local favorite) for most of the summer. Low water levels may give you Babyface, a friendly play wave below the river-wide Horseshoe hole. 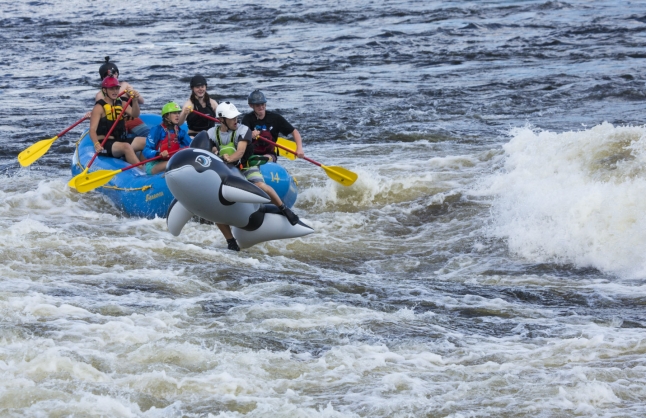 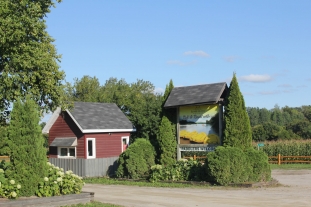 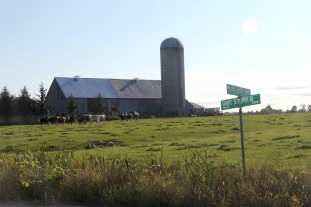 THE MIDDLE CHANNEL | Class III to IV
Scenic and playful, the Middle Channel is like a less extreme little sister to Ottawa’s mighty Main Channel. A run down the Middle offers many friendly and forgiving waves and whether you paddle a creek boat, playboat or open boat, there are surf features for all experience levels. Each rapid can be scouted or portaged, but the pool-drop nature of this channel makes it an ideal classroom for those wishing to polish basic whitewater skills like combat rolls and ferrying. Keep an eye (and ear) out for the impressive Garvin’s Chutes. Take out on the left if you aren’t up for the class IV+ Elevator Shaft, Dragon’s Tongue, S-T Chute or Staircase, four stout lines, and take in the grandeur of this impressive cascade from shore.

THE MAIN CHANNEL | Class IV
Up for the challenge? Run the big water that the Ottawa is famous for by taking two right turns to head down the Main Channel. Home to features like Garburator, Push Button, and rapids like Norman’s and Coliseum, this is big water at its finest.

Either channel you choose will bring you to the same take out at River Run Rafting, and will leave you reliving waves you surfed, thinking about the play spot you want to spend more time at tomorrow.

EAT + DRINK
Once the boats are tied down food becomes top priority. Enjoy the view of farm fields as you drive the 15 minutes to Cobden for food made with local ingredients and beer brewed on location at Whitewater Brewery. Started up by a group of raft guides, it’s a place to gather at the end of a day on the water. Grab a frosty pint of their paddler-specific beers like the Class IV IPA or the Whistling Paddler. Stick around in the evening for live music by local artists.

REST YOUR HEAD
Tent, cabin or cottage, there are accommodations of all varieties in various proximities to the water’s edge. Pitch a tent or park a trailer at River Run for the best stars, best take out, big fire pits and great swimming beach. Or rent a cabin that sleeps up to six at OWL Rafting or the whole log cottage for 12 people at Wilderness Tours. Wherever you choose to lay your head, be sure to bring bug spray and long pants. And watch out for the poison ivy! 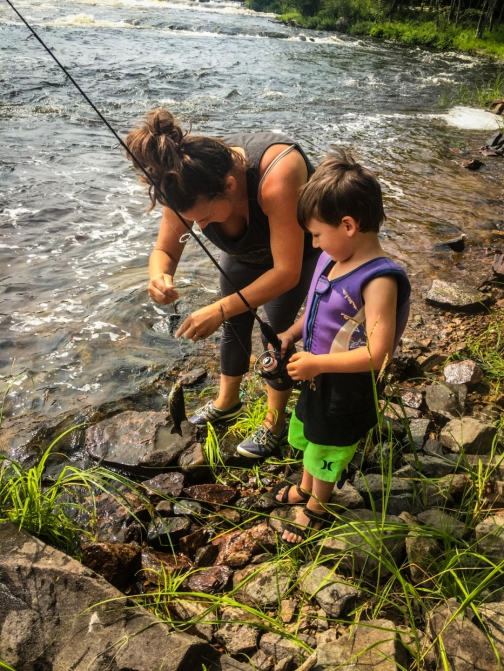 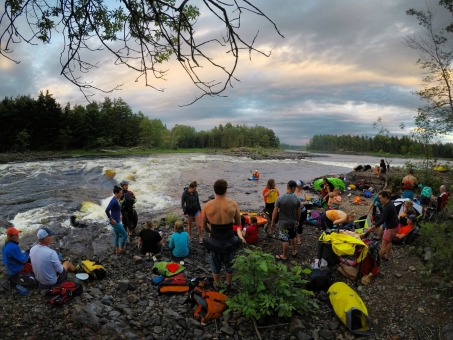 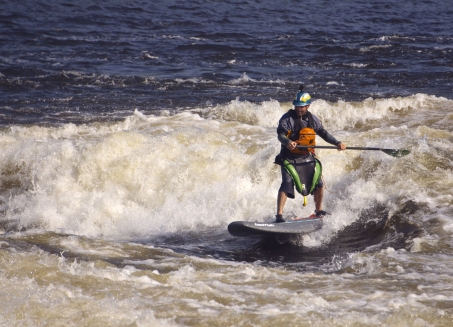 EXTRACURRICULAR ACTIVITIES
After a few days on the water, give your arms a rest and hit the bike trails that run riverside along the Main Channel. The BORCA (Beachburg Off Road Cycling Association) volunteer trail builders have a knack for making the best of the terrain and have created high-quality cross-country bike trails all over the valley, using the gradient to create flowy tracks unexpected in this part of Ontario.

Once you have worked up an appetite, drive for 30 minutes into Pembroke, the largest nearby town, where you can hit the Beer Store to restock liquid supplies and get a decadent plate of crepes at The Nook Creperie, a French-inspired restaurant downtown Pembroke, perfect for the more sophisticated pallets. If calories are the priority, go across the street for all-you-can-eat Sumo Sushi, for some rolls and hot dishes of surprisingly good quality given their proximity to the sea.

If biking isn’t your thing, take a 40-minute drive to the Bonnechere Caves in nearby Eganville and check out the prehistoric fossils via a guided or self-guided tour. On your way back to the river, taste the local favorite, poutine, at the Cobden’s Chip Pit located in front of the only set of lights in town! 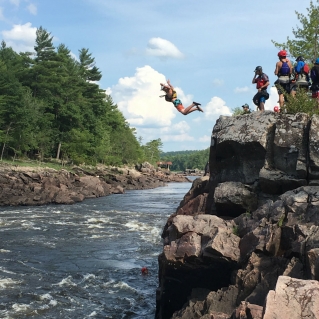 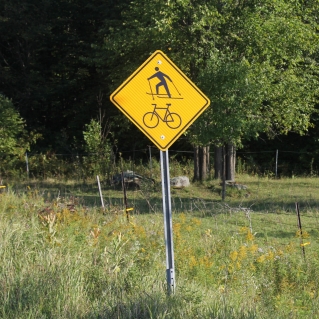 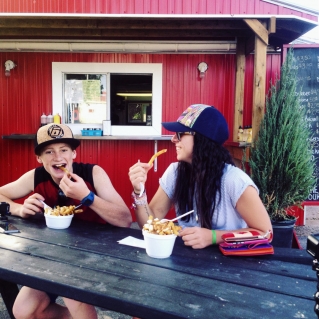 NEARBY RIVERS + RUNS
Depending on the season and the water levels, there are lots of nearby rivers to try. Quebec’s Rouge River offers a collection of drops called the Seven Sisters and the Gatineau River is home to High Tension, a coveted mini-run surf wave. Or try the Petawawa River, home to the spring rafting race Hell or Highwater, an event that helped save this river from aggressive hydroelectric power schemes in the early 2000s.

As your kayak-stacked car passes a tractor on the road to the put in, don’t forget to wave. This friendly and genuine local language is the essence of the Ottawa. Dusty farm fields and a wet river contrast each other, just like the mellow beginner rapids with the technical class IV ones. Whether it’s for a weekend, a week or the whole summer, there is something for everyone and enough of it, even the locals don’t get bored.