Lessons from a Backyard Float on the Susquehanna River

It was meant to be a big adventure, the type you pack up every ounce of camping equipment you own, hit the road and drive for a solid ten to twelve hours. You leave the house and navigate through cities, before starting to see more trees and poorly maintained roads. Those dusty grey roads with tire-sized potholes from the harsh winters. I had high hopes of taking my wife, Ashley, and dog, Che and returning to the West Branch of the Penobscot in Maine this year. Guess what shattered those hopes…

I had the perfect campsite picked out. We would watch the sunset while fishing for trout. Twenty-twenty had other plans for us all and my great summer adventure. Instead, I needed to retract my imagination back from the faraway space of vacationland and focus on something closer to home. After browsing the internet for a while, I stumbled upon a 2017 map of the Susquehanna River. It offered some very descriptive information about the area and river access. And get this, the Susquehanna River is one mile from my house.

I dug a little deeper and found take-outs and put-ins I didn’t know existed. Doing my best to be respectful to the restrictions of COVID, I came up with an alternative to the Penobscot. I walked into the kitchen and announced to Ashley, “We are going to float the Susquehanna River for our summer river trip this year!” She didn’t seem super impressed, but I could see there was a bit of a smile on her face. She knew I was serious! I’ve dragged her onto some rivers most people dream about. With a healthy dose of enthusiasm, I mapped out our route and devised a plan. Having a flexible mindset on the expectations I had for the trip made it feel like we could still achieve a summer float trip. 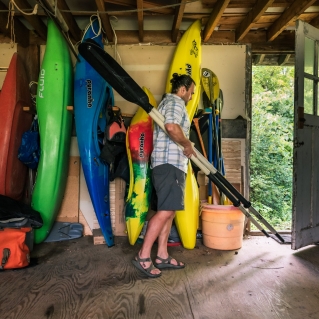 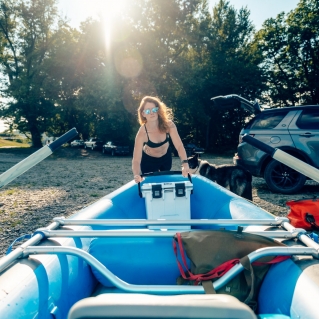 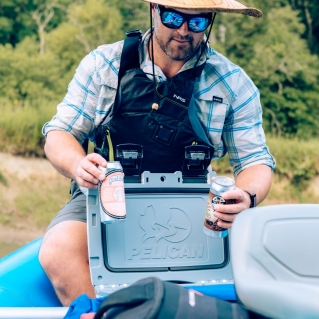 We were going to camp on one of the many big islands on the river. I dug out our camping stove, tent, NRS River Beds, and dusted off the raft as our launch date approached. I checked the weather, it didn’t look good: late afternoon storms bringing thunder and lightning along with heavy downpours for a few hours. The rest of the week looked like it was going to storm every day.

We are no strangers to foul weather camping, but this wasn’t that type of trip. As I have aged, my tolerance for camping in the rain has declined, there is no one who will convince me otherwise. So we waited for a good window to do the trip, two weeks passed. I was getting annoyed. Ashley’s work schedule conflicted with good weather patterns. Finally, there was a gap for us to launch. It was a day earlier than we anticipated so we had to scramble a bit to pull it off. 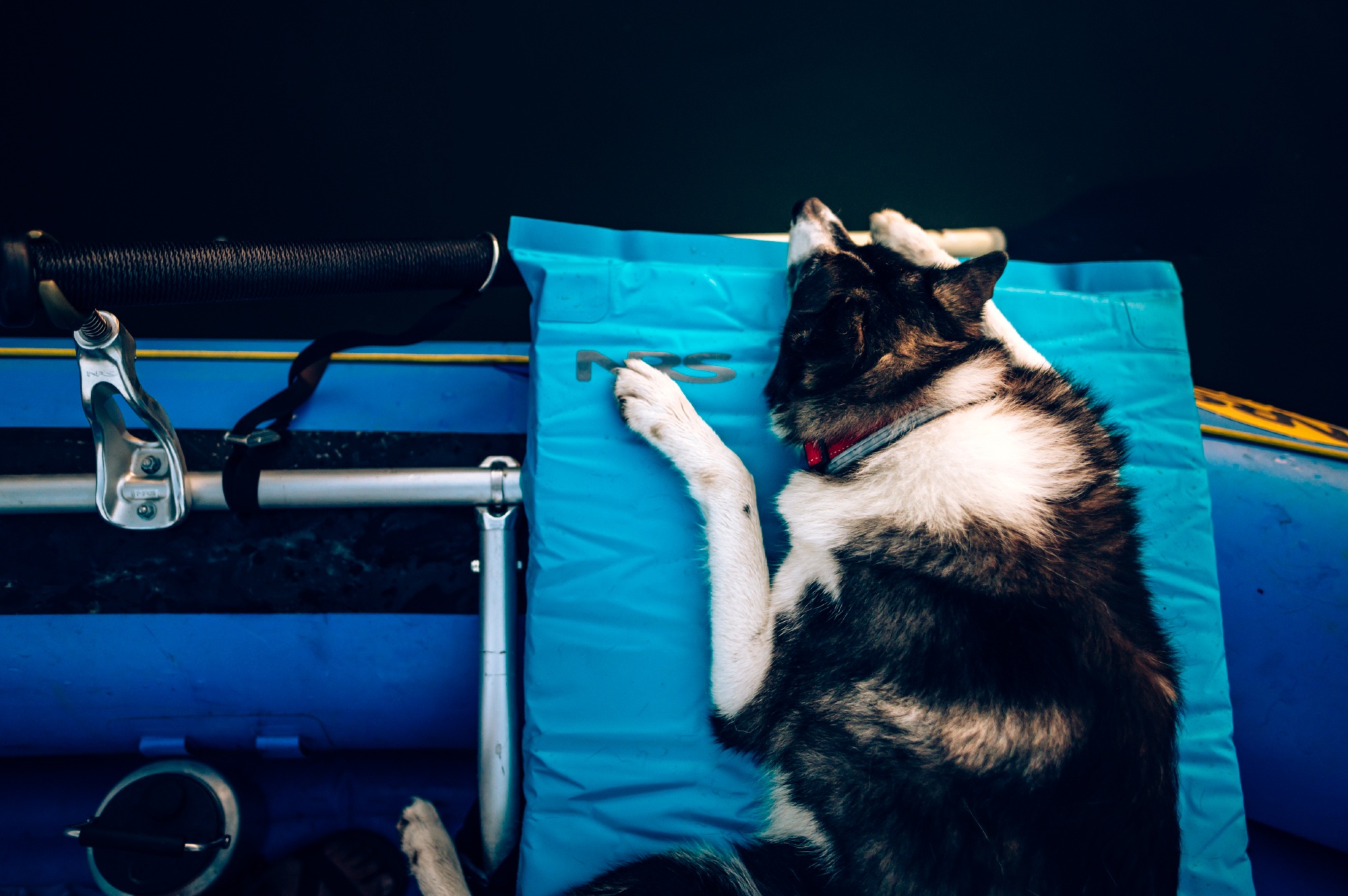 We ended up making a few game-time decisions prior to leaving:

1. We were going to bring Che as no one could watch him for the night. Che is not the easiest camping dog. He once tore an expensive hole through a tent trying to get out. He also chases wildlife like it’s his job (which it is). A 3 am raccoon fight would kill the mood. So, with our home only ten minutes from the take-out, we decided to ‘camp’ at home and put on as early as possible the next morning.

2. We would run our own shuttle.

3. We should keep the food simple. I spent years working as a raft guide cooking for clients over an open fire and I tend to get carried away when it comes to river trip cooking. You know, garlic-studded leg of lamb cooked over coals? Sure! Charcuterie board? No problem! I reminded myself there are two of us eating, not 25. So simple tacos plus some tasty craft beer from a local brewery will most certainly do. 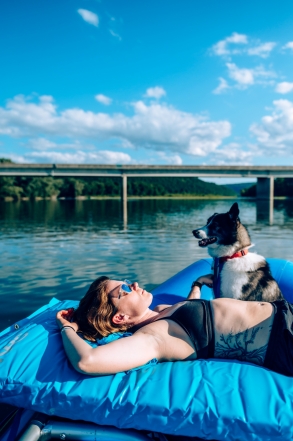 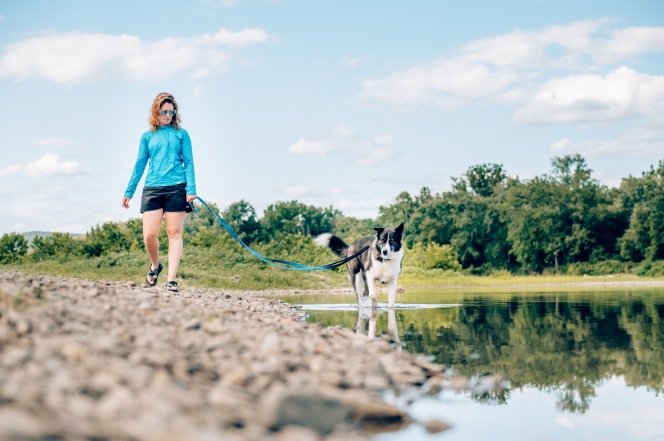 We pushed off from the put-in gravel, packed and ready for our backyard float. I noticed that familiar giddy feeling in my stomach—a mix of relief and excitement. Che found a spot at the bow, his Malamute instincts ensuring we’re safe and together as a pack. Ashley laid down in the warm afternoon sun. The sun was sitting low in the sky, a few clouds watched us as we drifted down the shallow river. I pulled out my fishing rod. Che immediately jumped over Ashley trying to catch the lure. I forgot what a pain he is to fish with. There we were in a 14-foot raft drifting downstream and he had crazy eyes forming an imaginary dotted line to the lure full of hooks.

The river splits into channels as it snakes to the Atlantic ocean. We entered a channel and found a huge log pile the river deposited at high water. As we maneuvered the raft around it and down through the overhanging trees, two juvenile bald eagles took flight in front of us. All three of us stopped and stared with delight. The bald eagle population has been making a steady come back after the local conservation department reintroduced a pair of them years ago. I figure the fishing must be good if they were lurking. I cast the line. Che started howling. I caught nothing. 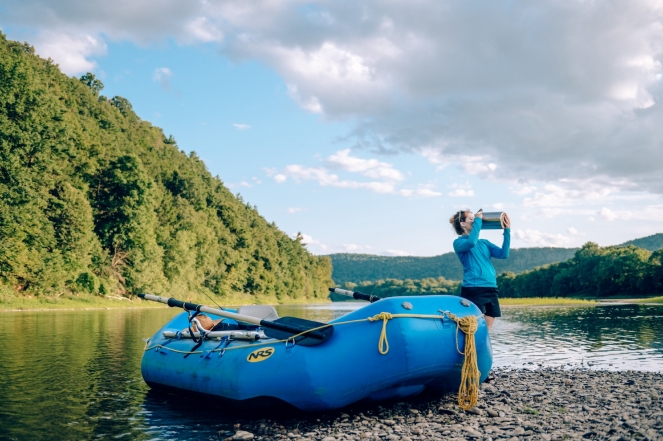 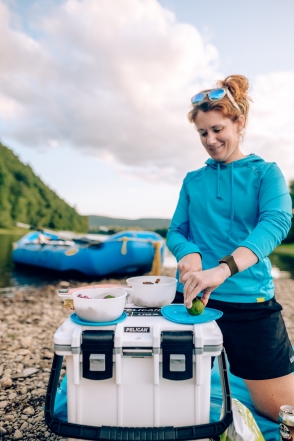 Not long after, we found a pebble beach for dinner on one of the islands. Che jumped out and went hunting in the tall grass. Even though we had only descended about one mile, it felt like we had been floating for hours. I’m always amazed at how time tends to warp on the river. Ashley and I sat by the edge of the river and enjoyed our dinner while talking of the year (in all it’s chaos), work ideas, and plans for trips once we can travel again. We made also made a pact to float this section of the river more often. It’s so close to home and so easy to set shuttle.

We wrapped up dinner and jumped back into the current as the sun dipped behind the rolling hills. Che found a comfy spot close to my feet and we enjoyed the changing pastel colors reflect off the water as the darkness of the night set in. We got to the take out after dark, loaded the boat and gear and drove the eight minutes home. Seemingly strange to be going home and sleeping in our own bed while on a ‘multiday’ river trip, I told my ego to shut it! Be present. Enjoy the trip for what it is and not what it is not. 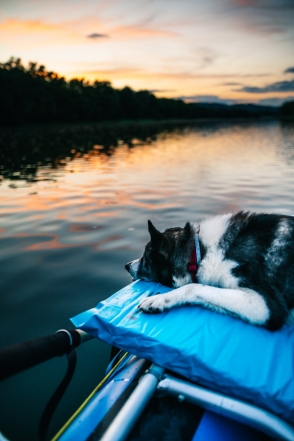 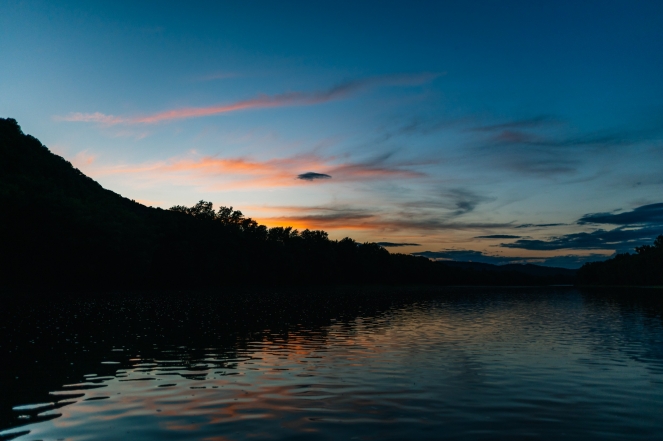 The next morning we woke up in the dark and got moving. I had found a farther take out that included a new section of river we had not paddled. It was exciting to think that we would see something new, even though it was only a mile-and-a-half. The morning was foggy and cool. It had been weeks since I put on a thermal base layer and a jacket. Our plan was to grab breakfast sandwiches and make coffee on the river. The shuttle was set and we launched the big blue boat once again. Once in the slow current, I pulled out the stove and got the water boiling. We enjoyed coffee and breakfast sandwiches surrounded by birds fishing in the mist as the sun rose. The dense fog made it feel like we were totally alone. We could have been anywhere.

The fog burned off to reveal blue skies and sun reflecting onto our faces. We replaced the jackets and base layers with sun shirts and wide-brimmed hats. We were now floating through Towanda, a small town that used to thrive back in the hay day of Pennsylvania’s coal and lumber trade. It’s still a pretty little town but oddly planned. For instance, a three-story parking garage was recently built right next to the river. It could have been a lovely space for people to sit and enjoy the scene, maybe a farmers market and food truck venue. 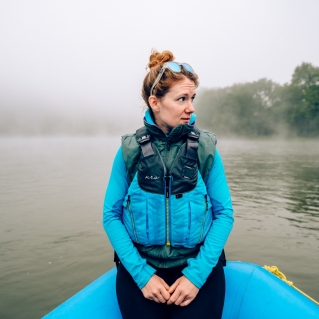 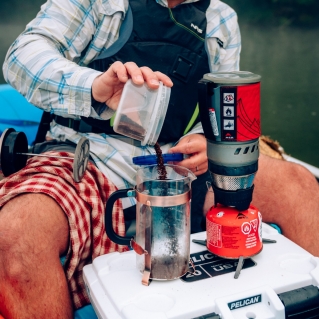 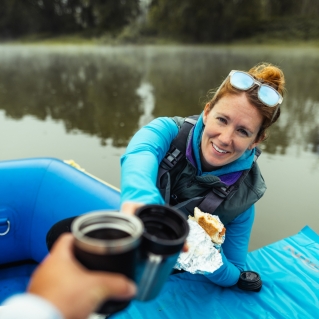 We had one major rapid approaching—a solid class 1. I stepped aside and told Ashley to take over the oars. I was going to fish if Che allowed. I’ve been highly impressed with her attitude following me down rivers over the twelve years we have known each other. She didn’t grow up a river person, but when she married me she was grandfathered into the cult. She’s joined me in Norway, where we spent a few days rafting the Sjoa River. Then she enthusiastically descended the mighty Zambezi River and spent many days and nights helping out guides on the Orange River back in South Africa. She knows the basics of navigating a rapid.

With a few adjustments here and there she captained the raft through her first rapid ever. I let out a big, “YEWWW!” She turned and gave me a big grin. “Next stop: The Colorado River,” I said. “Only if it’s warm!” she replied. Years ago I kayaked the colorado in January, Ashley declined the invite and went to Costa Rica on a surf trip instead. Now that we had passed through our major rapid we were in new territory, the river became wider and slowed. The heat of the day set in and Che started panting, so we moved to shore for a short break in the shade. 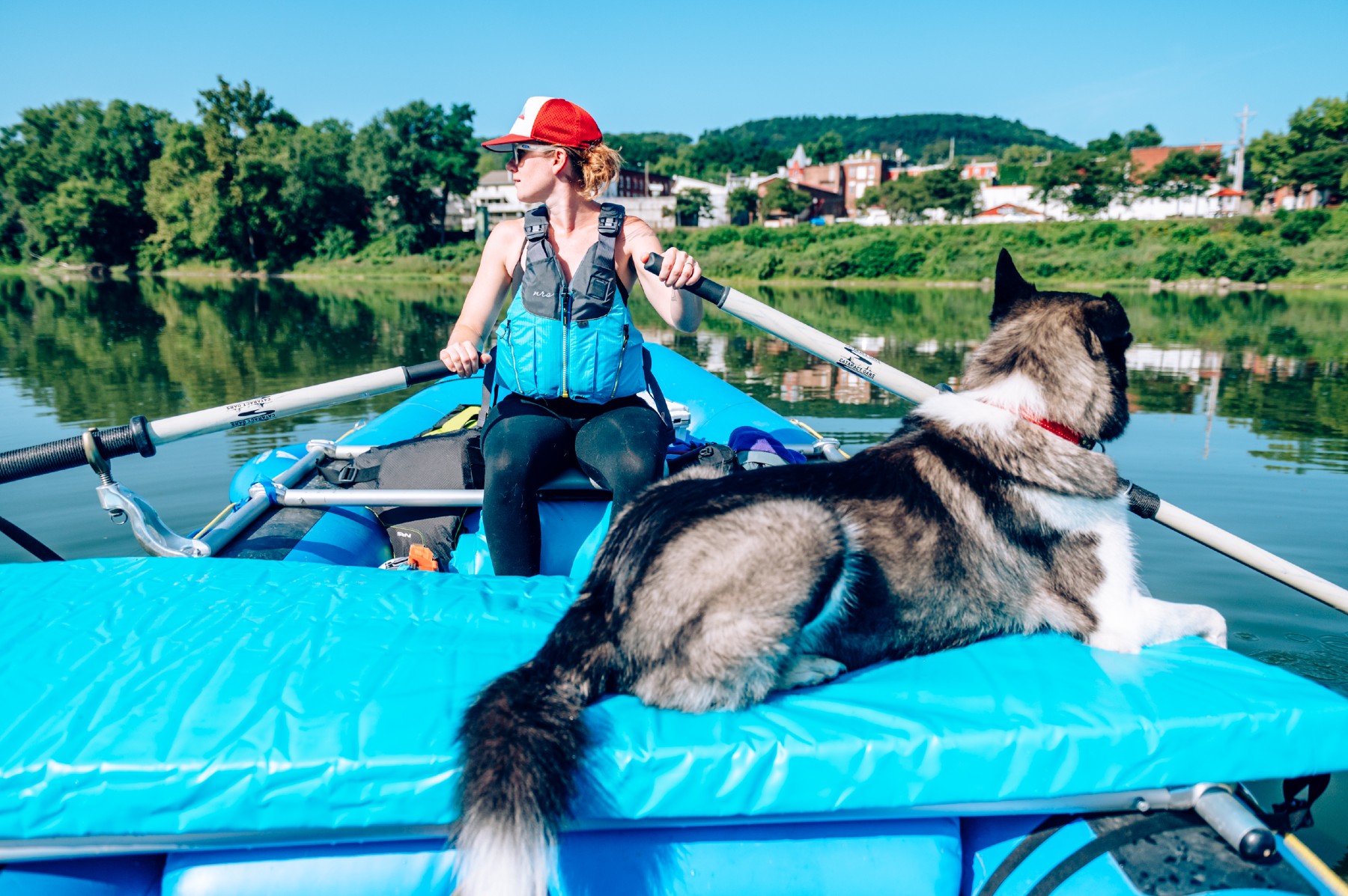 People were having lunch at the riverside park when we reached the take-out, and they looked at us like we had arrived from another planet. I don’t think they had ever seen a raft on this river, only motorized fishing boats.

And then, something I hadn’t expected happened, I felt sad our trip was over. Even though we needed to be flexible and simplify the trip to accommodate our changing plans, it really felt like we had finished a multi-day trip. Basic logistics allowed us to be present with each other and celebrate the small things, like Ashley paddling her first rapid in a raft and watching the sunrise. We made our way home where we unpacked the truck and started cleaning the equipment while planning the next backyard rafting adventure. 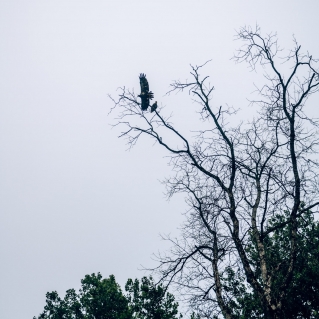 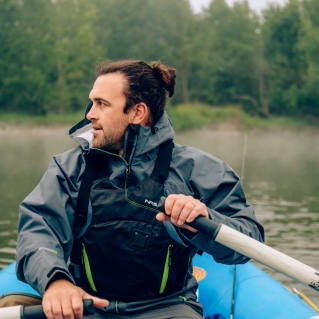 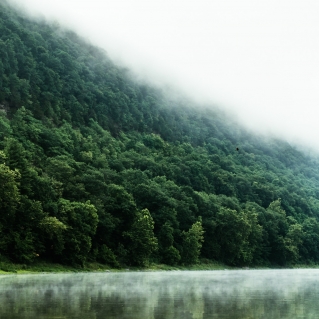