Sea Kayaking off the Lighthouse State

At thirteen, I paddled my first river in South Africa. The Orange River captivated me like nothing else I had experienced in my short life. And at that young age, I decided to build my life around paddling rivers: from international raft guiding to kayaking expeditions in Peru, Norway and South Africa, to name a few. Fast forward twenty-two years and I’m lucky enough to still put ‘exploring rivers’ on my resume, now making a living with my camera in hand.

Something else you should know, I grew up surfing the sharky waters of South Africa. I love the ocean. But still, nothing has ever seemed cooler to me than whitewater kayaking. And I never once thought about the skill set I had and how it might transfer to other paddling disciplines, until now. 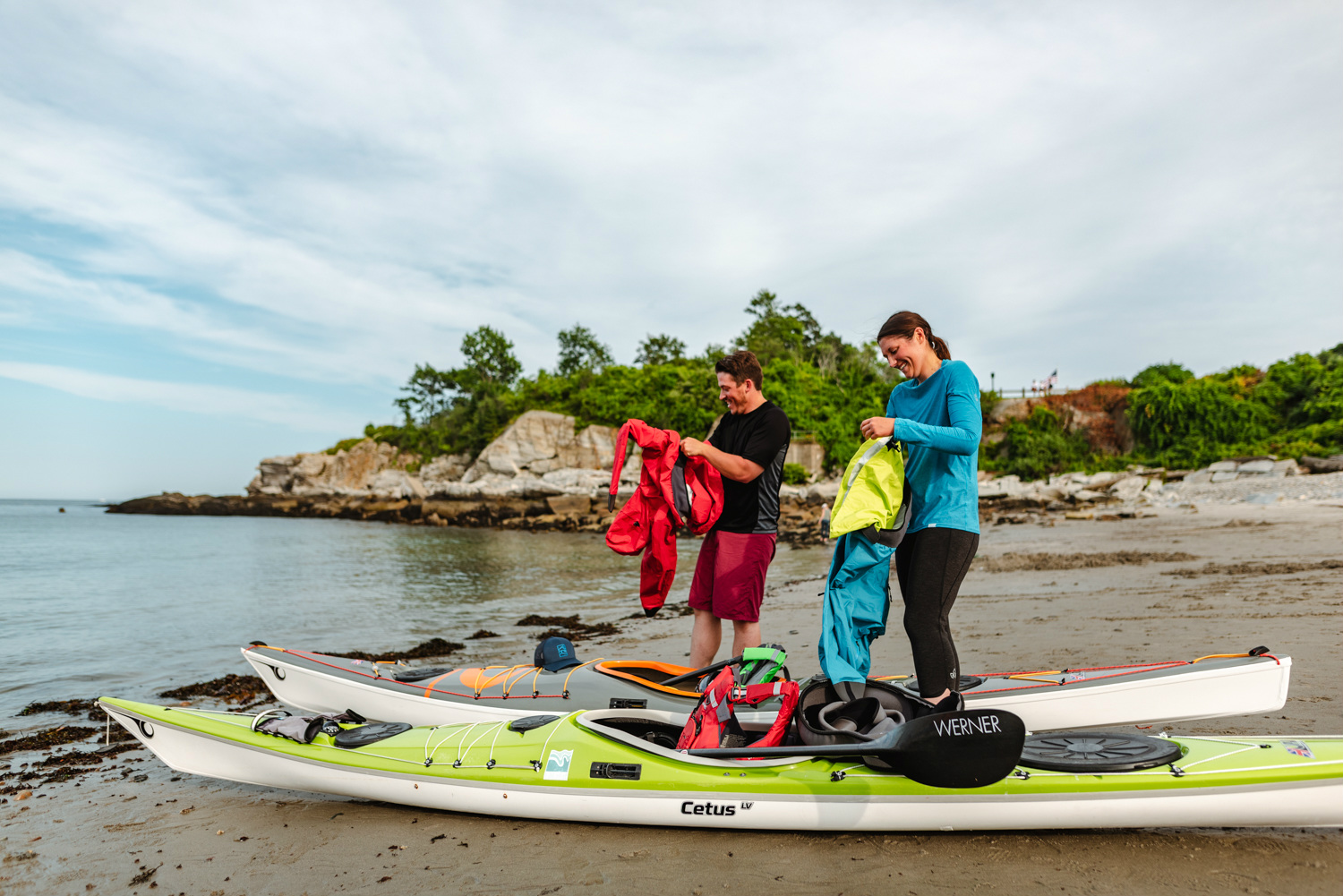 After spending time in Maine on a couple of shoots, I felt the urge to connect with the Atlantic again. For several years, I’ve followed Sea Kayak New England on Instagram. Both Registered Maine Sea Kayak Guides, the owners, Jonathan and Kelsey Oltz, learned under sea kayaking legend John Carmody. (I would suggest you Google John if you aren’t familiar with him, but considering he has zero online presence, you’ll just have to take my word for it)

Seeing as Jonathan and Kelsey are both accomplished paddlers, I reached out to see if they had any interest in showing me their backyard of South Portland, Maine, through the lens of a sea kayak. After many text messages and a phone call or two, the day arrived to explore the coast.

It was mid-August when I met them at the parking lot of Portland Head Lighthouse. Dubbed ‘the Lighthouse State,’ Maine is pretty known for its abundance of lighthouses. In fact, 65 historical lighthouses stand along Maine’s 3,478 miles of tidal shoreline (including the coastline, inlets and islands). 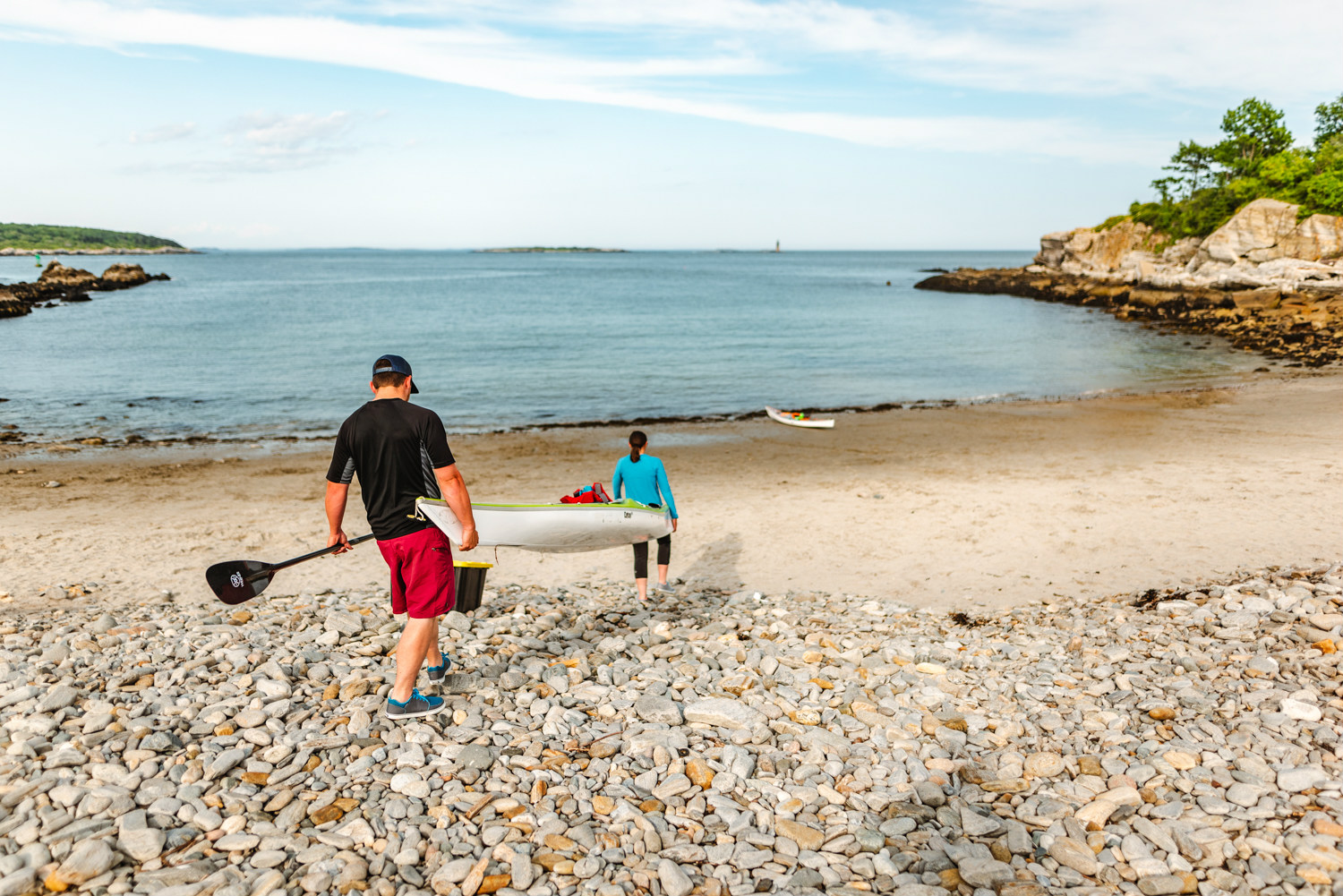 When I arrived toting a 12-foot kayak on my roof, swarms of tourists—thicker than mosquitoes on a June evening—cast awkward stares in my direction. Their cameras hung at half-mast as they paused from taken their umpteenth photo of so-and-so standing in front of—yet another—lighthouse to stare at me. I chuckled to myself. I planned to take umpteen-and-one photos of lighthouses but from the seat of my kayak instead of from a parking lot. And I knew I was about to experience this stunning landscape in the best way possible.

We parked next to a pebbled beach, a lighthouse towered above us to the right and an old army barracks stood guard on the left. The sun sat low in the sky as the afternoon turned to evening. We changed into our dry tops, PFD and skirts. A routine so familiar to me, but this time, unlike the fresh air of the river, I smell the ocean.

“We’ll get you in the boat,” Jonathan said, delving into our paddling objective for the afternoon. “Let you get your sea legs,” he laughed. “Then head straight across the bay to those islands where we can play in the whitewater.” Then, we’ll head to that old abandoned lighthouse and back across to Portland Head,” he finished. The thought of exploring an old abandoned lighthouse sounded awesome, but wait, hadn’t he said whitewater? 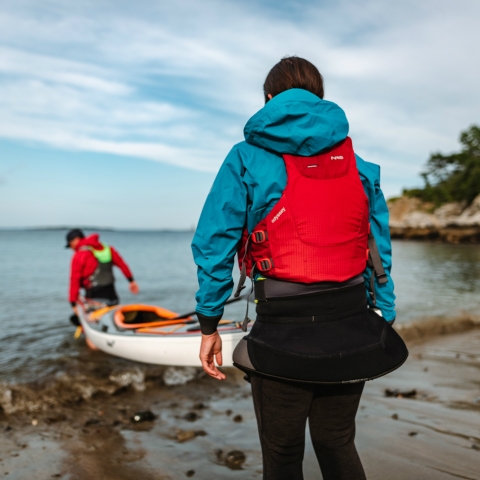 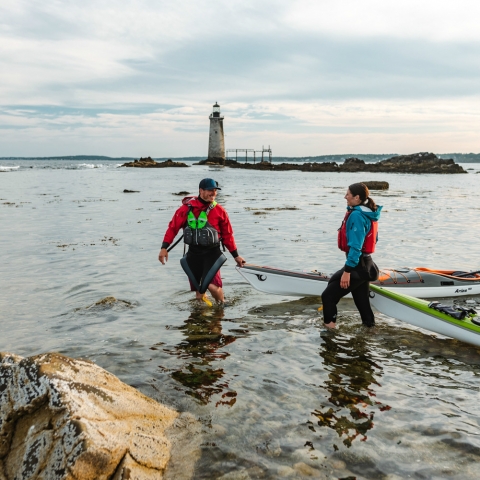 We pushed off from shore into the salty sea. As a commercial fishing boat motored past us, I couldn’t fight the urge not to take a photograph. I make a career taking photos from the water. I pride myself in being able to paddle and shoot, not simultaneously, but transitioning from paddler to photographer in a seamless way. But when I pulled out my dry bag from between my legs in this sea kayak, I immediately started to wobble.

It’s embarrassing to admit how close I came to capsizing—and I could still see our launch point. I can sit in my whitewater boat and shoot photos from the water all day long, but these narrow sea kayaks are something else. I did, eventually, regain my balance and get the shot. 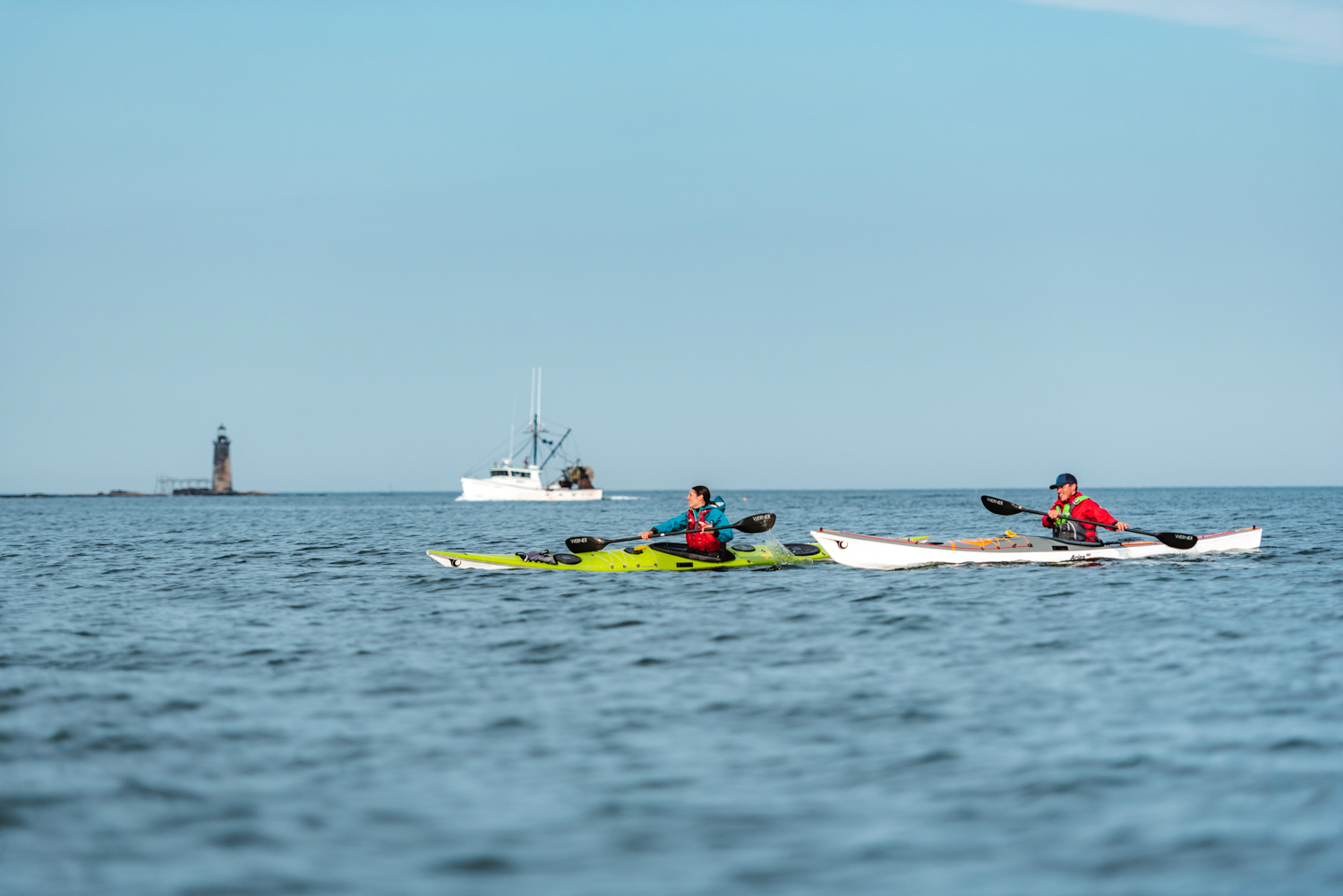 We made our way across the bay, rising and falling with the swell as it pushed its way to shore. The sea kayak glided through the water and even though I wasn’t on a river, I was immediately taken to my happy space and the feeling of freedom and weightlessness. We arrived at the island and paddled past some rocky cliffs; the waves crashed against the rocks and I understood what Jonathan meant about the ‘whitewater.’

Kelsey grabbed a helmet and paddled straight for the waves. Although I was eager to join, I didn’t have a helmet or know how to approach the waves. What I did know: rocks hurt so I kept some distance from the action. Jonathan joined Kelsey and they looked like they were having a blast!

My whitewater-envy must have been palpable. They headed toward friendlier whitewater and taught me how to approach the waves. Surprisingly, I found myself confident and comfortable and within minutes I was dodging rocks, bracing and draw stroking around a boulder garden. The skills I possess from river paddling came into play and I felt right at home. 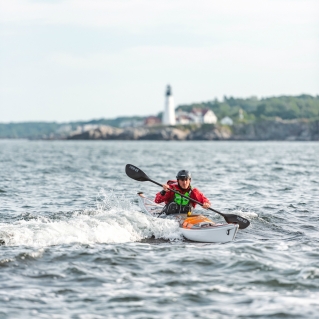 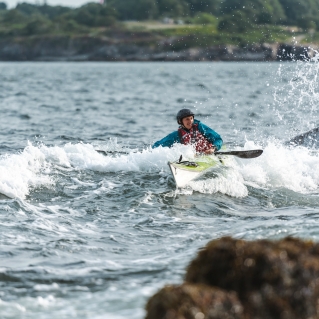 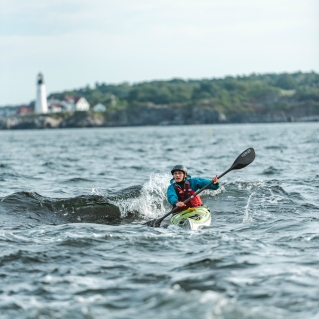 When the sun started to dip toward the horizon, we switched gears and headed toward the island with the abandoned lighthouse. We stopped and stretched our legs on a small beach on the leeward side of the island. It amazed me how much fun I was having exploring this coastline in sea kayaks and how familiar the sensation of paddling whitewater in the ocean was.

Maine has such a stunning coastline, filled with inlets, bays and islands. In fact, the Maine Island Trail Association has created a trail system for small boaters that connects the border of New Hampshire to Canada. Over 200 wild islands and bays offer overnight camping. I wondered if anyone has paddled the entire stretch in one go. (John Carmody, maybe?) The trail system is based on a handshake agreement between public and private landowners. Turns out, the trail constantly evolves as the association seasonally adds and removes sites. 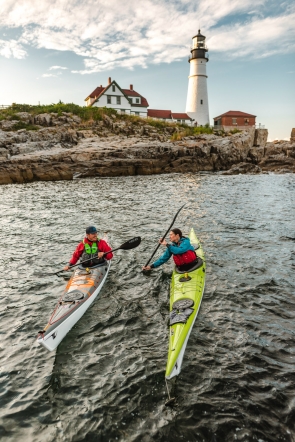 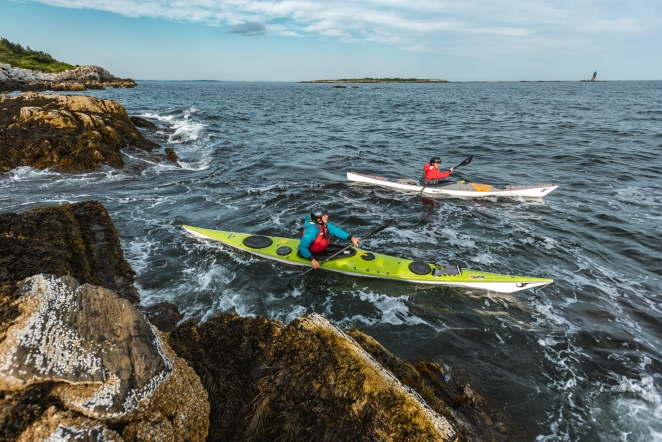 For the last stop of our tour we headed back to Portland Head Lighthouse. Crossing the bay made me a little nervous, especially as I watched a huge boat motor its way toward us. Kelsey reminded me of the personal paddling craft right of way laws—we are tiny vessels so we must give way. We upped the pace and crossed the waterway before the boat came anywhere near us. I pulled the hood of my Riptide Jacket over my head to keep warm as we paddled into the shadow of the lighthouse and the temperature dropped. Tourists still wandered around the park, snapping family photos with the lighthouse. 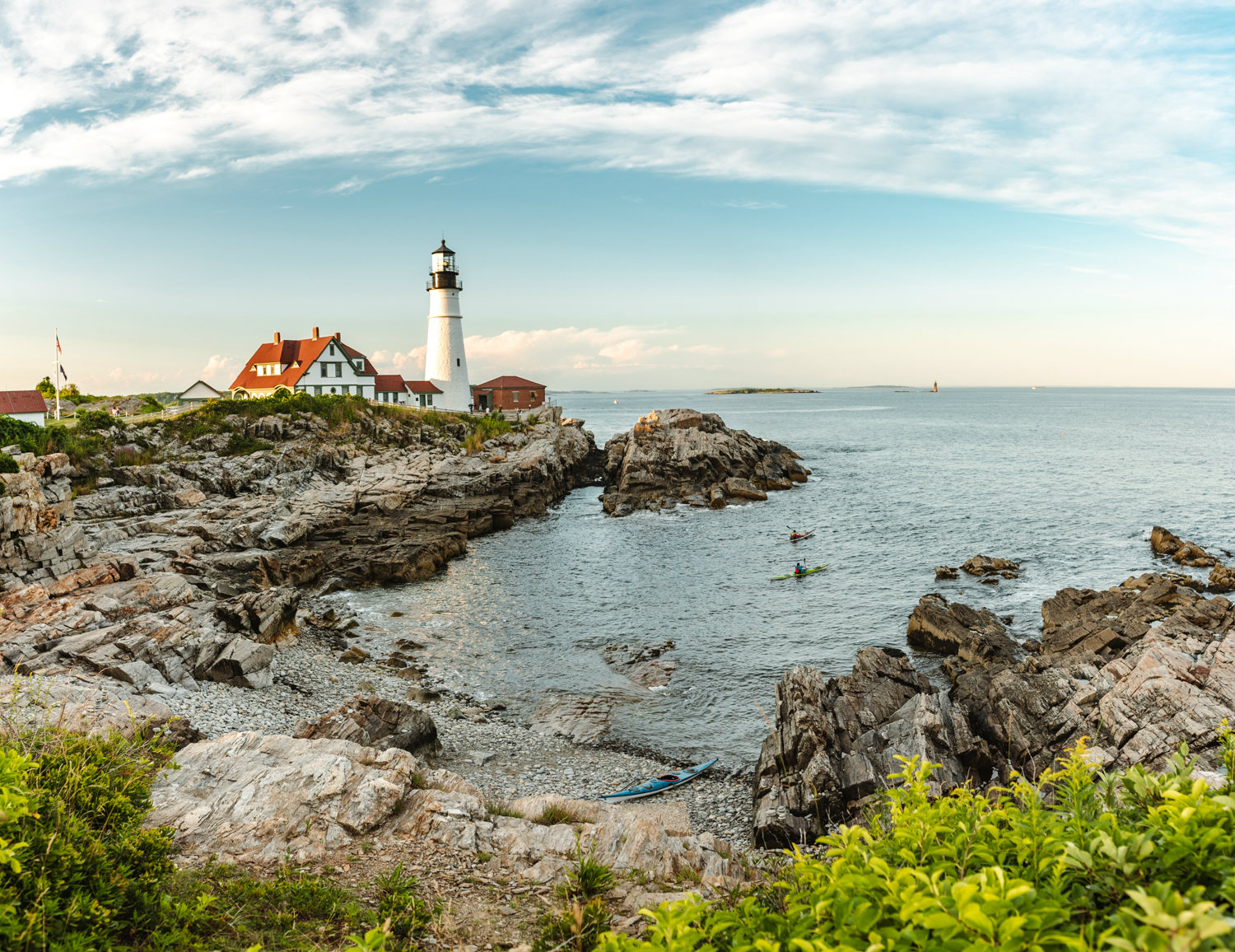 During our entire paddle it never occurred to me that the city of Portland was just five miles north of us. We didn’t see it once, never really heard the hustle or bustle. We wrapped up our paddle surfing some small waves back to the cobble stone beach. The sun now set, we quickly packed up our boats and gear and headed to a lobster shack Jonathan had talked about. No trip to Maine would be complete without a lobster roll. 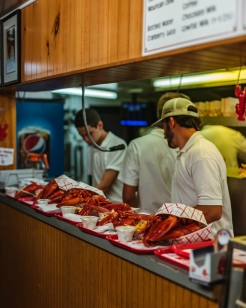 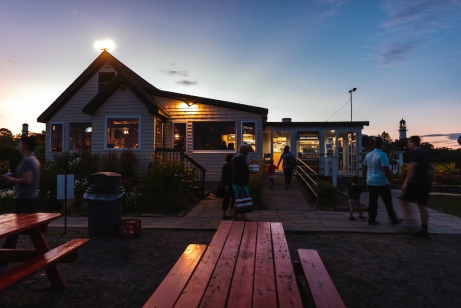 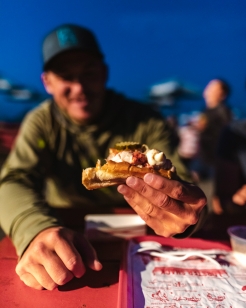 The best part of this new paddling experience was that I learned that my whitewater kayaking skills crossed over to another discipline of paddling. The door is now opened wide to do more of these types of trips, maybe next time an overnighter. And I guess this crossover goes both ways—if you’re a sea kayaker, don’t be afraid to try out some whitewater paddling. We both have more skills than we think we do.