My paddle freezes mid-stroke, halted abruptly on its next pull into the frigid North Atlantic as my attention pivots to the source of what sounds like a thunder crack. But there was no lightning, and these clouds scudding low across the sky are not thunderheads.

A thousand feet away, a massive iceberg rolls in the ocean, set free from its anchor of weight as a behemoth piece of ice cracks off its depths. We turn our tiny fleet of sea kayaks to take the waves from the event head-on. But a few minutes later, only gentle ripples rock our boats, the force dissipated across cold distance.

We regard the ten-story icebergs all around us with new reverence and not a little bit of trepidation.

As we resume our paddling, our East Greenlandic guide, Julius Nielson, tells us that Sermilik Fjord used to freeze solid in winter with sea ice, making a nearly seamless connection with the tidewater glaciers descending from the ice sheet just across the channel. That ice sheet is the second largest in the world, behind Antarctica, and accounts for the vast majority of the polar ice cap. It’s two miles thick at its center, and stretches 1,500 miles north to south, covering 80% of Greenland.

But Sermilik no longer freezes in winter, Nielson says. And this summer, scientists have measured unprecedented melt of the ice sheet while watching its center soften to slush in some spots. Most of these icebergs we’re threading through have broken from the Helheim Glacier just north that’s been calving so enormously, as well as from its sister the Midgard Glacier that seals off the fjord to the east.

Neilson tells us about a conversation he had last week with a sailboat captain who’s long been offering tours to this isolated region. The captain believes that in ten years the Midgard will be gone completely and he’ll be able to sail straight through the fjord to the ocean. Nielson thinks it’s more like seven. 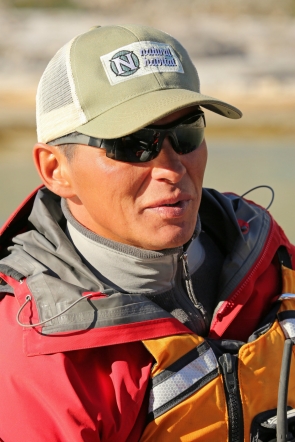 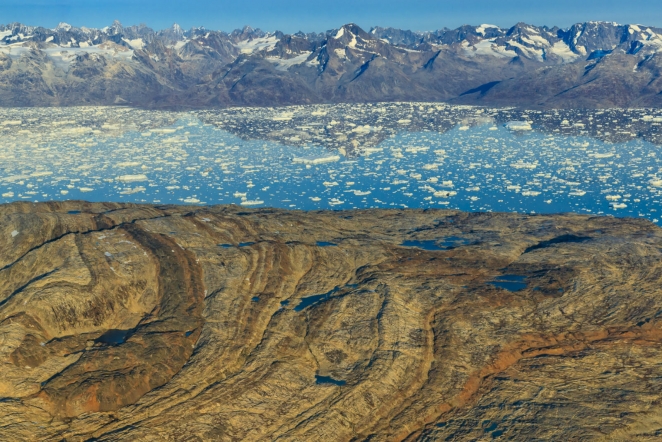 Our paddling allows for a slow passage through this region, which seems fitting for a landscape that’s been defined by the geologically slow passage of time. East Greenland, more remote and far more sparsely populated than the west coast where most tourism takes place, is also much more dramatic.

The fjord is bounded with high-mountain basins carved smooth by heavy restless ice. Jagged peaks that escaped its transient weight, called nunataks, rise 5,000 feet into the Arctic sky before plunging straight down into the ocean without hesitation. The skyline rivals any Patagonia silhouette, but it’s the background music that puts this place over the top. These northern waters are far from quiet.

Over the gurgling of our paddles dipping rhythmically on their strokes, intermittent deep thunder from myriad restless glaciers echoes over the water. And there’s another constant sound, almost like a river: the soft crackling of thousand-year-old air bubbles streaming to the surface as these ancient pieces of ice devolve into the sea.

The low clouds have muted everything to grey. In my meditative paddling, I realize I never knew that there were so many shades of it, that grey is actually a rainbow. Then the clouds part like a curtain, the sky clears abruptly to blue, and everything crystallizes into a brilliance heartbreaking in its clarity—a feeling just like when your understanding of something expands greatly and suddenly.

I finally notice the tears falling down my cheeks. I have been staggered by this place.

In September, an article came out in The Atlantic, written by a seasoned travel writer, on how the best thing we can all do to combat climate change is to… stop traveling. It was spurred by a new study that the environmental impact of tourism is responsible for 8% of global emissions. But that 8%, while not insignificant, seems diminutive next to the 25% of global emissions from electricity and heat production for our buildings and homes, or the 24% from agriculture and deforestation.

In this context, perhaps it’s not about stopping travel, which has the potential to open our eyes to what’s at risk and inspire us to fight for it. (If every person on the planet could have the experience that I am on Sermilik Fjord, I would argue that it’s worth the 8% of global emissions.) Rather, in this era of climate change that requires landscape-level systemic change to make a difference, it’s about how we choose to travel.

For example, this trip to Greenland has been entirely carbon offset by Natural Habitat Adventures, including food, how it’s grown, and where it’s shipped from; transport, including our international flights, helicopter and boat rides to get to this remote spot on the map; power for the low-impact Base Camp on the tundra at which we’re staying, that limits travelers to less than 100 per year; and even the company’s headquarter operations on the front end.

Carbon emissions are measured in metric tons, and so offsets are measured in equivalent reductions of metric tons. There are two main forms of offsetting, explains Court Whelan, Natural Habitat Adventures’ director of sustainability. There’s sequestration, i.e. drawing carbon atmosphere, which mostly means planting trees. Then there’s preventing carbon emissions in the first place, which can include everything from the obvious solutions of investing in and building projects like windfarms, solar panels, and other renewable energy; to the less obvious ones, like providing water filtration systems to villages in developing countries so that people don’t have to cut wood and burn it to sanitize drinking water.

If you’re going on a guided trip, it’s worth vetting the outfitter or tour operator to see if and how they offset. But you can also offset your trip on your own, and you don’t have to have a PhD like Whelan’s to figure out how to do it.

There are numerous companies out there now that will calculate travel emissions and offer projects travelers can invest in to offset their trips. MyClimate.org, for example, provides options for calculating your flight, cruise, car, or your whole carbon footprint. Whelan notes that it can be overwhelming for the average traveler to track every single carbon emission generated by a trip, and recommends focusing on offsetting what emits the vast majority of travel emissions: flights.

MyClimate.org calculates my flights to Greenland to equal 2.1 tons of CO2. It’s estimated in a dollar amount of $58-$63, which I can pay to invest in a range of projects the organization partners with, including efficient cookstoves for women in Kenya, helping small farmers with reforestation in Nicaragua, and Swiss renewable energy projects. It seems a small price to pay on top of my full trip cost.

I ask Whelan if one carbon offset project is more reputable or effective than the next. As in, what if I pay for a reforestation project that’s actually just planting a monoculture of trees slated for harvest in ten years?

“There was that kind of scrutiny a decade ago, and this is where certification bodies came in,” he explains. “Projects that don’t have a certification behind them now will stick out like a sore thumb.” He goes on to assure me that it doesn’t matter whether I choose the wood stoves or the reforestation in terms of how to make my money go farther; they’re all measured to offset the same metric ton. 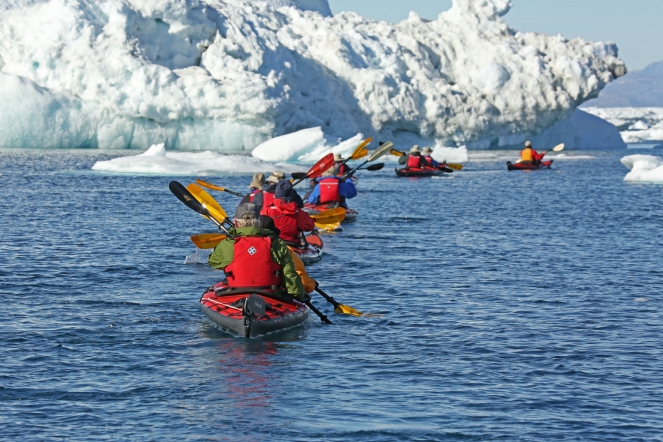 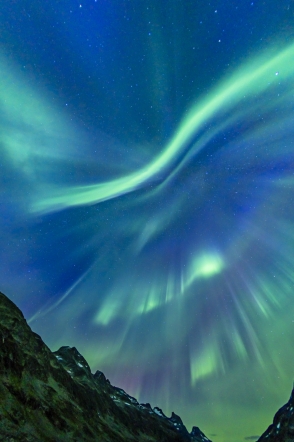 Hours after we’ve beached our kayaks and left those cracking icebergs to their salty fate, I emerge from my wall tent into the freezing night. As I watch the Northern Lights dance merrily over the ocean just as they have since the beginning of time, regardless of what hangs in the balance down below, I find some sense of hope.

There is so much innovation in this world, and so, so many people whose understanding of our planet’s precarious position has expanded greatly and suddenly. I can’t help but have a little faith in us to save it. I, for one, will do everything in my power, and I know everyone who’s seen what I have will do the same.