Fun Fish Friday, where NRS Fishing Team Anglers share five fun facts/tactics about their favorite fish species. We compiled the first five posts into one place in case you missed them. Follow NRS Fishing on Instagram and Facebook for more!

Chris McAdams | Westslope Cutthroat
One of many fond memories of fishing for the westslope cutthroat took place in interior British Columbia. It was over twenty years ago, before we could afford a drift boat or raft. We were walking along a cold, clean, intact western trout stream. I noticed the emergence of a few green drake mayflies and a few cutthroat trout feeding on the surface. I tied on an attractor pattern, the royal wolf was a crude tie of mine.

These cutthroats were throwing caution to the wind, as they would devour our flies upon landing on the surface. The hatch eventually diminished, and nothing but “Spinners” were on the water (The dead mayflies). Trout continued to feed on those until late evening. We would continue to return to that exact location for many years, hoping for a similar experience. 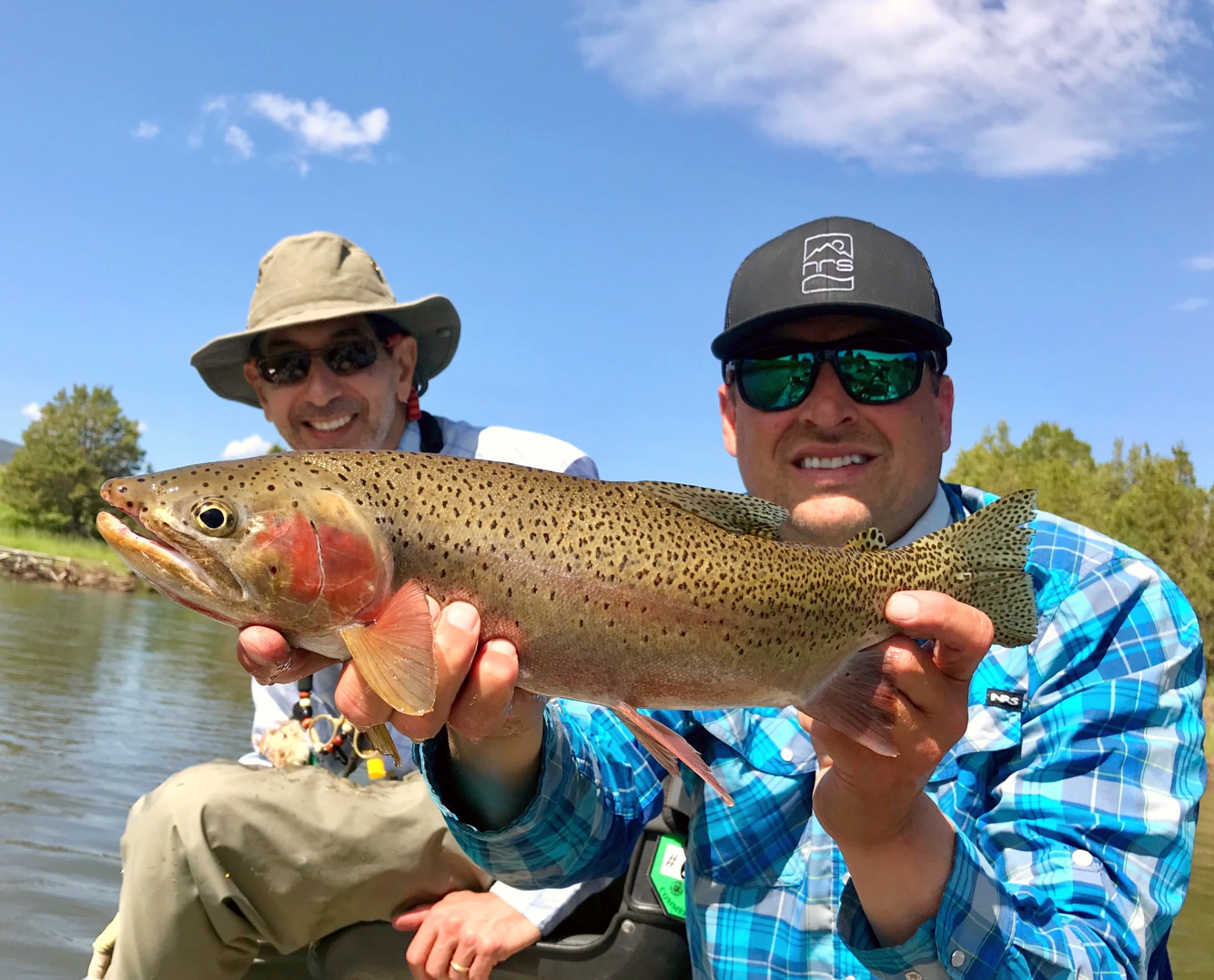 1. Although commonly associated with the state of Montana, the historic range of Westslope Cutthroat Trout (Oncorhynchus clarkii lewisi) is the most widespread geographically among the 14 subspecies of inland cutthroat trout.

2. It’s very important to handle these native trout with care. Always practice catch and release. If the water temperature is above 60 degrees refrain from taking them out of the water and use a barbless hook to help ensure an unharmed release.

3. The introduction and spread of non-native trout such as brook, rainbow, brown, and lake trout is considered by many fisheries scientists to be the major threat to this precious native trout. However, mine waste, climate change, logging, and, in my opinion, fishing pressure in certain drainages, threatens the Westslope Cutthroat as well.

4. Cutthroat trout are known for not being all that picky when feeding on a prolific hatch. And something about the green drake mayfly makes these native trout lose any sense of caution. However, they are known to grow more ‘educated’ after repeatedly getting caught, which requires anglers to adapt to their new feeding patterns.

5. If you find yourself in need of adaptation, try longer leaders, more precise fly patterns, and a stealthier approach. 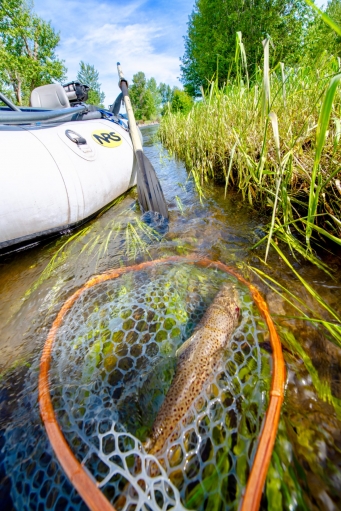 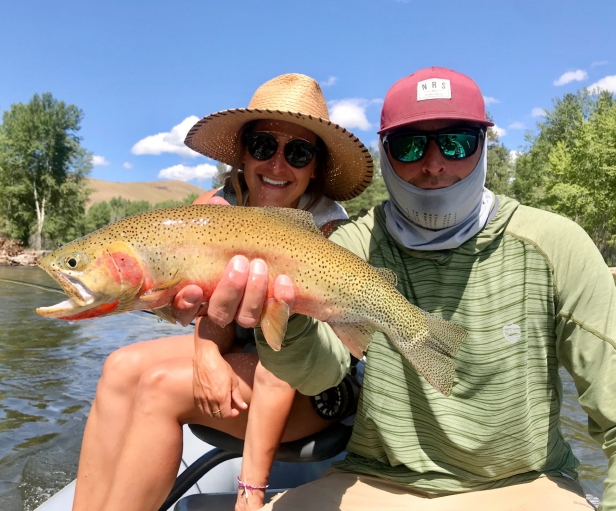 Jay Wallen | Smallmouth Bass
Growing up, my father skipped all the traditional first fishing expeditions and we went straight for the smallmouth on high mountain reservoirs in east Tennessee. To this day, the smallmouth bass has to be number one on my shortlist of favorite species to target. The vicious, aggressive nature of the smallmouth and its ability to fight its way off the hook is part of the draw that makes this species so much fun to chase. 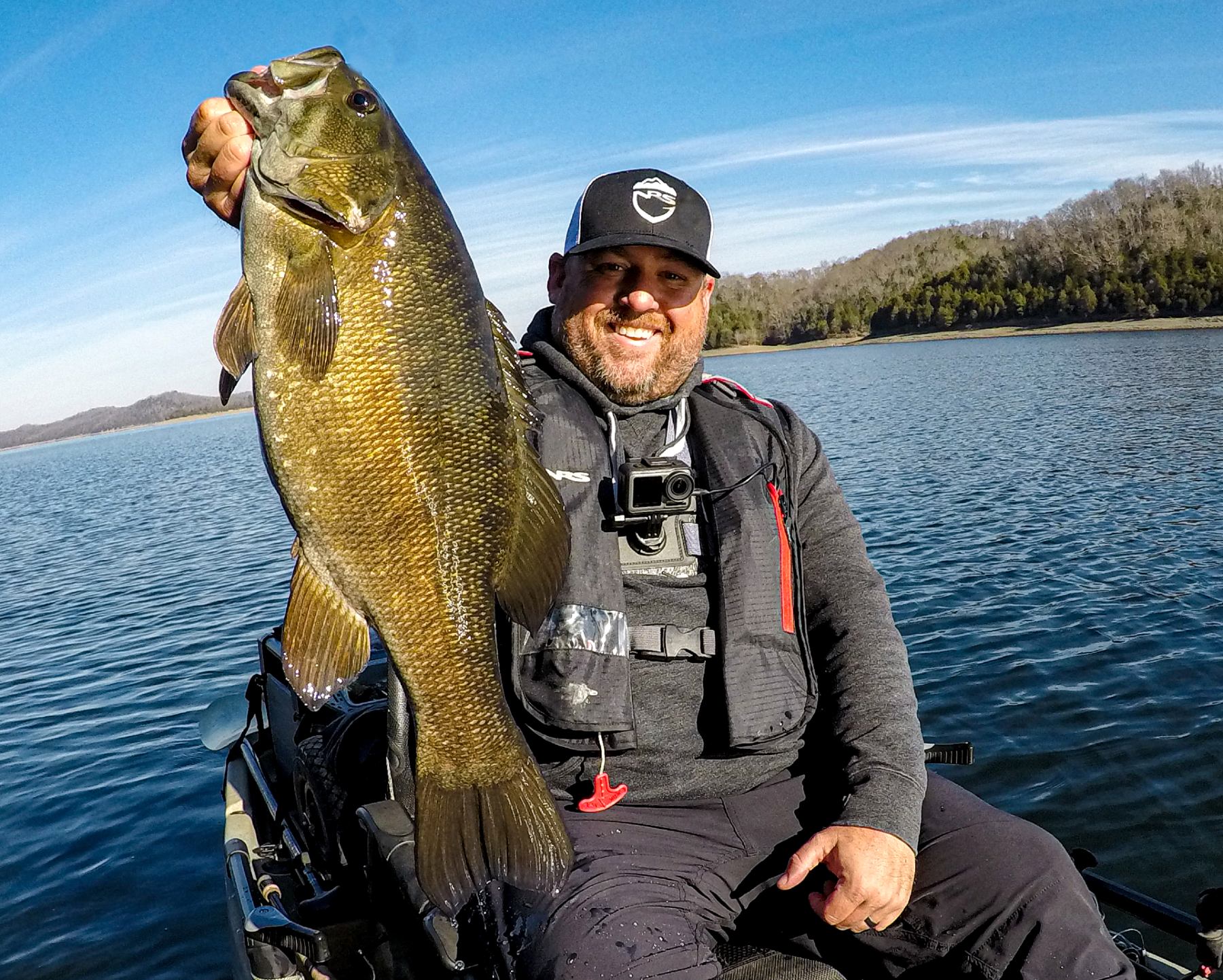 1. Fellow Kentuckian David L. Hayes holds the world record for biggest Smallmouth caught. Weighing in at 11 pounds, 15 ounces, he caught this behemoth on Dale Hollow Lake, which happens to be my favorite fishery.

3. The beautiful thing about smallmouth is how their behavior and their build vary from big reservoirs to small, fast-moving streams. When fishing on lakes, use light line and deep-water tactics. While topwater, jigs and soft plastics are good on the fast-moving streams.

4. Smallmouth will often spawn in deep water especially in really clear water, so don’t be afraid to probe those 15-20’ depths on the clear lakes.

5. Smallmouth can also be insanely aggressive during the spawn. In the northern parts of the country, this occurs between May and June. In the south, it can be earlier in the year around March and April. Look for water temps anywhere in the 50–60-degree range. 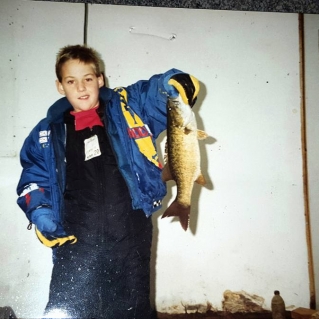 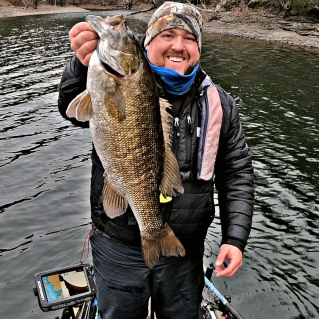 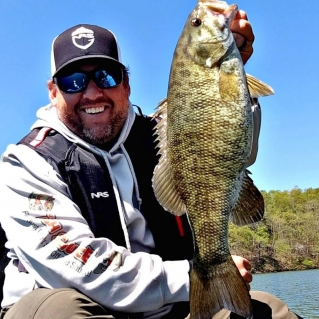 Robert Field | Roosterfish
When it comes to game fish, you couldn’t dream up a more worthy adversary than the infamous pez gallo. Ferocious strikes, screaming runs, brute strength and the coolest haircut under the sea make roosterfish a top bucket list catch. I fell in love with these fish down at Los Buzos Resort in Panama. I’ve seen roosterfish straighten out hooks the size of my hand, snap rods in half and flip the kayaks of grown men. Here’s what I know. 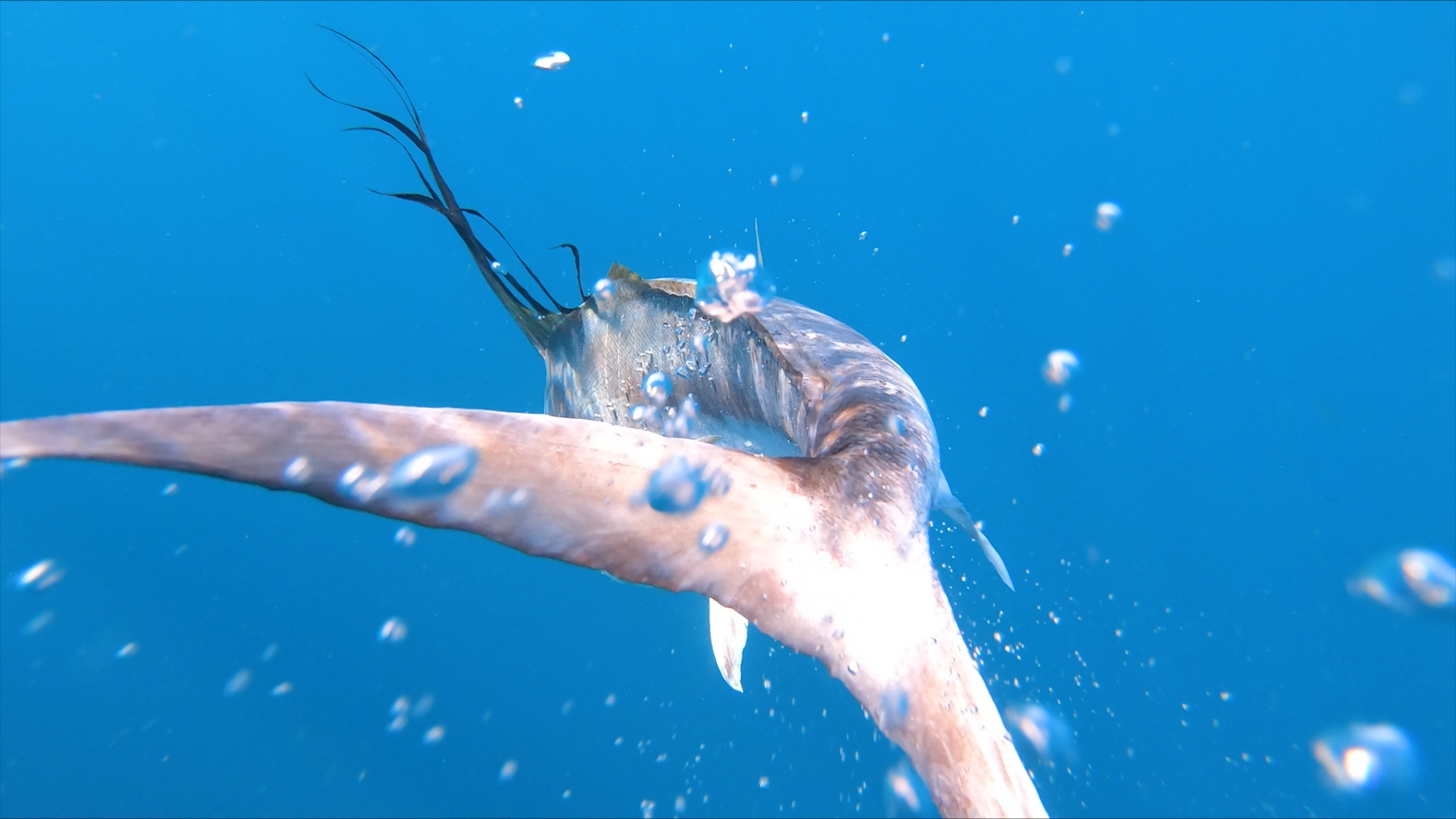 1. The tides on the Azuero Peninsula in southern Panama are intense, with swings averaging 16-18 feet every 6 hours. These huge tides, combined with strong prevailing currents mixing nutrient-rich waters, make for the ultimate fishery. Roosterfish live here year-round to take advantage.

2. Anglers can find small to medium-sized roosters hunting around shallow (less than 40 feet) rocky reef systems or even in the surf—literally in the surf. Cast poppers right into the waves or troll diving plugs along the backside of the breakers. But always be ready to pedal offshore after a strike so you don’t get drug into a bad spot.

3. More often than not, live bait is the key to landing a trophy class gallo. We punch a 12/0 circle hook into the upper jaw of a 2-4 pound bonita, blue runner or trevally and drag it behind our kayaks over deeper reefs (60-150 feet). To be successful, you must maintain your kayak above the reef system despite wind and current to give the live bait a chance to head deeper and swim naturally.

4. When fishing for roosterfish remember this mantra: the bigger the bait, the longer you wait.   When the reel starts screaming, let the fish run in freespool for 8-12 seconds while it works to swallow your giant bait. Once you engage the drag, if you get a good hookup, you’ll know it.

5. Be sure to wear gloves (ahem, NRS Fishing Castaway gloves) when you’re ready to land a rooster and grab it by the lower jaw. Once you’ve got the hero shot, slide her right back in the water and hang on to that lower jaw while you pedal your kayak around to get fresh oxygenated water flowing over her gills. If you got your hands on her, she’s worn out! She’ll start biting you when she’s ready, and the best approach is to lift her up and plunge her back in headfirst.

Learn more about Robert’s five favorite fish, including the Roosterfish. 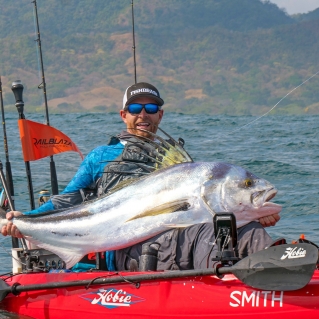 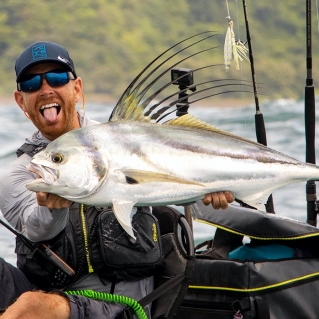 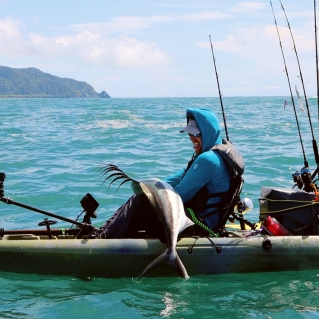 Greg Blanchard | California Delta Trophy Striper
The first time I fished the California Delta the only thing that was on my mind was catching a trophy largemouth. Nowadays, while out on the delta, there’s another fish on my mind: a world-class Striped Bass. 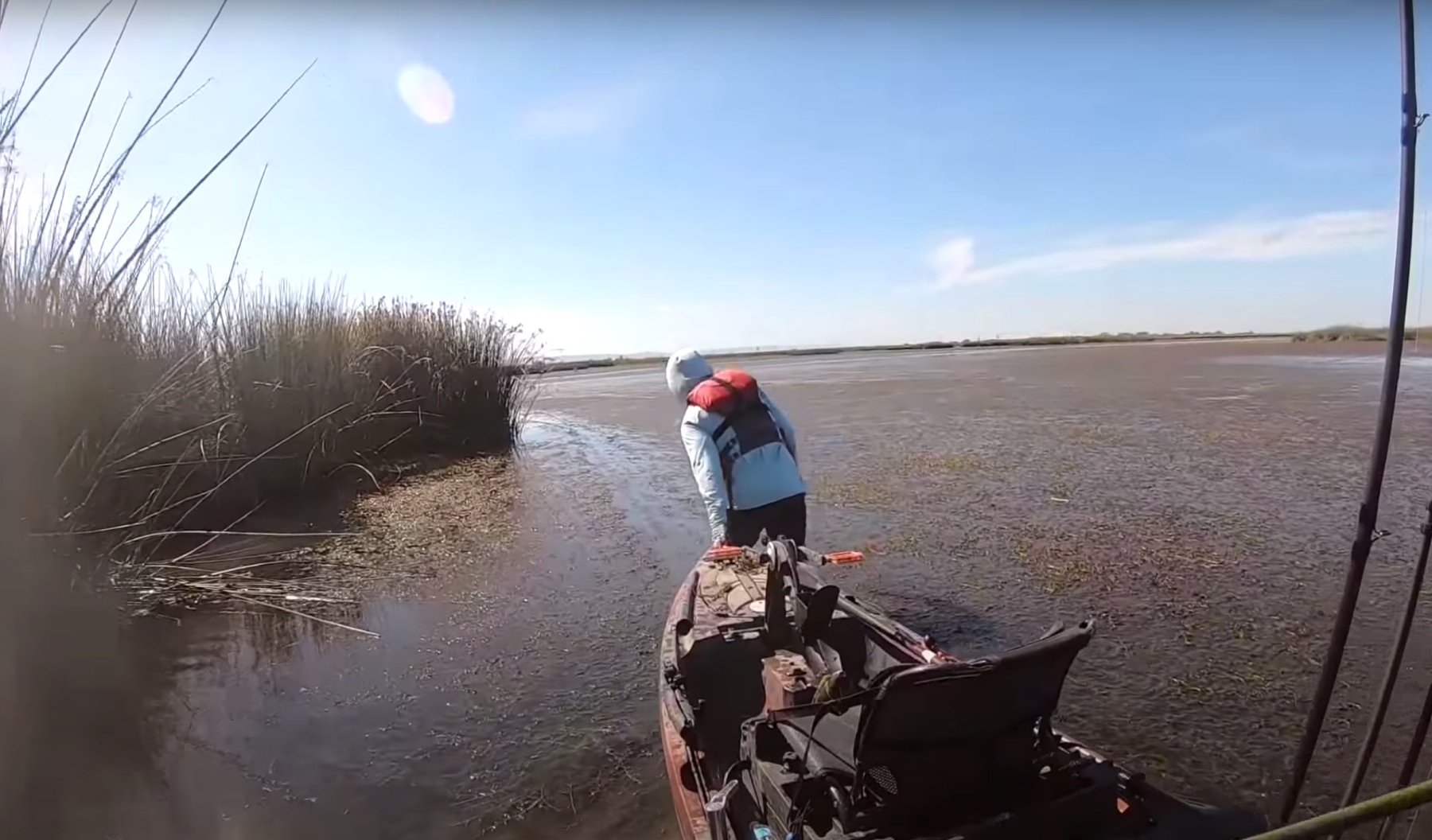 1. The California Delta is an expansive estuary in Northern California. Because of its connection with the Pacific Ocean, it’s a tidal body of water meaning water levels will fluctuate throughout the course of a day. Sometimes there will be tide swings over 5 feet, and if you don’t pay attention you could find yourself dragging your boat through the mud.

2. Striped bass were introduced to California in 1879 when 132 small fish from the Navesink River in New Jersey were released into the San Francisco Bay near Martinez. Today, the striper are beyond plentiful and one of the most popular game fish on the California Delta.

3. Just like trophy largemouth, trophy stripers (over 30 pounds) tend to be lone wolfs. It will usually take bigger presentations like swimbaits or large topwaters to entice them to bite. I also find that fishing on an outgoing tide (water dropping) will typically produce more bites for me.

4. One of the best times of year on the California Delta to catch a world-class Striper is during the later winter/early spring months. Throwing a large swimbait (8” or more) first thing in the morning up in the shallows is a proven technique to hook into a trophy striper.

5. As with all trophy fish, patience and perseverance is key. One trip will not guarantee a giant striper. But with time and effort, landing that personal best striper on the California Delta is a real possibility that could be a fish of a lifetime. 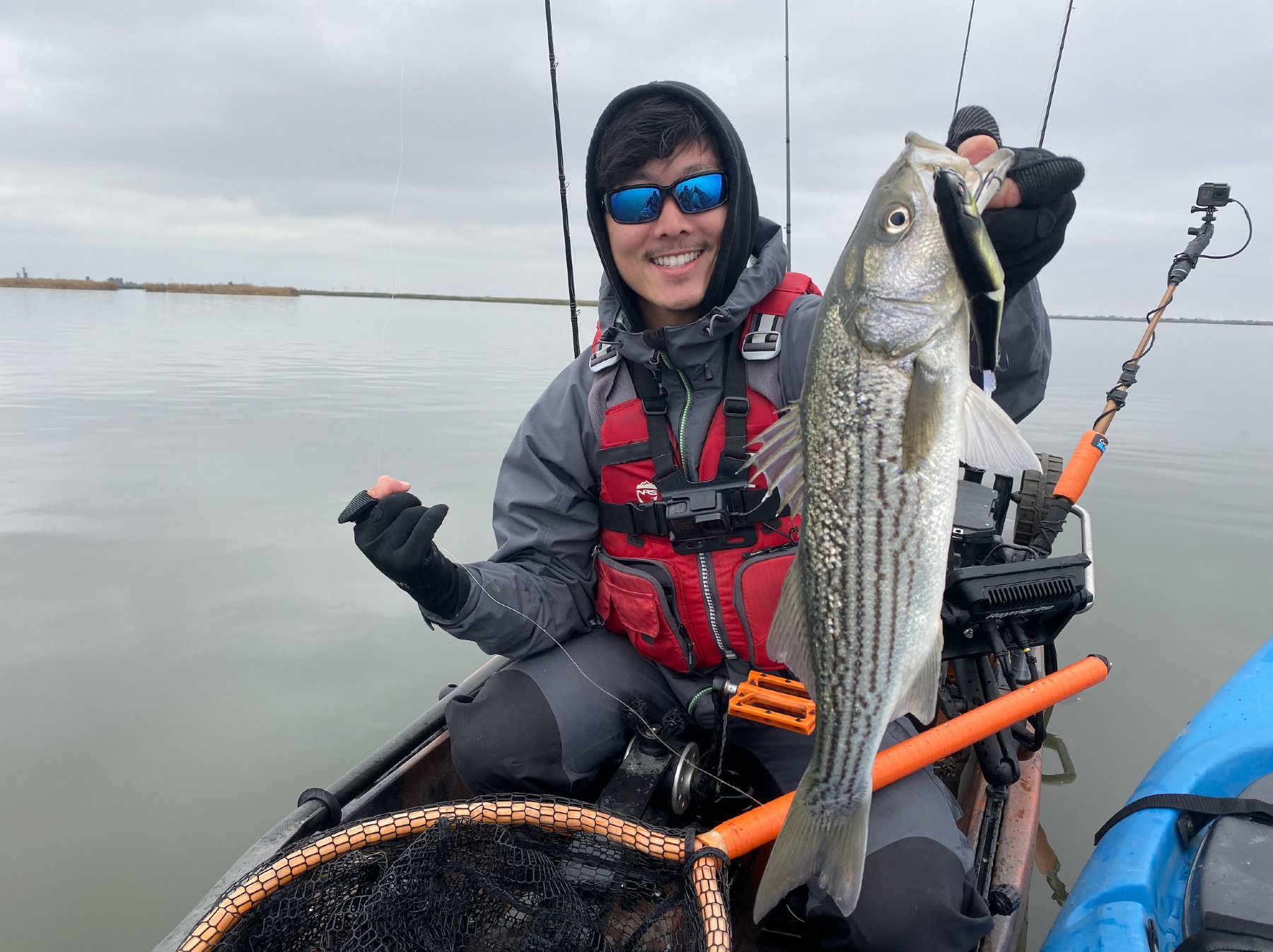 Matthew Eckert | Sailfish
Hands down, my favorite species to target is a Sailfish. We’ve landed over 200 Sailfish from the kayak and it never gets old. From their acrobatic jumps and lightning-fast runs, to the beautiful colors on display, in my opinion, it just doesn’t get any better! 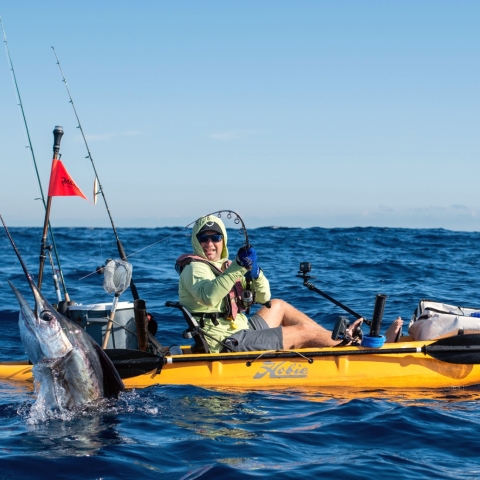 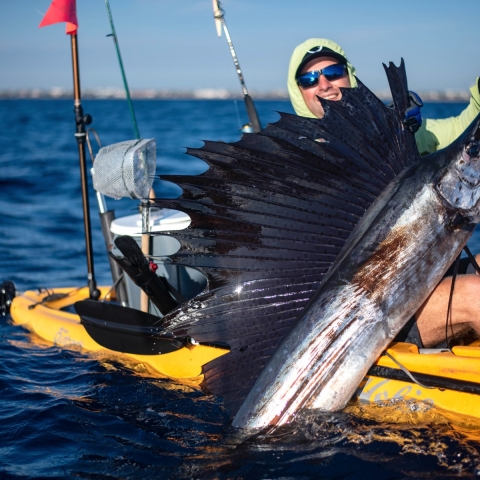 1. The biggest myth around catching sailfish is that the best, or only, time to catch sailfish is in the winter months. While sailfish are absolutely caught in the winter, the spring and early summer are some of the best months to target them in southeast Florida—and it gets totally neglected. Lots of anglers switch from live bait fishing to trolling because they want to target Mahi and Blackfin Tuna. When trolling you basically eliminate Sailfish. Those who choose to fish live bait year-round will catch Sailfish in good numbers.

2. It’s extremely important to revive these fish before releasing them. This is where having a peddle drive kayak is key. Sometimes it may take up to five minutes for a sailfish to gain its strength back. For the health of the fish, you want to peddle with the sailfish fully submerged in the water until it’s strong enough to swim off on its own. The way I know it’s ready to be released is I’ll slowing open my hand up around the bill, if I feel the fish turn sideways, it needs more time, if its swimming upright and tail moving back and forth then its ready to be released.

3. Live bait is the key to targeting these fish, big baits such as Goggle Eyes and Blue Runners are premium baits and will give you the greatest odds of hooking a sailfish.

4. We always catch and release sailfish, but sometimes the fish will get gut hooked or tail wrapped during the fight and will unfortunately die. Instead of wasting the fish, if possible, we will keep it and smoke it. Sailfish make a phenomenal smoked fish dip. Let it marinate in a simple brown sugar brine overnight, then smoke it the next day and you’ll be shocked how good it is.

5. Sailfish are the fastest fish in the ocean. They have been recorded going over 60mph. Make sure you have at least 300 yards of line on your spool and be prepared to peddle at your fish. While we have never been spooled by a Sail, we have come darn close! 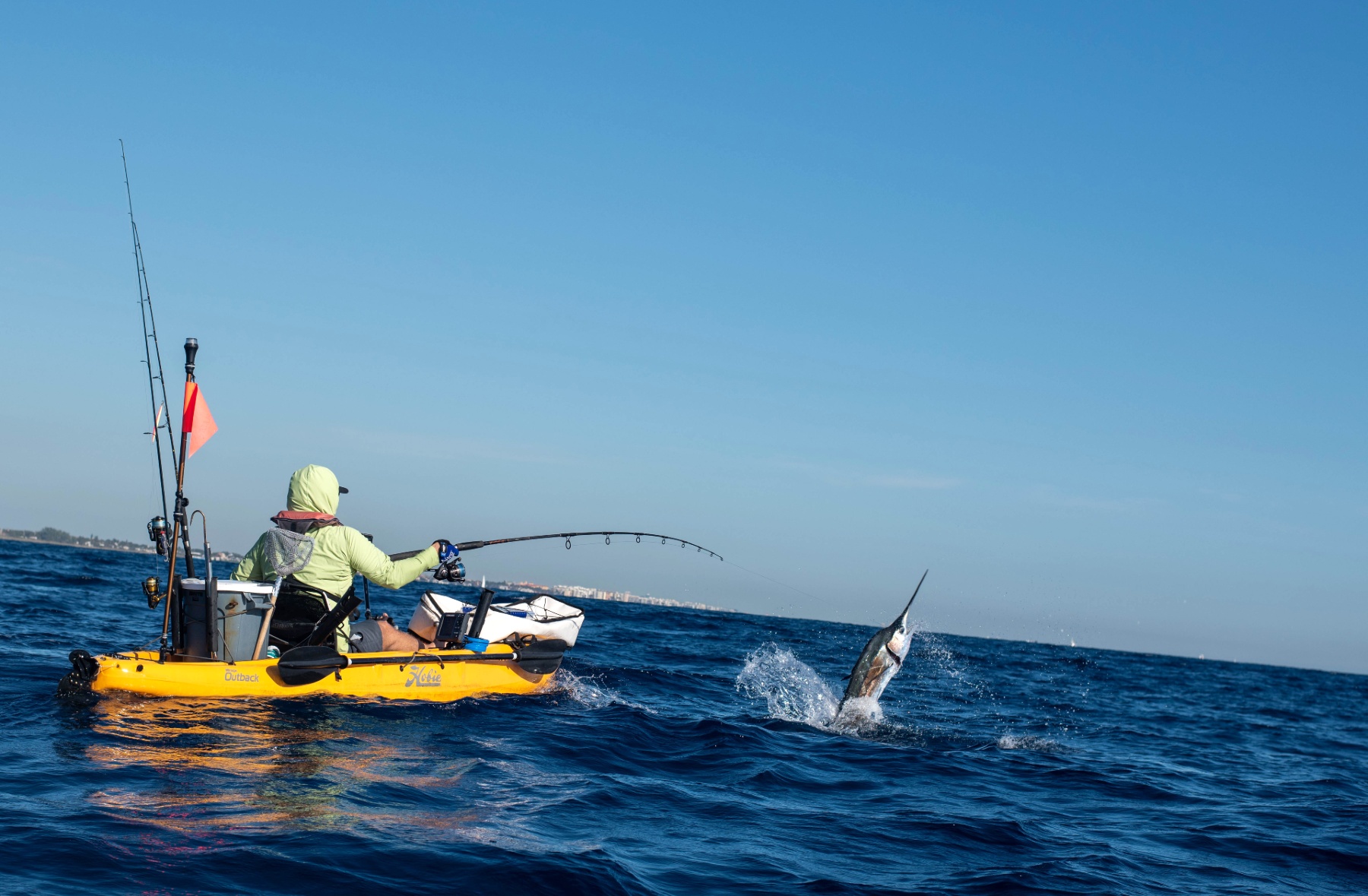