The History of the Himalayan Adventure Girls

As a kid, Radha Tamang walked along the winding dirt paths and rough mountains roads of the Himalayas for four hours just to get to and from school. As a female in Nepal, receiving an education was a privilege and a sign of a shift in culture and attitude. But even with an education, her future was set: finish school, get married, start a family and work to provide for them, scratching out a living in the harsh high-altitude environment.

You’d never guess this little girl, walking in the mist amongst the traditional stone houses and tattered prayer flags, would grow up to be a bold, brave and adventurous whitewater guide. Radha chose to go against the flow. She carved out a life of adventure, travel and rivers. A life filled with challenge and personal growth, confronting gender inequality on the rivers of Nepal and around the world. She chose whitewater and it changed her life. 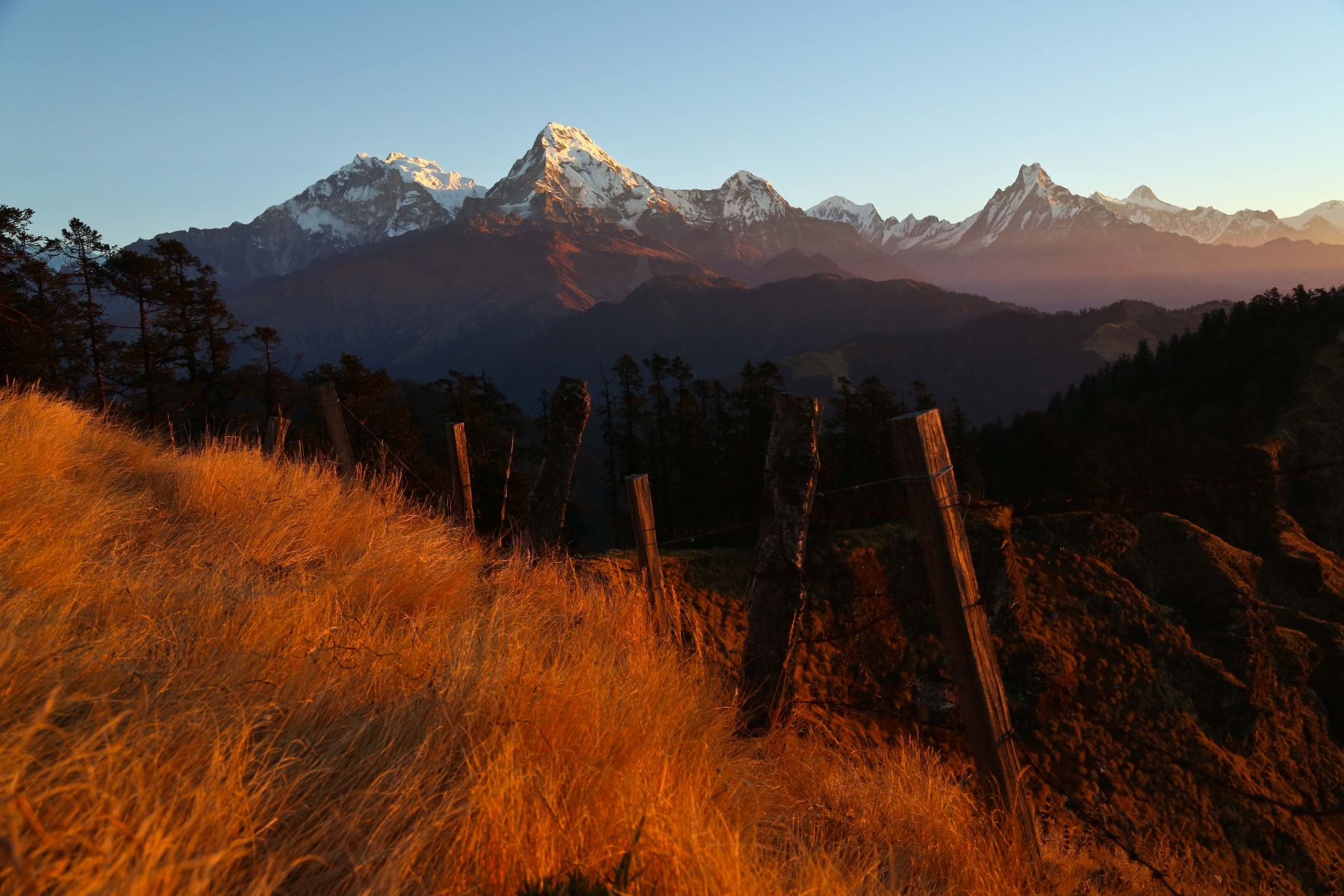 Born in the village of Bhote Namlang in the Sindhupalchok District of north-central Nepal, mountains surrounded Radha. Like most young people in rural Nepal, after finishing school she moved to Kathmandu to seek employment and opportunity.

In 2008, a friend told Radha about an all-female kayak club called Himalayan Adventure Girls. Led and founded by Swedish paddler Inka Gurung and friends, the club focused on empowering Nepali women through whitewater paddling. Radha signed up to be one of twelve Nepali girls on a 10-day training expedition on the Sun Kosi River.

“Before I met Inka, I’d never seen a boat or kayak. I was born in the Himalayas, not near big rivers,” says Radha. “Inka invited me to be part of the first whitewater training trip just for Nepali women. And everything changed.” We taught the girls kayaking and rafting skills, whitewater safety, rescue techniques and camp cooking and set up; all necessary tools to become proper whitewater guides.

Giving women the chance to gain skills on the water gave them a chance to pursue careers in the outdoor industry. Inka had no idea this simple kayak club would turn into the first all-female outdoor adventure company in Nepal. And today it has become a movement that continues to break down gender disparity in Nepal.

Inka Gurung was born in Stockholm, Sweden, but her whitewater story also started in Nepal. In 2000 she came to see the tallest mountains in the world. Instead, she got caught up in the world of rivers, diving headfirst into the whitewater lifestyle. “I tried whitewater rafting in Nepal and saw the kayakers playing in the rapids. It was like a religious experience,” she says. “A few days later I took a (kayaking) course on the lower Bhote Koshi River and got myself a job at Equator Expeditions Resort and learned to be a kayak instructor with their staff.”

When Inka started Himalayan Adventure Girls in 2008 it was just a grassroots kayak club. “I had been coming to Nepal for eight years by then, and had never seen a Nepali girl on the river. In Pokhara, I met two girls at a cafe and when they heard I was a kayak instructor, they asked me to teach them. I was thrilled that they wanted to learn!” After a few sessions on the water, Inka thought more Nepali girls would like to learn to kayak. Himalayan Adventure Girls was born—a kayaking club just for Nepali women. 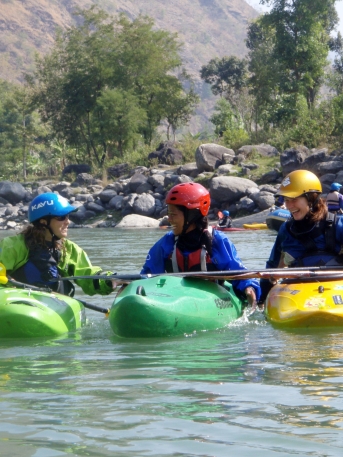 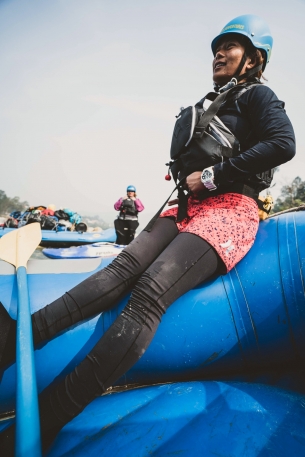 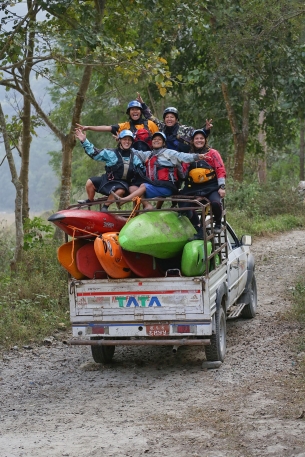 If teaching kayaking to girls who didn’t know how to swim wasn’t enough of a challenge, Inka had to negotiate a very rigid and traditional social system. This included arranged marriages, the expectation to have children at a young age and the notion that women should stay home to look after their husband, children and in-laws while also working the fields, cooking, cleaning and washing.

“As a wife in Nepal you seldom have the freedom you and I have,” explains Inka. “You don’t go out after dark. You don’t travel without your husband, you don’t have an occupation.” Rivers, she thought, could set women free. The water didn’t care their gender, caste or tradition. As Inka got more local women on the water, the Nepali ladies realized they could laugh, smile, joke and enjoy the beauty of the natural world, outside the confinement of a home or village.

Having spent time in rural Nepal, Inka knew that recreation is not a primary concern in poor regions. Her main goal was to help women make a living by rafting and kayaking. “Being born a poor girl, having a nice hobby doesn’t mean much. But getting yourself a profession is everything,” says Inka. “It means two main things: freedom, and a chance to help your family out of poverty. Having fun is also important but it does come further down on the list when you are from Nepal.”

After Anu, Radha, Sita and Kamal, the core group of women from the kayak club, developed solid skills, certifications and a few years of experience working at other rafting and guiding companies, and with help from Rosa Matheson and The Book Project, they transformed the Himalayan Adventure Girls kayak club into a business. With the continuous help of Inka, these four Nepali women run the company, offering kayaking, rafting, trekking and yoga. They are the only all-female adventure guide company in Nepal. They earn a living guiding and travel the world in the offseason, working as guides in Japan, Dubai and Iceland.

Today, Inka has roots in both Nepal and Sweden and runs her own adventure travel company called Far Away Adventures. Inka and her Nepali husband, Amrit, split their time between countries, working, traveling, and paddling with their two young children. But it was an arduous few years getting Himalayan Adventure Girls established. “Many times I worried that the girls would stop because of family problems or difficulties with male staff,” says Inka. “But they have been amazing and so hard working and have had to put up with so much. So many people in the industry have constantly been trying to tell them what to do…but thanks to wonderful support from friends all over the world who have helped out with training, equipment and money, we have been successful.” 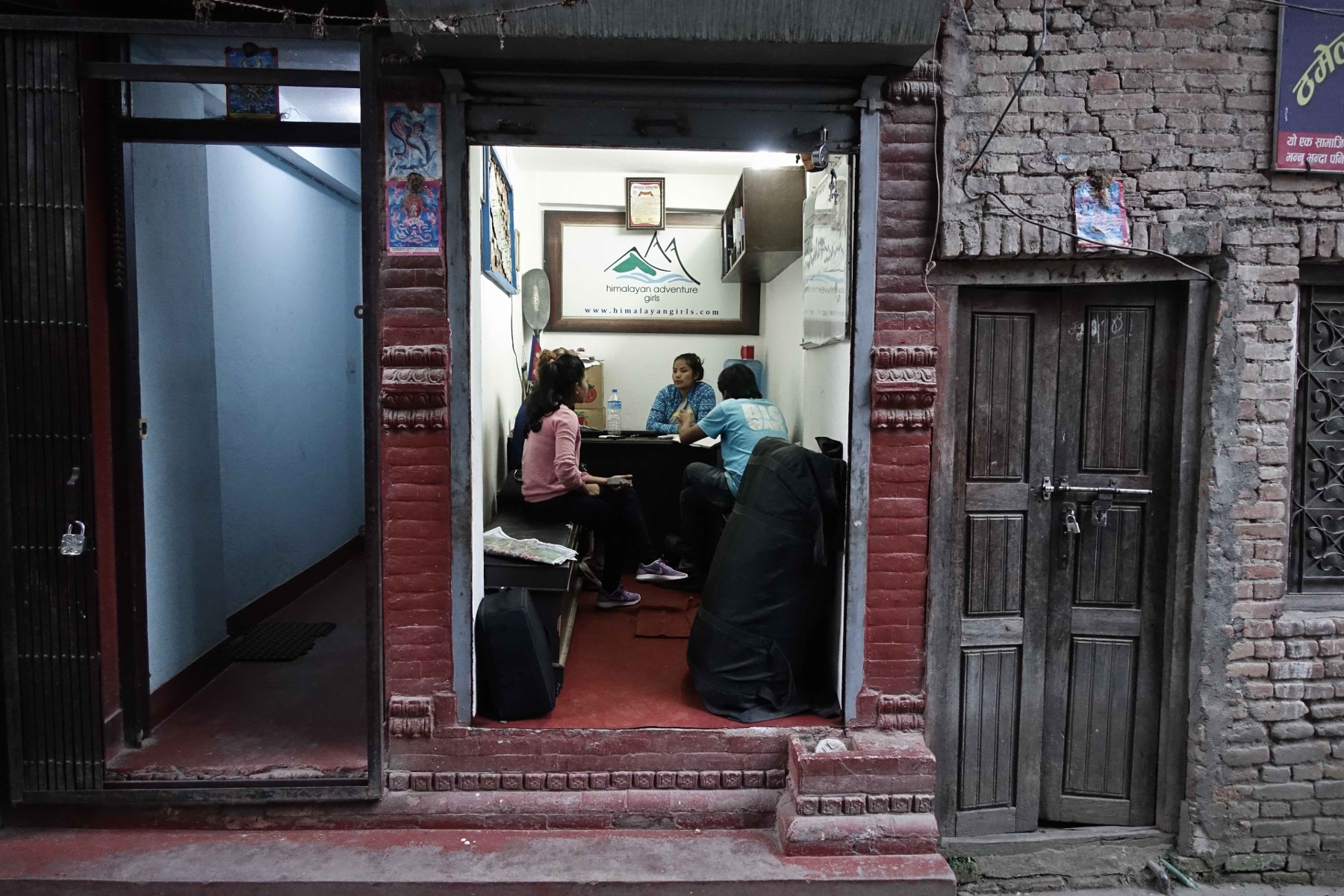 So, who are the other Himalayan Adventure Girls? Radha and these three ladies may have unique stories but their love of rivers joins them. Today they’re certified raft, kayak and adventure guides. These four ladies make up a growing group of badass women who are changing what is possible for women in adventure sports in the Himalayas.

Sita, featured in the film, Changing the Flow, loves the water. Growing up in Lakeside, a tourist area of Pokhara, Nepal, she learned to swim as a young kid, something uncommon for girls in Nepal. Her love of water drew her to Inka, who in 2008 became her mentor and kayaking teacher. There were no female raft guides in Nepal at that time, but Sita made it her goal to become one. She secured employment as a guide and became an integral part of the Himalayan Adventure Girls. She began teaching other Nepali women to paddle and has traveled to Sweden to paddle with Inka.

Kamala comes from a small village close to Nepal’s Bhote Koshi River. In 2004, at the age of twelve, she took part in a project where village children got a chance to learn kayaking. Kamala joined the first Himalayan Adventure Girls trip in 2008 and became employed by a rafting company at a resort close to her home. Today she continues to run the Himalayan Adventure Girls company with co-founder, Sita. She guides raft trips, teaches kayaking and is also a trekking guide.

Anu grew up in Kathmandu and had no interest in the traditional life of Nepali women. She instead participated in activities like martial arts that were considered for boys only. While working at a beach resort on the Trisuli River she leapt at the chance to learn to kayak, not letting her fear of the river or the fact that she couldn’t swim stand in her way. She met Inka and the girls at a kayak competition and joined their team shortly after. 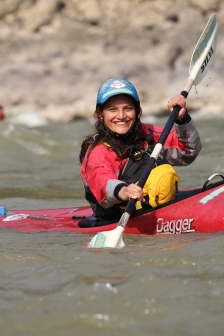 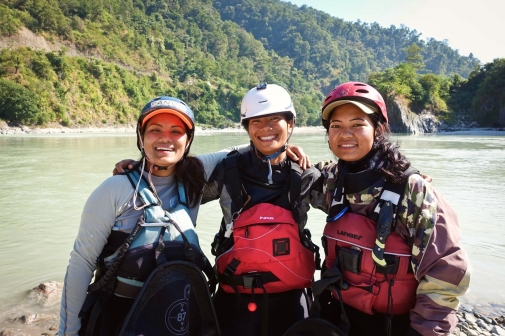 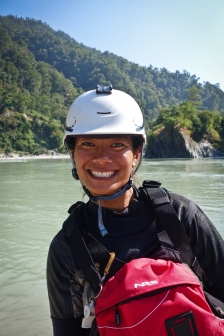 As one of the four owners of Himalayan Adventure Girls, Radha reflects on her first years in the whitewater industry. With the skills she gained from the Sun Kosi training expedition, Radha accepted an invitation to take part in a 45-day commercial rafting certification course. In just a couple of months, she became one of the only certified female whitewater guides in Nepal.

After training, she started working for a local rafting company, gaining experience on many river trips. Radha still faced many challenges, mostly related to her gender.  “When I started in this field I needed to work with men because there were no girls in the industry.” Guiding is not seen as a women’s profession. Many people discouraged her, talking behind her back and testing her will and resilience. There were times when male colleagues sexually harassed some of the girls. Others told them to quit, to give up. And the men often asked them to stay on the beach and cook instead of getting on the river. But together they have persevered.

“I think, if I did not work in this field I would be married, with a baby, and not have the opportunity to see other places.” As a raft and kayak guide with outdoor certifications including whitewater rescue technician, first aid and a Nepal tourism certificate that allows her to guide commercially, she works half the year in Nepal and the other half abroad in Iceland, Dubai and Japan. 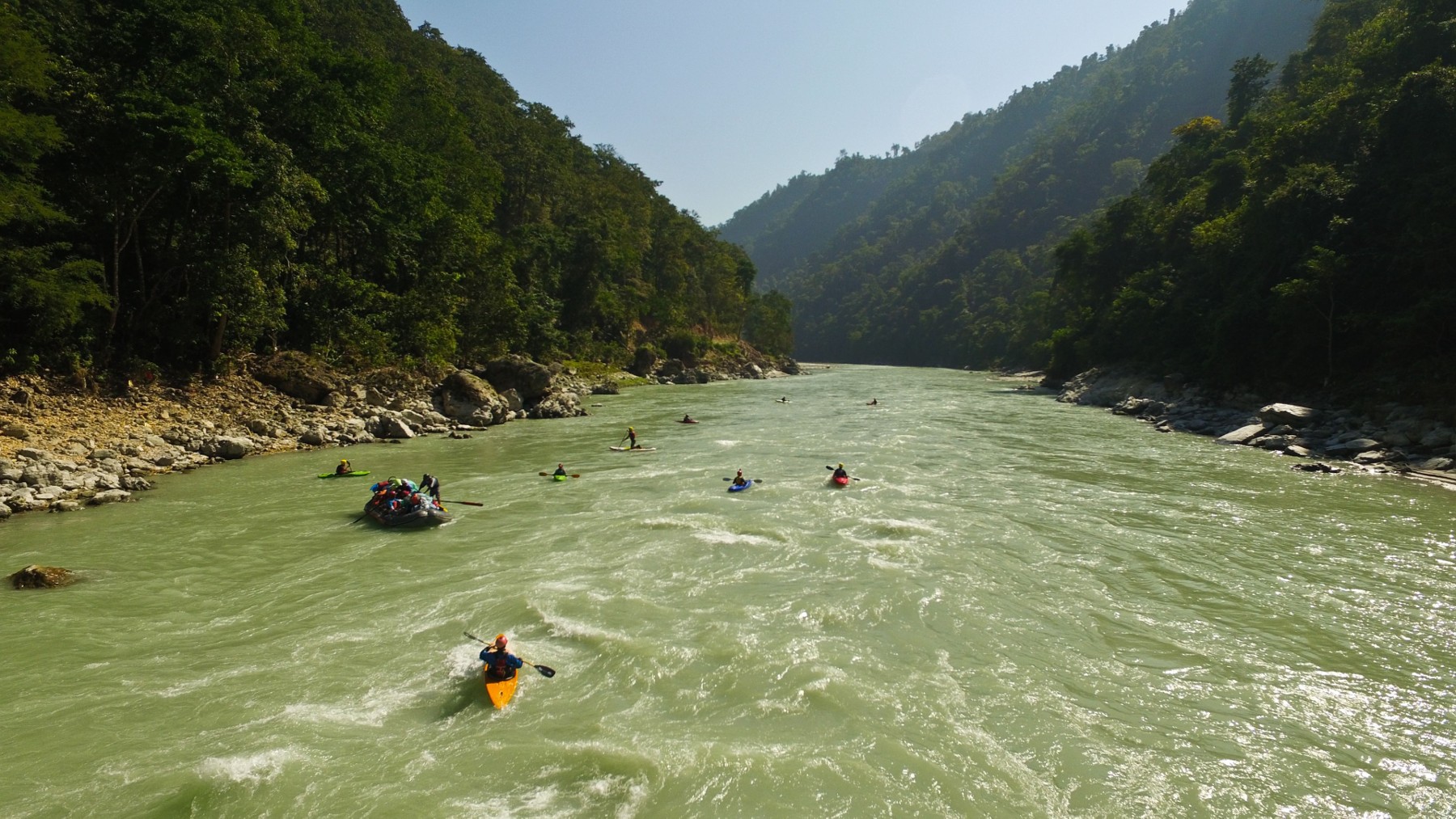 A story with heart, in a region of the world so vibrant with colors and contours, it’s no wonder adventure sports filmmaker Bjarne Salén wanted to tell this story. “These girls guide on some of the most treacherous rivers in the Himalayas, all while on a mission to make Nepal and the world a better place,” he says. “Most tourists don’t fully experience the hardships and difficulties of those who are living in Nepal, especially the somewhat secret lives of women.”

In the international outdoor world, these women are well respected. In Nepal, they are still up against gender inequality and traditional thinking. ”It’s clear these ladies have come a long way in dispelling the idea that women can’t work in the outdoor industry, but they still have a long way to go.” Bjarne witnessed how hard the ladies have to fight to gain respect, on and off the water. He’s also watched them push back and challenge the ‘system.’

He recalled an evening when he was sitting around the fire having a beer with the local guys. Anu sat down and cracked a beer too. “I loved it! She really showed, again, that being a woman is no different to be a man—you can have a beer at night with everyone else! These ladies are still fighting to change a lot in Nepal for the better, to make it fairer. They are changing the flow more and more. I’m stoked to share their life experiences.” 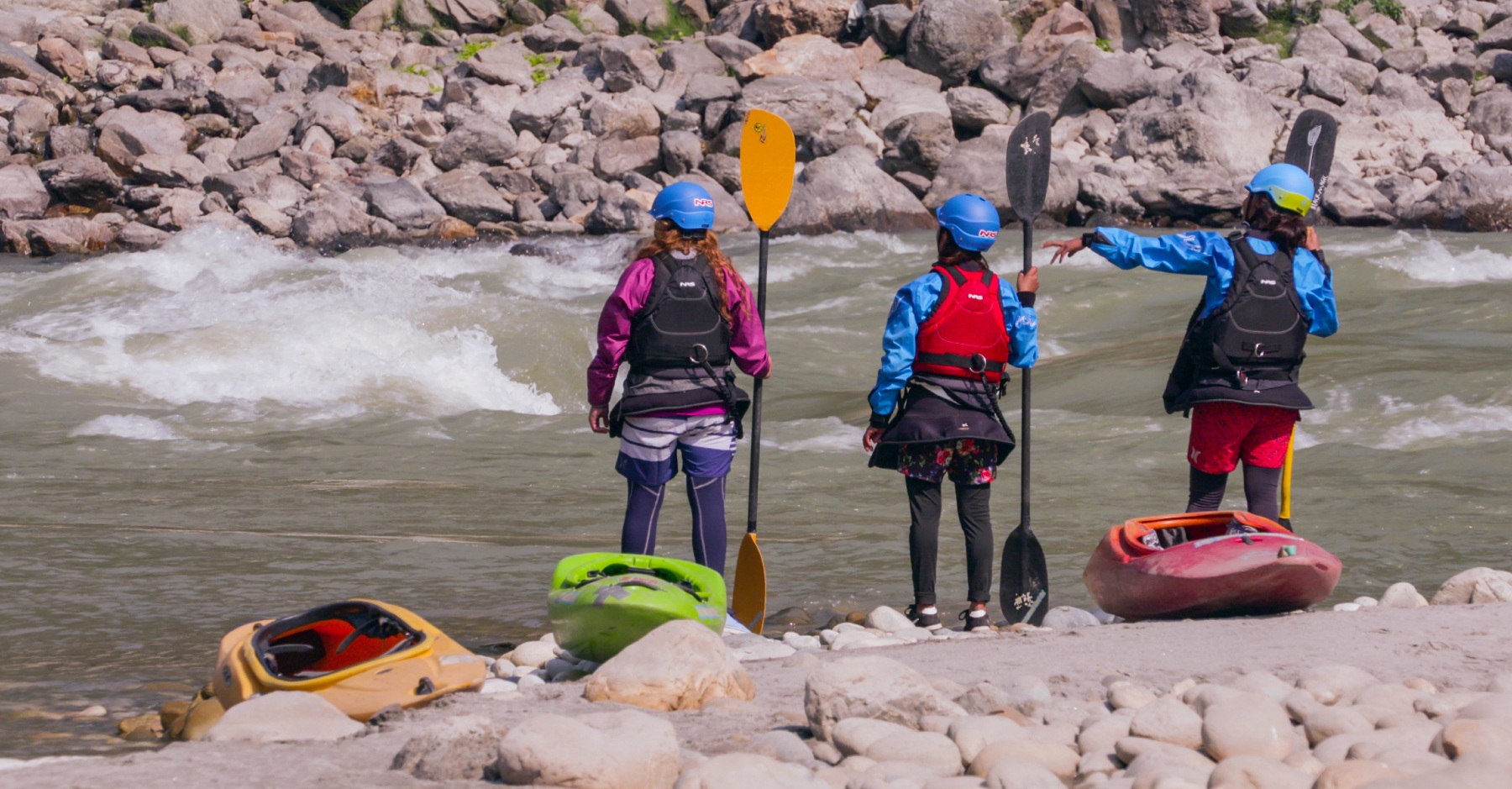 Inka, Bjarne and the Himalayan Adventure Girls hope their film will show that empowering women in Nepal is not only good for women, but it is also good for all of Nepal.

Editor’s Note: Carmen originally wrote this piece in 2018. It has been edited slightly to reflect a more current representation. Photos, unless noted, by Bjarne Salen. Don’t miss the film, Changing the Flow, which tells the story of Sita Thapa and the Himalayan Adventure Girls.