The Ghost Ships of Mallows Bay

The Potomac River has a long established history in the Mid-Atlantic, especially among paddlers in the greater Washington D.C. area. Seasoned whitewater paddlers can take on rapids in Great Falls Park, city dwellers and tour groups can cruise by the banks of Georgetown, Watergate, the Lincoln Memorial, or navigate farther downstream through the brackish waters near the Chesapeake Bay.

The Potomac River is truly a “pick your own adventure” kind of waterway, which brings us to a small patch of water, 30 miles downriver from metro D.C. Here you’ll find the most unexpected sight of human engineering, a forgotten history that nature is slowly reclaiming. The Ghost Ships of Mallows Bay. 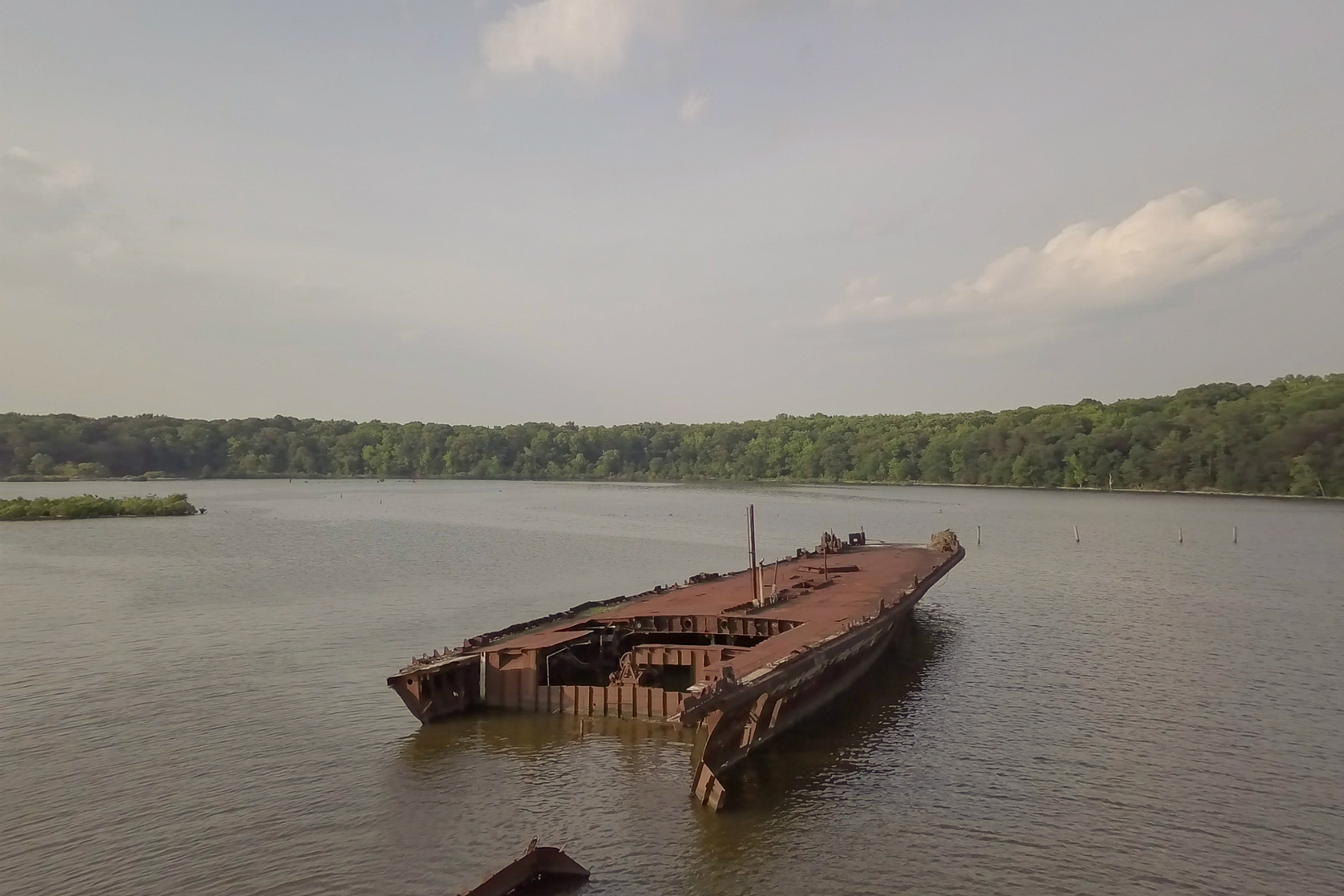 As a stand-up paddleboarder, I enjoy flat water, white water, and ocean surf. I’m stoked to simply dink around in my local pond; it’s really just about getting on the water in my book. Because of this, I like to find unique waterways to paddle near places I travel through frequently. This is how Mallows Bay made it on my radar, and ultimately how I ended up filming this unique sight for the Amazon Prime Video series I host and produce: AWOL – Air Water Or Land.

The Potomac Rivers cuts right through Charles County, Maryland, creating a natural border with Virginia. Once you arrive at Mallows Bay Park, you get your first glimpse of several ship-like silhouettes only a couple thousand feet from the parking lot. Within this bay lie hundreds of World War I merchant ships run aground into a shallow grave, perfect for paddling around. 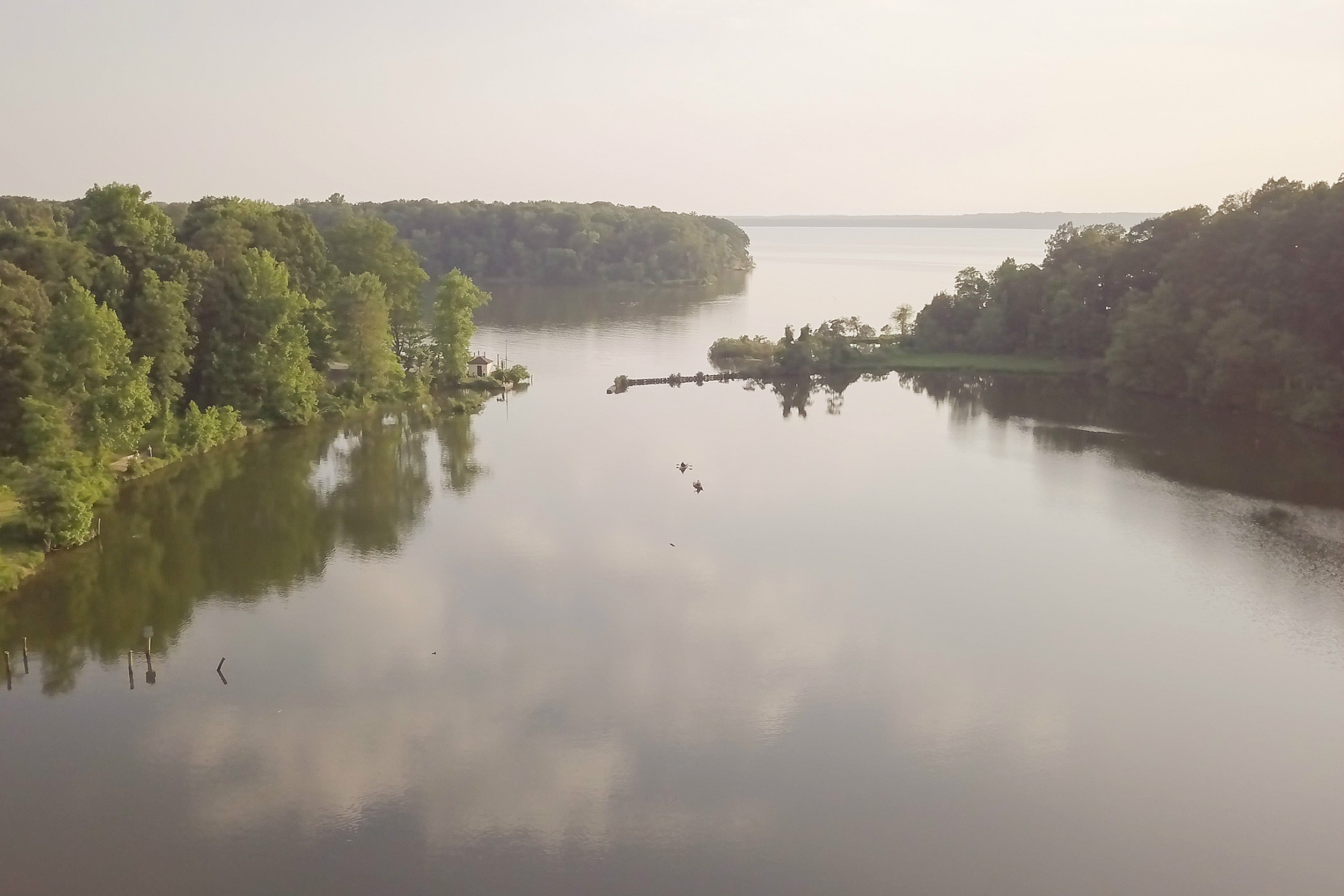 Typically, I would explore this area alone, but since AWOL is part-adventure series, part-travel series, the owner of a nearby kayaking tour company, Kim DeMarr, guides us through this garden of shipwrecks. This actually worked out even better than I expected. Kim, a former employee for the previous owner of the guide company, purchased the business with her husband in 2018. She’s filled with far more knowledge than any internet search could ever muster up.

As we paddle our kayaks out into a slight headwind, Kim begins to point out all of the history lying under the tideline. She points out the most noticeable ship from the shore is the S.S. Accomac, a car ferry used to transport people and cars across the Chesapeake Bay from the Virginia Beach area prior to the completion of the Chesapeake Bay Bridge Tunnel. A crew later sailed it upriver sometime in the 1980s and run aground with zero worries of legal consequence. A—now outdated—gray area in the law allowed scuttling of ships along the Potomac. 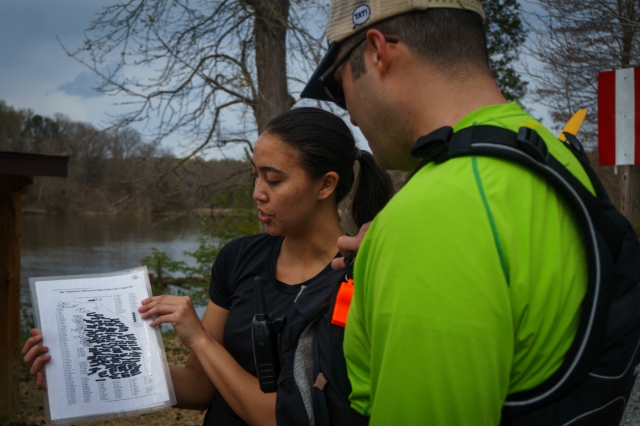 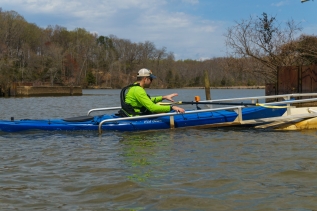 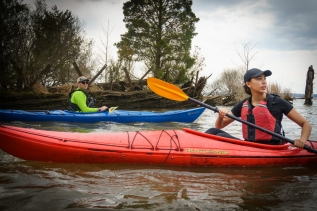 Kim pointed out additional history along the shore. Historians have identified some of the ships only visible during the lowest of low tides as dating back as far as the Revolutionary War. At this point, this park-n-play leisure paddling site is easily checking all the criteria for the one-of-a-kind paddle-destinations category.

Once up to the Accomac, you can start to see how nature has completely reclaimed all of the ships. Despite clear signs of illegal metal salvaging, the rest of the Accomac has slowly rusted away, returning to the river floor. Atop what is left of her deck, birds of prey like the osprey have built nests to perch high above the water, taking advantage of the wildlife-rich environment below that all the wooden ships have created from their nearly 100 years-long residencies and decades of decomposing. As much as you’d think the more modern ship would take away from the century-old merchant ships that primarily dominate the bay, it fits right in inside this strange collection of history. 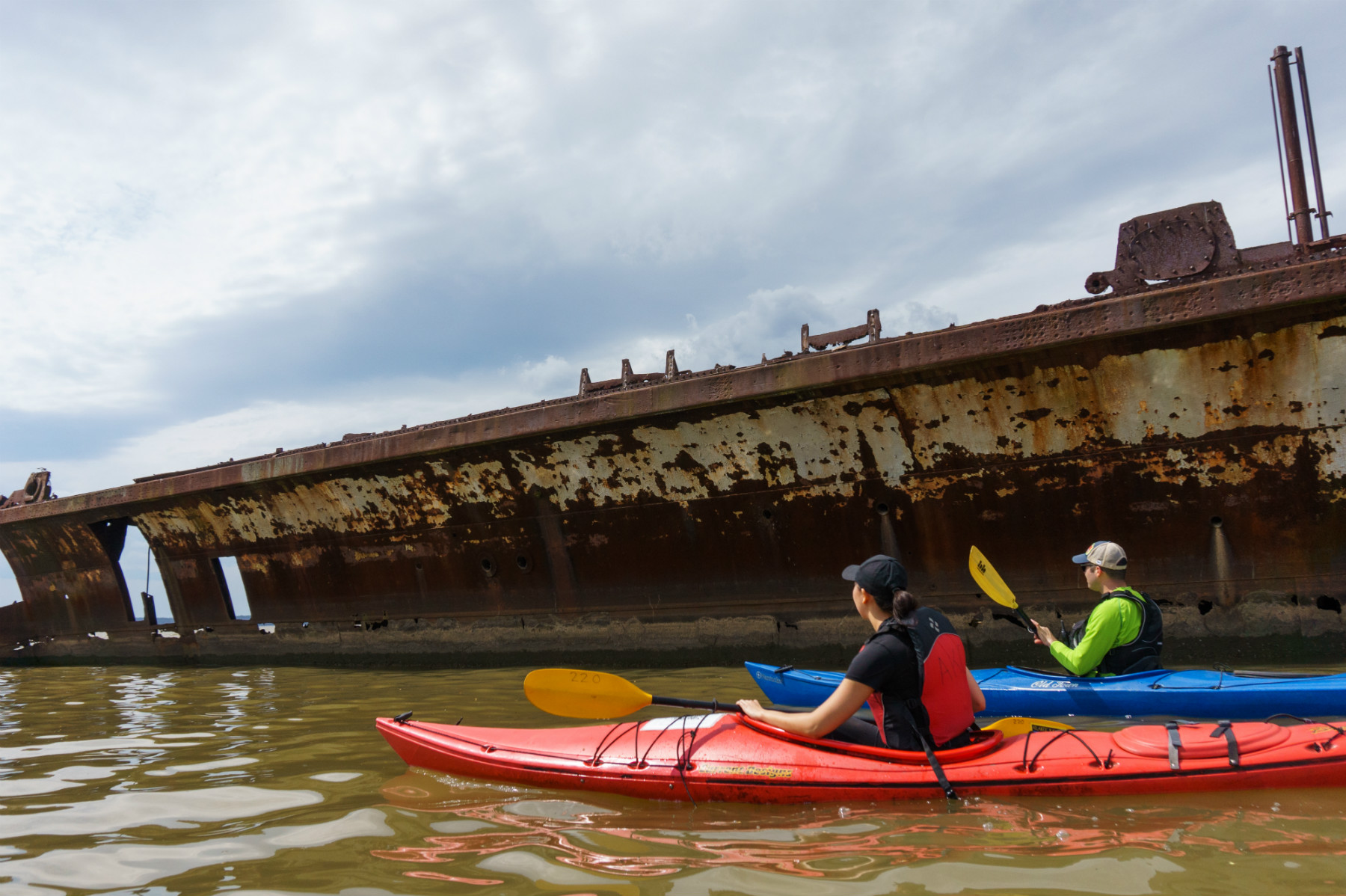 Paddling toward the main channel of the river is where you can truly take in the full spectacle of the WWI Ghost Fleet. Literally, hundreds of wooden ships lie submerged amid the choppy waters, several of which still resemble something that once had the ability to sail across the Atlantic Ocean in wartime.

Other ships sneak up on you as their wooden hulls and decks have succumbed to the water, leaving mostly skeletons made of metal rivets fighting a losing battle at a slower pace than wood. Again, our guide’s knowledge continues to impress us, as she not only identifies ships by name but also shares details of the bizarre inferior workmanship that plagued the Ghost Fleet from the start. 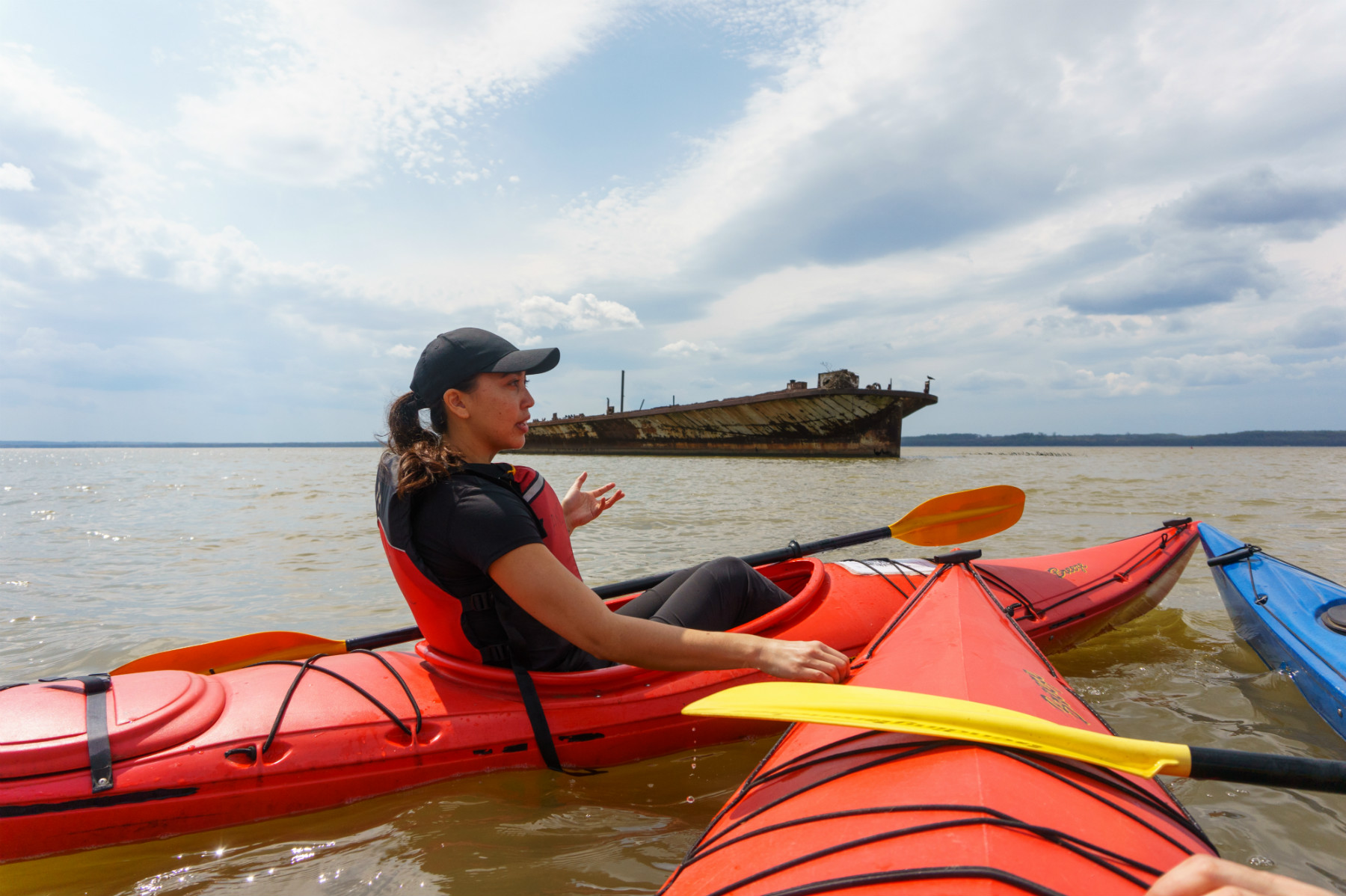 Many skilled shipbuilders were either off fighting on the front lines or helping build and maintain warships for the Navy, she explains. And considering the government’s seemingly impossible order of hundreds of ships in such a short period of time during the war, the quantity needed outweighed the number of able builders. To make matters worse, wood had long been obsolete in shipbuilding but yet another war-time sacrifice was to save metal for bombs, ammo and other top military priority.

Combine the large inexperienced workforce of average Americans taking up jobs to do their part during the war, they helped rapidly build outdated designs that wouldn’t even make it to service before the war ended. Many ships had used wooden pins, bolts, and rivets to save on metal. One of the wooden steamships was so poorly built it had been outfitted with a mast and sail because it wouldn’t go straight without it. 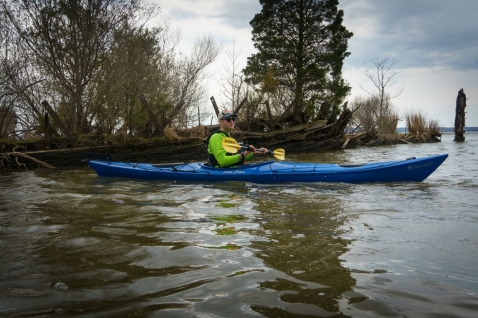 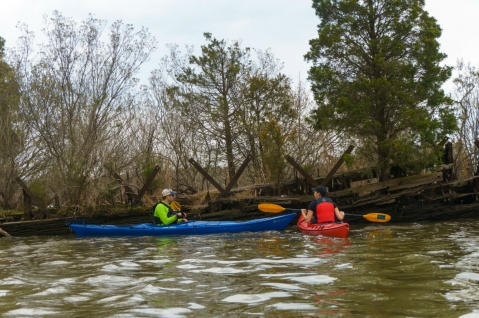 By this point, we haven’t even traveled a mile in the murky waters but it’s clear you could spend hours, if not days weaving your way through all the disregarded pieces of American history and never find an end to new discoveries and interesting artifacts to see.

But with our time running short, we have just enough time to explore Three Sisters Cove. Crews discarded three ships in this sheltered cove, leaving them just deep enough to allow continual movement and shifting in their first few years. The boats finally settled in a perfectly guarded, triangular-shaped haven. 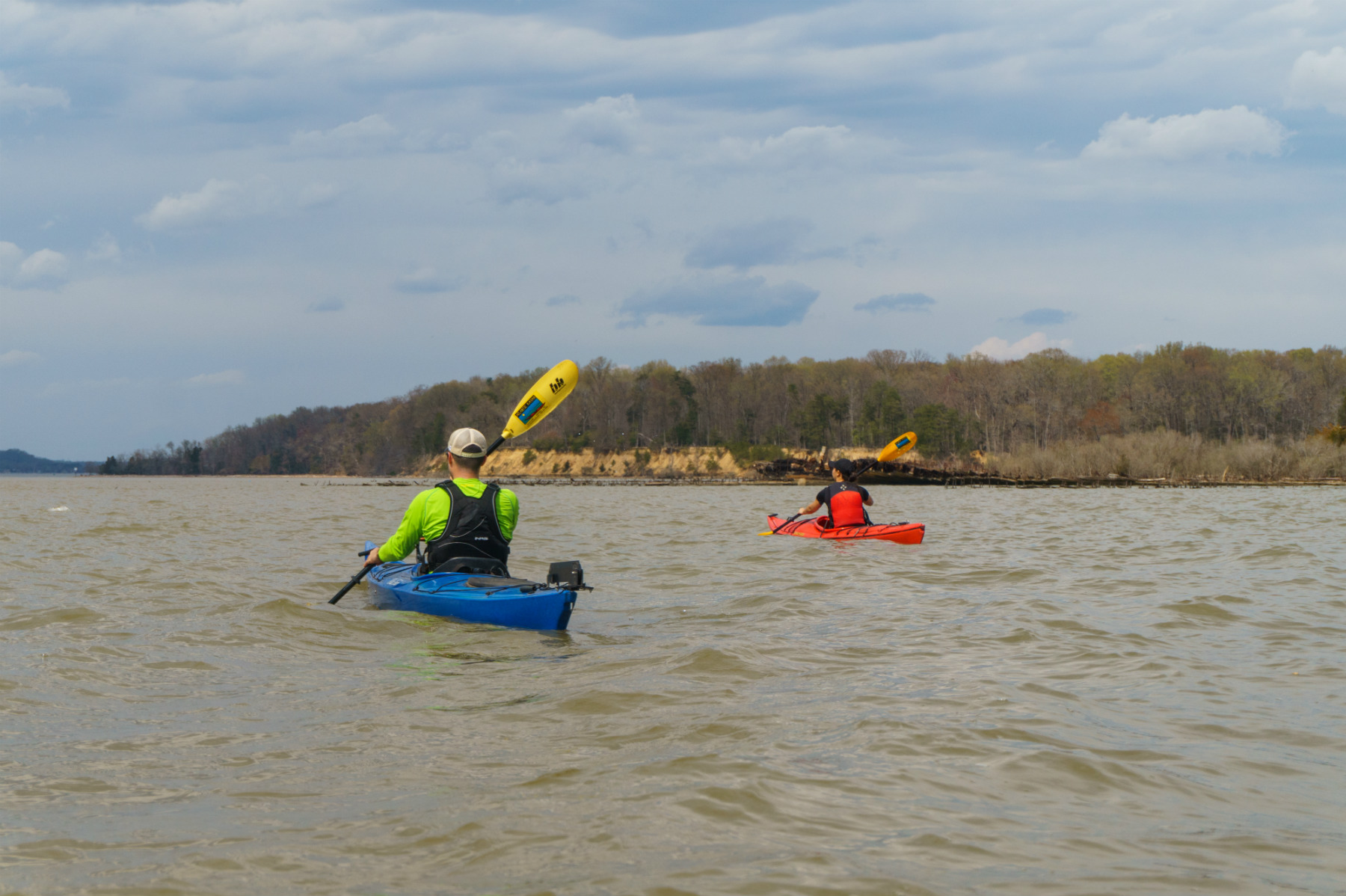 Beavers have completely claimed one of the ships, using the ship’s materials to build their dams inside the cove’s calm waters. The beavers even cut clever little “channels” that span across the ships hull to save on having to go all the way around to the main entrance to get back to their dams. It just made me even more curious to know what other surprises are waiting among the rubble and ships.

As the crew and I paddle back to shore, osprey, blue herrings and Bald Eagles soar above us like some naturally occurring patriotic product placement. I’d like to think this place is pretty rare since most shipwrecks are found off the coast in salt water and often only accessible by longer boat rides. In an age of social media where elite adventurers share perfectly documented adventures in breathtaking, yet remote or exotic destinations, I’m reminded that I don’t need to go through all the troubles of global travel or permit lotteries to find my sense of adventure. 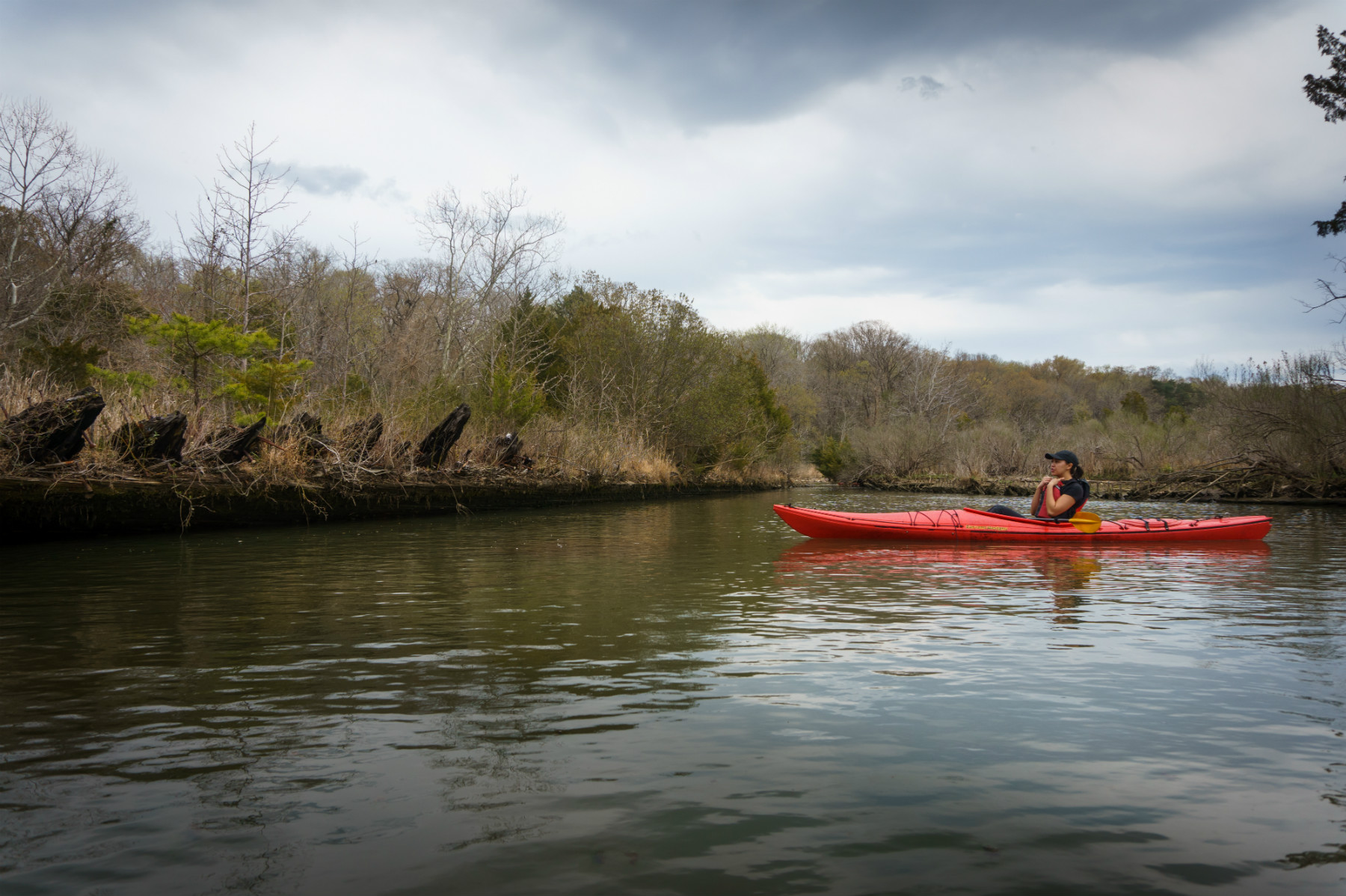 I personally hope to help spread the message of accessible and inclusive adventures and to find and share jaw-dropping paddling locations that lie in people’s backyards. Mallows Bay hit that mark, a family-friendly spot that you can drive to and within a short paddle, you’re among giants of history. If that isn’t an epic, insta-worthy adventure, then I don’t know what is.

Editor’s Note: Guest contributor Angel ‘David’ Verde is a Honduran immigrant and US Air Force Veteran, an avid outdoorsman, surfer and standup paddleboarder. Currently, he is the producer and host of the new outdoor travel series, AWOL – Air Water or Land.