How do we, as women, prioritize joy, and make it our life’s work? And even make a good living at it?

If you’re Anna Levesque, you ask the naysayers to keep their voices down. You get comfortable being one of the few girls in the room, on the river, in the truck. You put in your time, hone your skillset and give thanks to support systems. And you learn to greet barriers with the new day—and to break them down. And when you have clarity in the value these tools are bringing to women, on and off the river, you create a life in helping other women do the same. 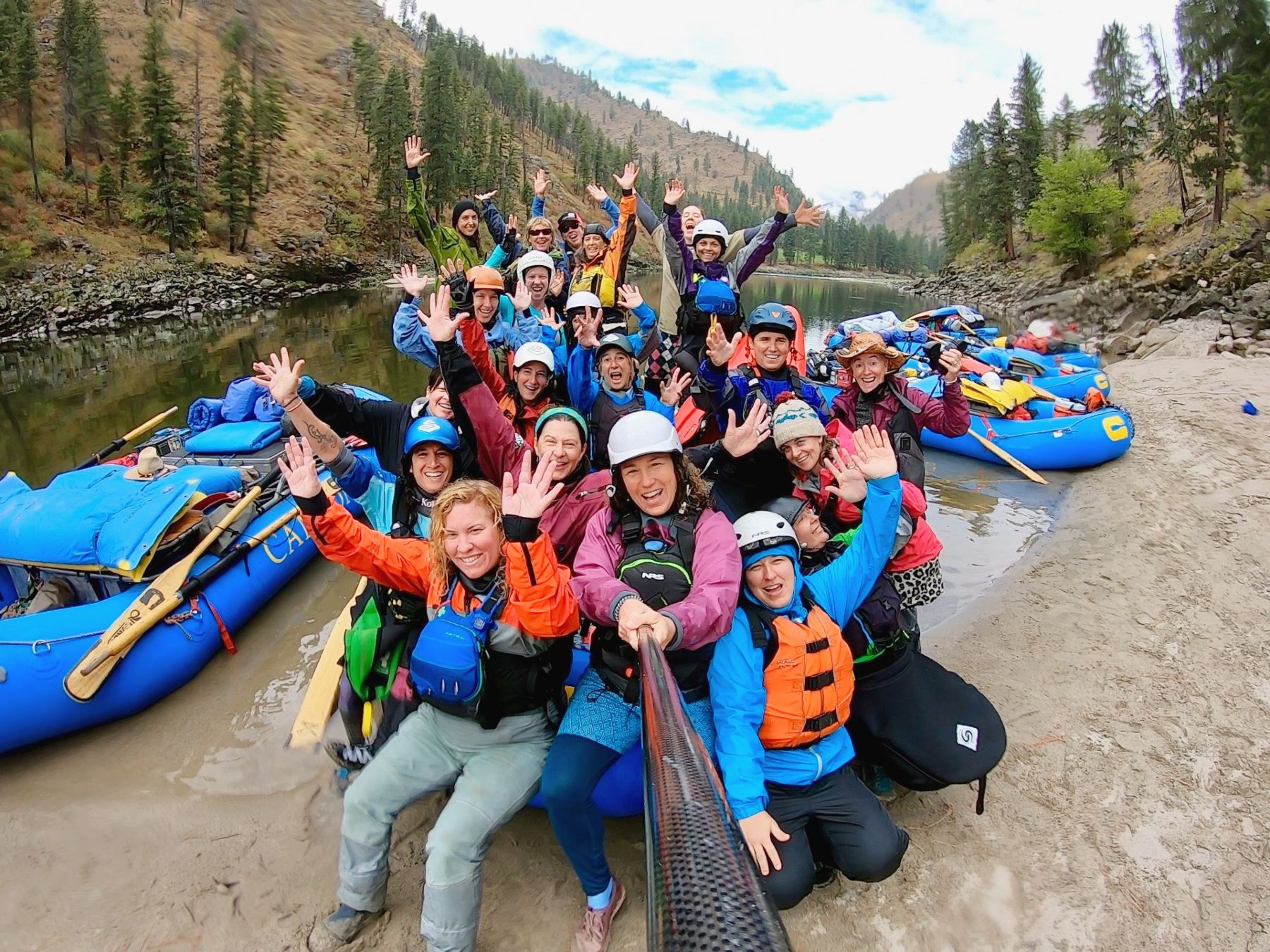 Twenty-seven years ago, Anna might have told you she had plans to follow her father into the field of Law. In knowing her, I can see how much sense that would have made; she’s bright, quick-witted, and invested in bettering the lives of those around her. She graduated from university after studying international studies and political science. But instead of taking those degrees, securing an internship and applying for law school, she stuck with this one summer job that had changed her career trajectory entirely.

“I was looking for a summer job in college and a local rafting company was hiring. They must’ve laughed because I walked in trying to be all professional. I didn’t come from an outdoorsy family and the culture of rafting was entirely new.” The company hired her on for a position in the kitchen. Soon they promoted her to reservations. And while she worked there, she started kayaking.

“It was like a whole new world. A world full of people who prioritized joy and doing what they loved. I was really enthralled with that. And I loved being out on the water.”

Anna had found kayaking by chance. She wasn’t introduced to the river by a family member, or a boyfriend. In a decision that was wholly her own, she chose to stay in this new world she’d found. She would compete, and teach, and continue to learn. And she would do all these things as one of few women in a river of men.

“To follow this new passion around water I was now having to re-prioritize.” Anna didn’t make a ton of money raft guiding, but it gave her the flexibility to travel and kayak. “The trade-off to not having a good paycheck was that I felt fulfilled [and] I met so many amazing people.“

Anna would go on to excel as a freestyle kayaker who’s paddled and competed in over 12 countries on five continents. Throughout her competitive career she would become a five-time member of the Canadian National Freestyle Kayaker Team and land a podium spot at the Freestyle Kayaking World Championships.

She was, by all measures, a professional kayaker, and yet, even within so many successes, she struggled with self-doubt and a lack of confidence. Doubt can easily plant all the wrong seeds for the internal dialogue that goes on in the minds of paddlers. While navigating difficult Class V whitewater with mostly male colleagues, it’s certainly an unwelcome guest. 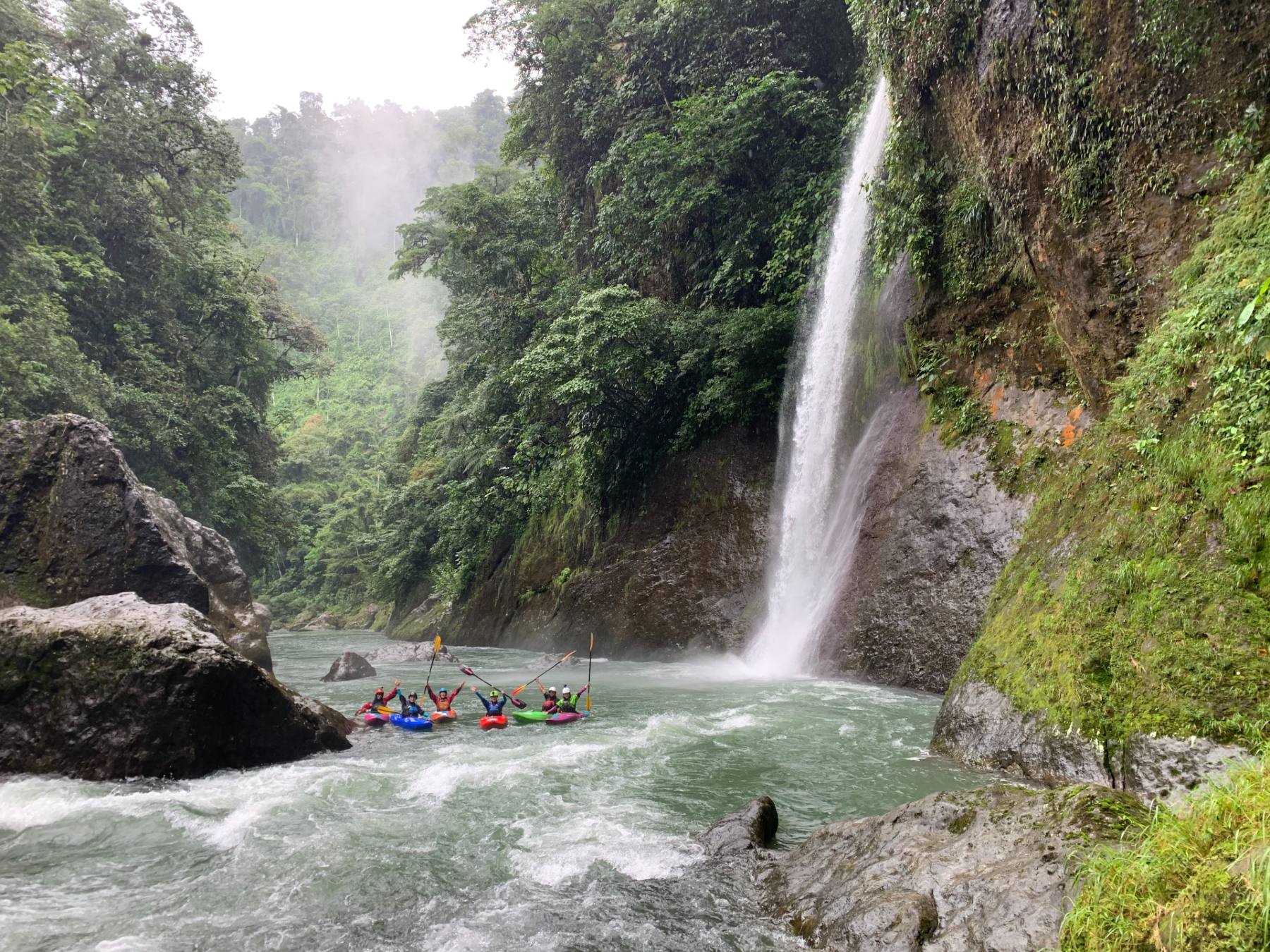 “Confidence is an integral part of success on the water, just as in life,“ she says.

In connecting with other female boaters, Anna found a common thread among them. Female-specific resources were scarce and a developed community for female paddling stories to be told didn’t exist.

Anna knew she had a natural facility for instruction. During her years on the competitive circuit, she had trained as an athlete, so she knew the physical instruction it took to improve paddling. And her mom was an educator throughout her childhood, as well, which inevitably rubbed off on Anna. She had an idea to create the needed resources for instruction, and in doing so, begin to construct a welcoming community for women in paddling.

In 2004, Anna released her first instructional DVD for women in kayaking, Girls at Play. It premiered at the Whitewater Symposium hosted by the Nantahala Outdoor Center.

“I didn’t care as much about the instruction piece then, I just wanted to empower women and create a belonging for us. [That day] I just remember my heart pounding out of my chest. It was so hard having to watch it in the same room as everyone. I got a standing ovation. It really blew my mind and gave me a lot of confidence in what I was doing. I knew then that there was a need for me to keep on doing it.” 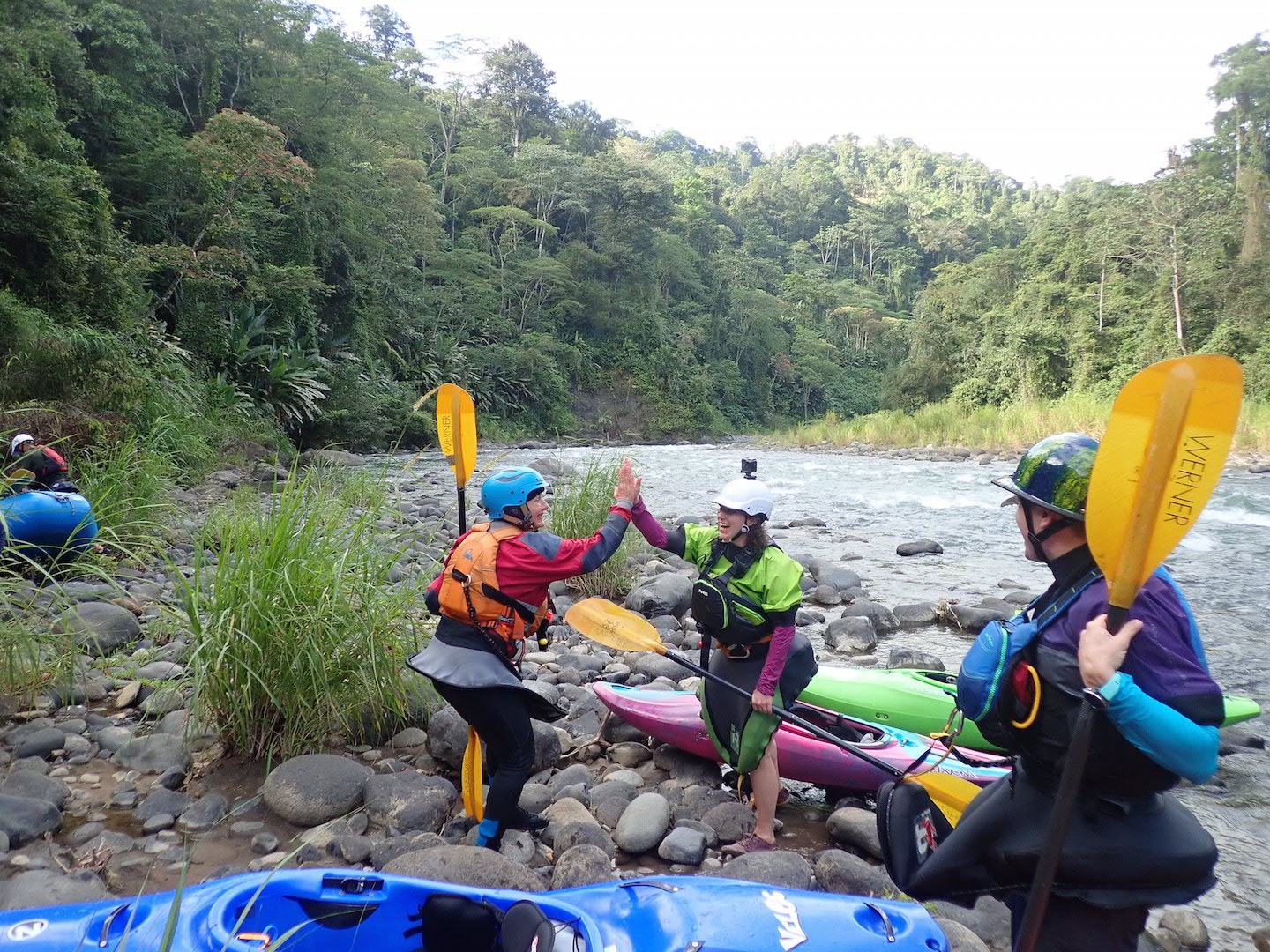 The DVD release shined a light on how many women wanted to belong. And to belong, they needed to learn. And they wanted to learn in a way that was welcoming and approachable. That need for female-specific education led to Anna teaching classes for women at paddlesports retailers across the country. And those classes just kept filling up. Over the next few years, she would produce several more instructional DVDs and lead women-specific trips in the U.S., Canada, Mexico and Costa Rica.

Anna brought more than instruction to her classes and trips. She brought with her a desire to instill the importance of the connection between the time spent on the river and the effects that time has on the rest of our days.

“Kayaking is one access point to create more courage in all areas of life. The same can be said for stand-up paddleboarding.”

The success that Anna found in creating spaces specific to women came with some pushback. She had critics. Not everyone out there was interested in exploring what they considered the ‘softer side’ of river running. On the other hand, she had some core male relationships—men that always advocated for her and had her back on and off the water.

Anna teaches that empowerment can be found through adventure and health, from what she refers to as the mind, body, and adventure connection. She speaks to the advantages of not compartmentalizing these important pieces or separating them from the whole of ourselves. That to feel courageous and confident, we must also feel well. And that wellness can happen without perfection or crazy rules. To simply have an awareness of what is important to us, can guide us in making better choices that are more in line with our goals going forward.

“So many people think that they don’t understand why they’re so fearful in kayaking, for instance, but if they actually look there are many other areas in their lives where they are fearful as well. It’s really quite hard to feel courageous and confident even most of the time. You have to take care of how you’re feeling in mind and body in order to adventure at your best and to show up well in all areas of your life.“

Today, Anna is the Owner and Performance Coach at Mind Body Paddle. Her passion for wellness and kayaking has turned into a successful career. As an instructor, she provides private and group whitewater kayaking lessons. As an instructor trainer, she certifies both SUP instructors as well as SUP yoga teachers. She also practices health coaching based in the 5000-year-old sister science to yoga called Ayurveda.

In addition to her business, Anna is a member of various SUP and river kayak committees through the American Canoe Association (ACA). As part of her involvement on the ACA’s Diversity, Equity and Inclusion Committee she’s working with the Paddlesports Action Committee to put together a Person of Color Leadership Academy.

Anna lives in Asheville, North Carolina, a city known for its unique, edgy, artsy and inviting personality, and home to some of the region’s best river playgrounds. It’s well-fitting that she has made her home in a city surrounded by mountainous rivers.

As I wrote this, Anna was leading a Women’s Wilderness River Retreat down Idaho’s Main Salmon River. The attendees of the retreat were both experienced paddlers and river newbies. Some sought adrenaline, while others opted for the river’s more conservative lines. Anna supported and encouraged each of the paddlers’ desires.

In the coming spring, Anna plans to lead a SUP retreat in Barbados. Ladies will experience a week of standup paddling boarding instruction, yoga classes, adventure, and health coaching. 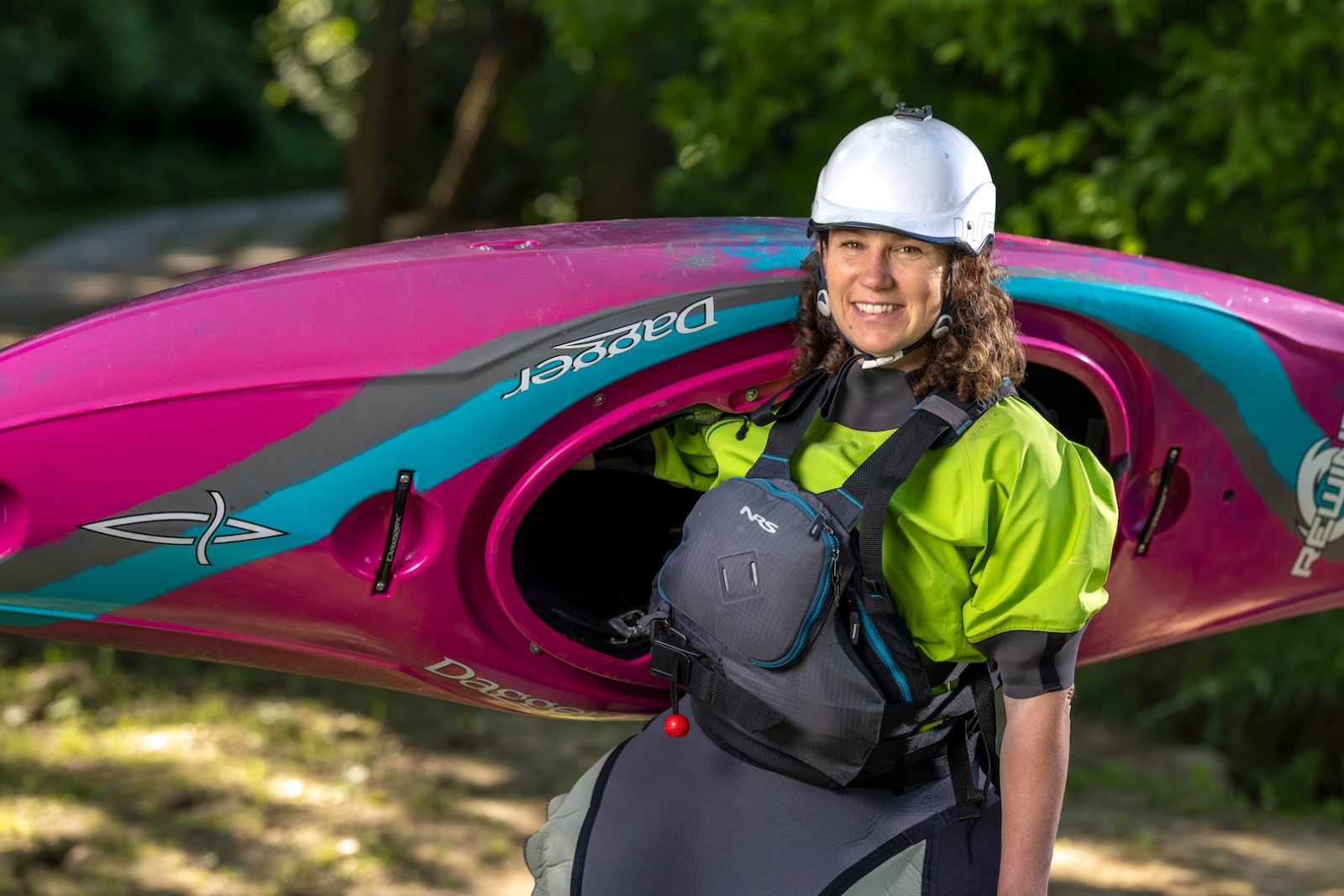 “It’s not that I’m this enlightened being, empowering others. I have to, and have had to, walk my talk alongside these women. I can paddle challenging whitewater, absolutely. What my challenge has been is to grow confidence in myself and in my value. And to stand in that. By doing that I am empowering other women to do the same.”

Anna has built a business in reminding us how to be our most inspirational selves. She’s here to coach us and to educate us—on and off the river—and to us acknowledge the importance of mental (and physical) wellness, something that too often gets lost in the noise of life. We should all count ourselves lucky she took that summer job.

Editor’s Note: Guest contributor Megan Kieninger is an enthusiast of all things outdoors, and lives in Western North Carolina with her family. She is part of the NRS family as Wholesale Account Manager for the Southeastern US. (Feature image credit: Rob Giersch)